Giveaway. Getaway. Got away. All is well in Thailand. The rich get richer. The poor get tips. The middle class click "like".

In the immortal words of Gordon Gecko (Oliver Stone’s 1987 film, Wall Street), "Greed, for lack of a better word, is good. Greed is right. Greed works. Greed clarifies, cuts through and captures the essence of the evolutionary spirit."

So do not knock the 3G auction by the National Broadcasting and Telecommunications Commission (NBTC) that saw the kingdom’s mobile triumvirate – Advanced Info Service (AIS), Dtac and TrueMove – all smiling and shaking hands, having each won their maximum quota of 15MHz of spectrum.

Sure, critics have called it a cheap and ridiculous auction. Of course, they say there was no competition, but a complicit collusion between big business oligopoly and the NBTC to rape taxpayers’ money. 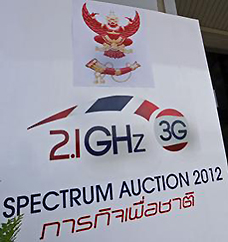 The 3G spectrum auction is held at the National Broadcasting and Telecommunications Commission (NBTC) in Bangkok on Oct 16, 2012. (AFP Photo)

But hey, this isn’t Sotheby’s, okay?

Of course, the total loss for taxpayers is over 16.3 billion baht, based on price recommendations made by Chulalongkorn University economists hired by the NBTC to consider benchmark prices.

But hey, the NBTC isn’t some bargain-savvy street vendor, all right?

Indeed, what did we expect when the auction involves an old technology on the edge of mortality in its life cycle, while other countries are already going 4G and 5G? It’s chocolate fudge no matter which way we look at it.

A study by the National Institute of Development Administration (NIDA) showed Thailand's GDP would have benefited from 3G network investments worth US$7.74 billion to $12.45 billion from 2011-14 if the technology had been adopted in 2010, the date of the last scrapped auction. The 3G delay caused economic losses of between $4.12 billion and $4.62 billion the past two years.

But why be negative and focus on the past? What's done is done, at least the 3G auction is now done. More delay is more loss.

Look on the bright side, the banking sector licks its lips, expecting tens of billions of baht in new investment by mobile operators. Relevant businesses rub their hands, looking at some 120 billion baht in infrastructure investment projected for the mobile phone sector over the next three years.

It will be a boom. Perhaps not a big boom, but a boom nonetheless – and if it’s a boom, then everyone wins.

Look at the big picture. The poor are getting their share of the cake in populist policies such as the 300 baht minimum wage and the rice pledging scheme. What to do with that 15,000 baht per tonne of white rice? New motorbike and 3G phone, that’s what.

The capitalist elite's stranglehold on the Thai economy tightens, courtesy of government agencies that give the biggest bang for their baht. Forget feudal Thailand, the capitalists are on their Ferrari horses, yelping, ‘’Tally-ho, boys! Charge! Charge! But watch out for the tanks!’’

And since the middle class works for the capitalist elite anyway, we can expect bonuses and pay raises from this super mini boom, oh joy. We can also log-on easier to click like, upload instagram and update location and stuff, oh double joy.

Small and medium enterprises (SMEs) can feast on the leftover crumbs and be proud of practicing sufficiency economy, rather than greedy capitalism. It’s the noble Thai way.

You see, it is all a matter of perspective. If we choose to be positive, then we can see that everybody wins.

Now the NBTC did not demand obligations from or impose repercussions on the big three triumvirate to provide affordable and high quality service to consumers. But that’s okay. Big business can’t get bigger without friendly help from government agencies.

And since Thailand is all about freedom and democracy the NBTC is on the record as saying it expects free market mechanisms to encourage clean and fair competition among the big three anyway, for the benefit of consumers.

Just like the free and fair competition in the auction bids on Tuesday, we should expect oligopoly capitalists to do right by the consumers without government imposed conditions. Yes, we should believe what we are told and do as we are told. Don’t question things; it’s not the Thai way.

Of course, critics lament that consumers will end up paying overprice for the privilege of using an outdated technology with questionable service quality. But again, let’s not dwell on negativity, but instead focus on the big picture.

The lord gives tips to the poor in populist policies and riches to the rich in strengthening the oligarchy on the cheap. Meanwhile, the middle class will consume anyway and can always hope for bonuses and pay raises.  It’s the circle of capitalistic life.

We should be proud that in a poor, peasant, agricultural, developing country, we can boast so many in Forbes magazine’s richest in the world. Yes, we should be proud of our social betters. We are Thais. We respect the hierarchy.

Like as not, if we are to consider the words of Gordon Gecko, we are simply adopting the American way:

"The richest 1% of this country owns half our country’s wealth, five trillion dollars. One third of that comes from hard work, two thirds comes from inheritance, interest on interest accumulating to widows and idiot sons – and what I do, stock and real estate speculation. It’s bullshit. You got 90% of the American public out there with little or no net worth."

Another upside is, we don’t have to worry about 4G or 5G anytime soon, because the oligopoly must milk 3G for all its worth first. Therefore, as an added bonus, we don’t have to endure the annoyance and frustration of another cheap and theatric auction scheme that is more of a giveaway rather than a free and fair competition.

So yes, at the end of it, everybody wins. The only loser – if we insist on being cynical – is perhaps the Kingdom of Thailand, as we will be stuck with a technology nearing the end of its life cycle over the years to come, while Laos, Cambodia and Vietnam are already moving on to 4G and 5G.

But who cares about Thailand. There’s no place for nationalism in the world of capitalism. Money has no flag, no boundaries and no musical anthem.

In 10 years’ time, we can auction for 4G, and everybody will win once again. In 50 years time, when Laos launches its space program, we will have figured out how to fix the electrical blackouts at Don Mueang Airport.

Greed may be good. But the combination of greed plus incompetence may not be so good, understatement of the year. Gordon Gecko would agree.

But we shouldn’t be so cynical.

A call for sustainable recovery effort in Asia-Pacific