Where the elephants roam, family means everything
Opinion

Where the elephants roam, family means everything

In my work with elephants, I've seen some remarkable things, both in Thailand and around the world. One case in particular though stands out for me - that of Tina. 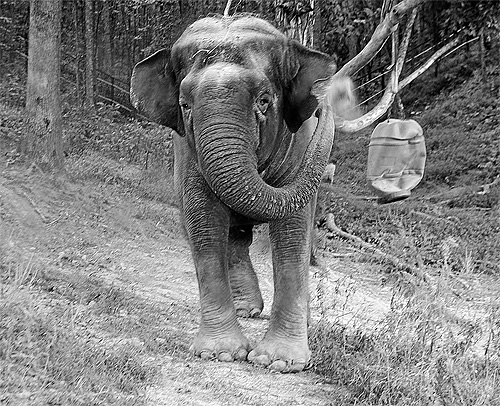 Tina, born and raised in captivity, enjoyed a brief period of relative freedom with fellow survivors of captivity at the elephant sanctuary.

When I first met Tina, she was serving a life sentence in solitary confinement at the Greater Vancouver Zoo. Born in captivity, the 33-year-old elephant had spent much of her life alone in a cramped, barren pen.

As the co-founder of The Elephant Sanctuary, the largest natural-habitat refuge for captive elephants in the US, I can assure you that elephants desire companionship and freedom just as much as you and I do.

For elephants, family is everything. Births are joyous celebrations, and deaths are mourned. Adults share news and offer support, while youngsters play together under watchful eyes. Female elephants stay at their mothers' sides their entire lives.

Tina was born in a captive-breeding programme. As a mere toddler, she was torn away from her mother and sold to a zoo. By the time I met her, captivity had taken a heavy toll. Lack of exercise, improper diet and years of standing on unnaturally hard surfaces caused her to develop debilitating arthritis and osteomyelitis, a terminal foot disease.

Thankfully, the zoo staff realised that Tina deserved a better life and rallied to have her retired to The Elephant Sanctuary in August 2003. Adopted into a family of six sisters, including Winkie from Myanmar and Sissy from Sri Lanka, Tina finally had a herd to call her own.

Elephants have a remarkable capacity to create new families with fellow survivors of captivity.

Playful Tarra became one of Tina's favourite companions. Sissy, who carried a tyre around with her as if it were a security blanket, routinely spent time with Tina, especially at night, when she and Winkie returned to the barn. Winkie, who suffers from post-traumatic stress disorder, often hung out with Tina under her favourite oak tree.

Tina's magnetic personality captivated her sanctuary caretakers, all of whom developed a deep bond with her. We watched with pleasure as she manoeuvred her way into the woods, swatted at butterflies and played enthusiastically with the plastic 44-gallon drum suspended from an oak tree.

She trumpeted incessantly, and we often found ourselves singing along when she broke into song.

We worked hard to heal her feet, watching over her with caution and guarded optimism. Her positive attitude and strong will to survive were an inspiration to us all.

Tina soon became the darling of the late-night "ele-cam", our live-streaming video. Fans tuned in to watch as Tina savoured her dinner while receiving her nightly foot care. Everyone shared in her excitement when, following foot soaks, her enrichment toy was filled with her favourite treat; purple grapes.

Then, in mid-July of 2004, we watched as Tina's condition worsened. Her osteomyelitis became critical, and managing her pain became challenging. One week later, on July 21, I watched as Tina slowly laid down on the barn floor for the first time since her arrival. I knew what this meant. I begged her to stay, but she just looked at me in her tender Tina way, and I knew her decision had been made.

She closed her eyes and passed away peacefully, surrounded by her adopted family of humans and elephants.

Our sorrow covered the sanctuary like a heavy cloud. The suddenness of Tina's death filled us with inconsolable grief and unanswered questions. Later, a necropsy would show that a heart problem, possibly a genetic defect, caused her death.

But we could not escape knowing that two decades of osteomyelitis had caused her a lifetime of pain.

As we humans busied ourselves with the details of laying Tina to rest, her herd-mates held a vigil over her body. Tarra was the first to come in from the habitat to visit Tina. Sissy and Winkie, who had been her closest companions, spent the entire night and next day standing quietly over their departed friend.

Visibly distraught, Winkie pushed and prodded Tina as if trying to get her to wake up.

As Tina was being buried, Winkie and Tarra stood at the edge of the grave, unwilling to allow the bulldozer to cover Tina's body with dirt.

Their grief was heartbreaking. Tarra kept grabbing my hand and guiding me towards Tina in a gesture to "go get her". All three girls spent the evening and the next day at the grave. Before they left, Sissy gently placed her beloved tyre on top of Tina's grave like a wreath.

Tina embodied love and compassion, and I feel blessed to have known and loved her. Watching her experience the joys of freedom and friendship was a wonder to behold.

I remember the first time she left the barn and entered the world of trees and vegetation. Using her sore feet like shovels, she gleefully flung mounds of dirt onto her back. She spent hours in the shade of the forest canopy, immersed in nature and savouring her new home. Later, in the barn, she emanated tranquility. As she munched on fresh-cut bamboo stalks, she appeared to be miles away, almost as if she were in a dream.

Like Tina, Mali - the Manila Zoo's lonely elephant - deserves to know freedom and family. Mali has been in solitary confinement for far too long. Nothing would make Mali happier than spending the remaining 30-plus years of her life as part of a herd.

Mali does have a second chance at life: President Benigno Aquino III has issued a directive stating that Mali's health should be evaluated and that she should be considered for transfer.

People for the Ethical Treatment of Animals (Peta) has offered to bear all associated costs and the burden of moving Mali to a sanctuary in Northern Thailand which specialises in rehabilitating Asian elephants.

The sanctuary can offer Mali everything that the Manila Zoo can't: Acres of land in which to roam, the care of experts and, most importantly, friends to call her own.

Carol Buckley is the founder, president and chief executive officer of Elephant Aid International. She rescues and rehabilitates needy elephants worldwide and provides them with hands-on care and compassion-based training.