Deadlines, threats against migrants bad for both sides
Opinion

Deadlines, threats against migrants bad for both sides

For two decades now, piecemeal cabinet resolutions have allowed migrants from Cambodia, Laos and Myanmar to legally register to work in Thailand, reflecting tensions between national security and economic necessity. 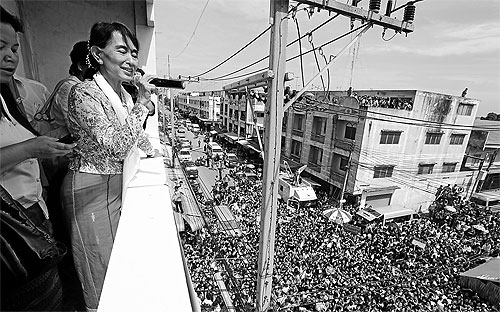 Aung San Suu Kyi speaks to Myanmar migrant workers in the fishing town of Mahachai in Samut Sakhon during her visit to Thailand earlier this year. PAWAT LAOPAISARNTAKSIN

But even after they register, a workers' immigration status has remained "illegal", and they remain under threat of deportation because of their irregular entry. Extensive restrictions on migrant's freedom of movement have applied, and many rights have been denied.

In 2001, 2004, 2009 and 2011, registration programmes provided undocumented workers in Thailand with opportunities to register.

Almost 2 million migrants were registered by 2011.

But within a year of each registration period, work permit renewals plummeted. Many migrants changed work and employers which, unless they go through a complex set of regulations, meant becoming irregular, or having no permit authorising them to stay in Thailand.

Discussions with neighbouring countries led to the signing of MoUs (memoranda of understanding) on employment cooperation between Thailand and Cambodia, Laos and Myanmar in 2002-2003.

NV allowed registered workers who were in Thailand "illegally" to acquire legalised status by means of official documents issued by their origin countries.

The MoU import process was a recruitment channel which enabled workers to enter Thailand through legal channels from neighbouring countries to meet specific skills shortages and employer demands.

Since 2009, increased efforts by Thailand and its neighbouring countries, particularly Myanmar, to make regularisation processes more effective have been visible.

Regularisation processes have increased both the confidence of migrants and their access to rights.

However, challenges in regularisation continue to include the bureaucratic nature of the processes; lack of transparent information about processes and rights; high costs for employers and migrants from unregulated brokers; lack of linkage of NV to civil registration in countries of origin; and lack of genuine rights protection and enforcement following regularisation.

Despite a growing presence of dependents, particularly children, of migrants in Thailand, only adult workers have been eligible for regularisation. And despite some promising signs, the issue of migrant children and their lack of access to healthcare, education and clear legal status has not yet been properly addressed.

Over the past two decades, Thailand has not developed a holistic migration policy from a long-term economic, social and human rights perspective, despite overseas workers making up an estimated 5-10% of its ageing society and workforce. A commitment to such policy development was a crucial pledge to the international community during Thailand's 2011 Universal Periodic Review in Geneva.

Rather, multiple administrations continue to prioritise narrow economic concerns and a need for cheap low-skilled labour in intensive export industries over human and national security and strengthening of the rule of law.

Migrants in Thailand have not been viewed as a valuable human resource whose skills should be enhanced for their origin country and Thailand's more productive future. Instead they have been viewed as a raw commodity.

Recently there has been increased pressure on Thailand to more effectively address migration management challenges. This pressure has stemmed from the increasing realisation of the extensive nature of migrant rights abuses in the country linked to human trafficking.

Thailand is one of the key source, transit and destination countries of trafficked persons for labour and sexual exploitation in the region.

Most observers consider Thailand's continued response to these challenges to be inadequate, and unless radical changes are seen, the US has threatened to rank Thailand as Tier 3 _ the lowest rating _ for trafficking in persons in July next year, then followed by future political, trade and economic sanctions.

As a result of these pressures, Thailand has recently more widely acknowledged the need for migrants, particularly from Myanmar. A grudging but gradual acceptance has shown that this need is not temporary, and that measures to more effectively address long-term migration are now required.

The government has also appeared more committed to regularising migration from neighbouring countries.

Recent political and economic reform in Myanmar has also led to concern in Thailand as to the future availability of migrant workers and the impact this may have on the economy.

But in sharp contrast, Thailand has recently made increasingly public threats to deport an estimated 1 million or more irregular migrant workers after this Friday, the current deadline for the existing NV regularisation process and only four days before International Migrant's Day.

Implemented against a backdrop of systematic disrespect for the rule of law by many law enforcement and migration officials, the plan will surely become abusive.

Once again Thailand's inadequate migration management processes, inadequate long-term migration policies and violation of the rights of migrant workers will be made blatantly clear.

Myanmar is aware of the impending chaos and President Thein Sein sent a delegation to Thailand late last month to request cooperation.

Thailand's response was blunt _ no extensions, no compromises, and it was up to Myanmar to address these challenges at its own expenses by setting up deported worker receiving centres.

Myanmar's labour minister will soon arrive in Thailand to continue the debate.

While not denying the responsibility of neighbouring countries for its citizens working in Thailand, senior Thai policy-makers continue to fail to realise, or refuse to acknowledge publicly, the reliance of their economy on low-skilled migrant workers. Benefits and burdens lay on both sides of the border.

The deportation threat also just doesn't make sense for Thailand. Employers protest about labour shortages and fears of workers returning home, while the government is threatening to deport workers in their thousands.

The international community is concerned about human rights violations and trafficking, but the government is intent to deport workers into situations that increase risks of trafficking or debt bondage.

There are strong negative forces undermining those within Thailand's government who are genuinely committed to addressing migration and trafficking challenges. Every time the government imposes a deadline on migrant registration, publicised crackdowns take place. Thousands of migrants are arrested, allegedly extorted and released (or if they have no money, deported).

So Thailand should instead take the opportunities presented by this important Friday deadline not to deport workers, but to actually work more closely with all stakeholders _ including UN agencies, the diplomatic community and most importantly neighbouring countries _ to strengthen migration management systems and ensure respect for the human rights of migrants and the rule of law.

There are many possible strategies and means for Thailand and neighbouring countries to address irregular migration in ways that respect national, economic and human security.

Importantly, there are seven existing Myanmar NV centres that, with cooperation already offered by Myanmar authorities, could register irregular workers and issue them with legal passports in cost-effective, safe and transparent ways.

Such centres could also issue certificates of identity to migrant dependents and children, allowing them to achieve legal status and gain access to education and healthcare.

Unrealistic deadlines and threats of mass deportation are unreasonable. These methods are overly-simplistic and will only lead to further violation of migrants' rights.

Hopefully in the coming days of negotiations, particularly between an increasingly active Myanmar government and the Thai government, positive forces of moderation will triumph and respect for the rule of law and human rights will increase.

Andy Hall is a foreign expert at Mahidol Migration Centre (MMC), Institute for Population and Social Research (IPSR), Mahidol University and can be contacted at andy.hal@mahidol.ac.th