Given a choice between a house and a car, what do you think most Thais who had never owned either would choose? Well, a car, of course. 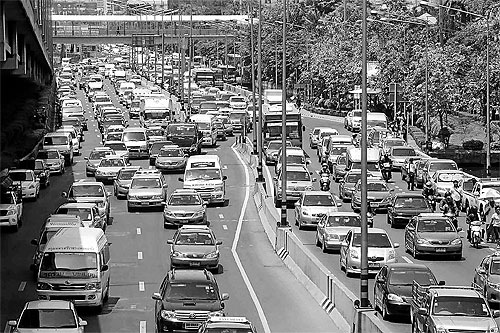 he first-car buyer policy has only added to Bangkok’s traffic problems to the point where people are reminded of the situation in the 1990s when motorists had to keep portable urinals in their cars.

That explains why the "car for the first-time buyer" policy under the Yingluck Shinawatra government has proven to be a resounding success. As of Dec 18, car sales under the programme had already topped 910,000 units with the tax rebate amounting to 63,000 million baht.

When the programme expires at the end of the year, more than a million cars will have been sold to first-time buyers, more than double the original target of 500,000 units. The tax revenue that the country will never receive because it will be rebated is expected to far exceed 70,000 million baht.

Compare that to the government's "home for the first-time buyer" programme. As of Nov 10, only 6,000 million baht worth of loans had been approved. It was estimated that by the end of the year the amount of loans approved would reach 10,000 million baht, just half of the targeted amount.

It is obvious that in formulating the policy the Pheu Thai Party had young urban middle-class and lower middle-class voters in mind. These are not the party's traditional supporters and many of them live and work in Bangkok.

So, winning them over will be crucial to the party's future political campaigns, particularly when the Bangkok governor election rolls around next year.

It's true the programme makes many people happy _ the car sellers, the buyers, the oil companies, the car accessory dealers, etc. But as a government policy, it is _ how shall I put it _ just awful.

Ms Yingluck and her advisory team _ or should I say her brother _ either have no idea of what makes a good policy or just don't care whether it is consistent with and supportive of other policies and the direction that a country should take.

Sure, the economy gets a boost and a number of jobs have probably been created. However, shouldn't the government encourage saving and prudent spending, particularly among lower-income people, rather than facilitating the creation of debt?

The National Economic and Social Development Board recently reported that national household debt in the third quarter of this year increased by 20.4% over last year with outstanding personal loans valued at 2.74 trillion (million million) baht. The agency said this is partly a direct result of the first-car-buyer programme.

At the same time, consumers' ability to repay their debts has decreased as evidenced by a surge in non-performing consumer loans of more than 25%.

Some economists have already predicted that we will see, as early as next year, an increase in defaults on car loans as many buyers find it hard to carry the burden of maintaining a car. This is quite obvious considering that some buyers, when deciding on purchasing a car, do not take into account other necessary expenditures associated with owning a car including fuel, insurance and maintenance.

The situation will be complicated by the requirement prohibiting buyers from relinquishing their car ownership for five years. If they can't pay off their car loans, it is still not clear how the situation would be resolved.

That's still to come. But what is happening now is traffic congestion in Bangkok has been exacerbated to the point where people are reminded of the situation in the 1990s when motorists had to keep portable urinals in their cars.

Bangkok's roads have a total capacity to handle some 1.6 million cars while the city had around 6.8 million cars as of last year. For the first 10 months of this year, almost 300,000 more cars with red plates were rolled out to ply the city's roads.

With so many cars sitting in traffic, a huge quantity of carbon dioxide will be pumped into the atmosphere to help warm the earth even further.

It's a shame that while governments all over the world try to lower energy consumption and ensure energy efficiency to help mitigate the effects of climate change, the Yingluck government has chosen to go the other way for the sake of political expediency.

And it is bewildering if not downright laughable that the cabinet this week decided to adjust the excise tax rates on cars based on the quantity of carbon dioxide emissions. The action is reportedly taken "to be in line with the government's renewable energy development plan with due consideration to efficient and environmentally-friendly usage of energy".

Now it is too late to reverse the damage. However, it is worth noting still that the revenue lost in the programme could have been put to much better use to promote public transportation.

It's enough to build another Suvarnabhumi airport or a high-speed train system for the country.

Cars may be regarded as personal status symbols but they can no longer represent a symbol of national development. Enrique Penalosa, former mayor of Bogota, Colombia, had it exactly right when he said:

"A developed country is not a place where the poor have cars. It's where the rich use public transportation."