A society in decay
Opinion

A society in decay

The greatest threat to Thailand is not from any foreign power. It is not the man in Dubai, nor is it the invisible hand. It is not the polarisation caused by the political divide, nor is it even the corruption.

The greatest threat to Thailand is our own weak character - the root cause of the failings of the political, learning, religious and family institutions. 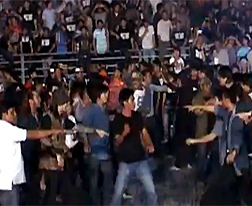 This past Monday night two rival groups – vocational school students versus Klong Toey teens – clashed at a concert, a charity show no less. The band on the stage played the Royal Anthem in order to calm the kids down. It didn’t work. It hasn’t worked for six years.

It took 700 police to subdue about 50 rioters, four people were hurt, two of them sustained tear gas injuries. This is just one example of the frequent, ongoing and escalating violence among Thai youth.

Show me a sack of rice sitting idly at a government warehouse and I’ll show you an adult who laments about today’s young generation – violent and clueless, materialistic and careless, superficial and conniving, etcetera, etcetera and etcetera.

How do we solve the problem? What is the solution? Who can the young generation look up to? Who can lead by example? Could it be the religious institution?

But just on that same night, an intoxicated monk stole a public bus and went on a joy ride. He even took methamphetamine pills, supplied to him by a young monk, no less. Shall we dismiss this as an anomaly?

Perhaps, but surely we cannot dismiss the bruised and battered image of the religious institution where reports of sex scandals and drunken parties are all too familiar. Not least of which, monks who give blessing at political rallies, ride in fancy European luxury cars and sport the latest techno gadgets, etcetera, etcetera and etcetera.

Cessation of desires? Cessation of the material world? Clearly not. A few bad apples in a bag of otherwise ripe  fruit? Perhaps, but enough to cause much damage to the religious soul of a nation.

No, the religious institution isn’t where the misguided young can look to. It may be a place where parents send their "child with a homosexual tendency" in order to extinguish such tendency. But instead, the child is filmed displaying such "homosexual tendency" in a saffron robe and posted on Youtube. It’s a crazy world we live in.

What else is there? Who else can save the young? Why not leaders of the nation? Those men and women we democratically elected to lead us.

But just last week, Thailand’s number two national leader, the deputy prime minister in charge of national security, was caught drunk while in Malaysia on a trip to discuss the southern unrest. Hewho  was also caught drunk during a meeting of parliament last year. He who while in that drunken state told a Democrat MP that he loves her during said parliamentary session.

If I didn’t know any better, I'd think the appointment of the deputy prime minister, my favourite politician, is the man in Dubai taking cold-hearted revenge on Thailand - brilliant and sinister this vengeance is. Is this one example merely an exception to the norm? I think not.

Wasn’t it also last year when groups of Democrat and Pheu Thai MPs bitch-slapped each other during another parliamentary session? With the Democrats rushing at the House speaker and trying to put a gangster beat down on him? Why, those kids at the concert were just emulating the actions of those we elected to represent society.

In fact, come to think of it, they do represent society quite fittingly, don’t they -- the anger, the violence, the corruption, etcetera, etcetera and etcetera? Surely, society cannot stand for this. Certainly, we the people must take the reins and the lead in order to save our children from a future so frightful and hopeless.

But then again, isn’t it that same society, we the people, who for the past six years have burned and rioted, seized and stormed, etcetera, etcetera and etcetera,  simply because we love or hate one man?

Help me here, I’m running out of ideas. When I was young, I remember at school we were taught to look up to soldiers and policemen as they… well okay, that’s not going to work either.

Yesterday was Teachers’ Day and… okay, not that either.

The horror that awaits us in the future is less of the political divide, but much more of the moral, spiritual and intellectual decay of a society. It is our institutions – political, educational, religious and family – that are eroding in character and values.

This is not a mourning of better days past, who is to say if the past was any better. The more correct perspective is that today is but an accumulation of mistake after mistake, neglect after neglect and apathy after apathy over the years and decades – the weakness in our character, self-deluded and clueless, selfish and careless and self-indulgent and callous.

Things seem worse today than before simply because the total sum of today is greater than that of yesterday. The greatest threat to Thailand is our own weak character. There are 65 million people who could save us.

But do they even realise that we need saving?