The name "Makkasan" evokes different images. A train and airport link station, a swamp, a junkyard for old trains, a wooded area in the heart of Bangkok that was apparently once dense enough to hide a cougar. 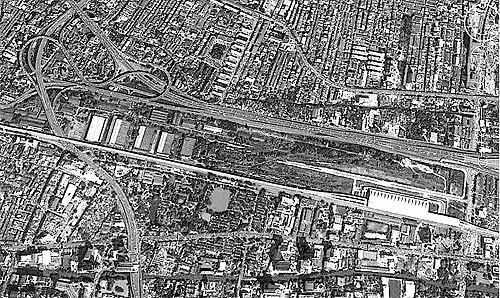 An aerial view of the old train junkyard in Makkasan. This vast area has the potential to be made into a public park. Photo courtesy of the ASSOCIATION OF SIAMESE ARCHITECTS

Wouldn't it be wonderful if the 400 rai of land owned by the State Railway of Thailand (SRT) could be turned into a leafy public park with well-planned commercial development?

Members of the Big Trees Group, including myself, have been following several attempts by the SRT to develop this vast, virtually abandoned area. Until a few months ago, what we had learned had not exactly been encouraging. Some sources said a politician's son would be put in charge. Others said the land would become yet another huge shopping complex, convention centre, hotel and office complex, without any green space.

Some academics estimated that, given the current and pending building projects, Bangkok will not need any more office space for a very long time. And we can all agree the city certainly does not need any more shopping malls.

Meanwhile, we have seen growing interest in Makkasan among Bangkok people, especially in the social media world since the "A Day Bike Fest 2012" event at Makkasan train station. If you went to the festival, you would have seen the vast verdant space surrounding the station. Huge trees are everywhere.

A Facebook page calling for Makkasan to be turned into a public park has cited examples of urban green spaces around the world such as New York's Central Park and London's Green Park. Questions are being raised online, such as how do we get the SRT to recognise the benefits of green spaces, not only for city residents' quality of life, but also for the commercial value of the Makkasan area?

One fine day, we had a chance to make our voice heard. A generous senior public figure arranged for Big Trees, along with a well-respected architect and notable academics, to meet SRT governor Prapas Chongsanguan.

During our discussion, we pointed out that the state railway could certainly proceed with its commercial development of Makkasan while maintaining up to half of the land as green open space. Given the size of the land area, the remaining part could be developed as commercial and retail space, whose value would be enhanced by the proximity of the green area which is already there naturally in the forms of large trees, swamps and a lake. We pointed out how residential and retail spaces around New York's Central Park are among the world's most expensive.

Another advantage for this property is its proximity to the rail system, and a sensible development could fully utilise the system and integrate it with other new transport systems.

Furthermore, the existing natural environment can serve as a water retention area and qualifies the property for a floor-area ratio bonus, according to Bangkok's new city planning regulations.

The lake in particular, if properly rehabilitated, can become a unique feature of this much anticipated new park at Makkasan, perhaps to rival the beauty of the lake at New York's Central Park or Paris's Jardin du Luxembourg.

Mr Prapas told us that he recognised the value of the green space at Makkasan and its importance to an urban environment such as Bangkok. On the current master plan for Makkasan, he thought that the idea of cutting up the land into individual plots for individual lessees comes with many disadvantages.

Also, this development would probably require over 100 billion baht; thus, a 30-year lease may not be financially viable.

He also said he hopes to revise the existing master plan to incorporate more open green space and to keep at least one of the area's award-winning, near-century-old buildings as a monument to the state railway's remarkable history.

Mr Prapas added that he hopes neutral academics and architectural organisations will play a role in future planning of this property. He is committed to ushering in a new era for the railway service, and Makkasan can become a landmark of this new era; a new model for urban development where commercial spaces are enhanced by their natural environment.

After the meeting, we left with a very positive impression of Mr Prapas, who comes across as someone who knows his job inside out and is ready to tackle new challenges.

If Makkasan can eventually become Bangkok's own world-class large green space, right in the middle of this bustling city, with abundant trees, a beautiful lake, jogging and cycling tracks, flanked by charming restaurants and boutiques, and residential and commercial spaces on the outer ring, Mr Prapas will deserve tremendous credit for making such a grand vision come true.

He will also become the hero of those Bangkokians who are desperately trying to preserve their health through the protection of the few remaining natural environments in this city.

He can achieve this by heeding the voices of Bangkok citizens willing to contribute as urban planners, environmentalists, designers and artists, so we can hand over a healthier Bangkok to our children and grandchildren.

Oraya Sutabutr is a member of Big Trees Group, a civic network campaigning for a greener Bangkok. The group can be contacted via bigtreesproject@gmail.com or www.facebook.com/BIGTreesProject.