Ever since Thai kings rode them into battle to defend the nation from invasion centuries ago, elephants have been an important symbol for Thailand _ a part of its culture, its economy and its pride. Now, as she plays host to a global summit on the illegal trade of endangered species, Prime Minister Yingluck Shinawatra has an opportunity to do something important for elephants _and for Thailand's international image. 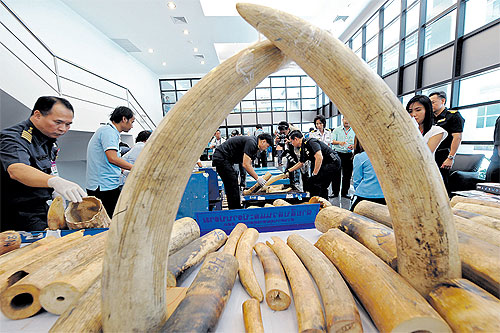 CRUEL CONTRABAND: Confiscated elephant tusks are displayed during a press conference at the customs office of Suvarnabhumi airport in Bangkok.

The stakes are high as delegates from 177 nations gather in Bangkok for a major meeting of Cites_the UN Convention on International Trade in Endangered Species. Intent on shedding its image as an international marketplace for the sale of exotic and endangered animal products, Thailand is rightly proud to be hosting this year's meeting. But that image will be hard to shed as long as Thailand remains second only to China as the largest destination in the world for illegally poached ivory.

Indeed, prior to this conference, calls were mounting for Cites to consider imposing sanctions on Thailand for what, rightly or wrongly, is perceived to be its key, albeit unintended, role in encouraging the slaughter of up to 30,000 elephants a year across Africa due to the escalating demand for ivory.

Thailand, of course, already has laws in place to protect endangered wildlife, as Prime Minister Yingluck noted on Wednesday, when she received a petition, signed by more than half a million concerned citizens, calling on Thailand to ban its domestic ivory trade. But while the sale of African ivory, as well as that from wild Asian elephants, is already banned, there's a giant loophole in the law that makes it all but unenforceable.

Because the sale of ivory obtained from domesticated elephants is legal in Thailand, smugglers are using the legal market to launder much of the ivory that criminal syndicates, heavily armed gangs and insurgent groups are now poaching in unprecedented quantities across Africa.

Thailand's status as an international transportation hub also makes it a mecca for criminal wildlife smuggling syndicates. Thai authorities have made a number of significant ivory seizures, but unfortunately what they've been able to confiscate represents only the tip of the trade. The roughly 1,500 domesticated male elephants registered in Thailand account for fewer than 100 pairs of tusks per year _ not nearly enough to fill the shelves of the more than 5,000 stores, boutiques and kiosks selling ivory products.

Clearly, regulation has not worked _ hence the growing calls from conservation activists around the world to censure Thailand for failing to live up to its Cites commitments. The concern underlying these calls goes deeper than just the love of nature or of animals, however.

The mechanised and heavily militarised scale at which poaching now occurs across Africa also poses a serious security crisis _ especially in the Congo Basin, where militias and insurgencies use the profits from their war on elephants to buy more arms and sustain conflicts that inflict grievous harm to the societies and economies of already fragile central African states.

The source countries being victimized by poaching cannot win this war alone. They need help from countries on the demand side of the crisis and they need it now.

It is for this reason that we call upon Prime Minster Shinawatra to ban the trade and sale of all ivory products in Thailand.

With the support of Avaaz.org we have seen a growing global chorus, now more than 1.2 million strong, demanding action from the Prime Minister.

Thailand needs to show the world that it takes this issue seriously and is committed to resolving it in favour of the iconic species with which its culture and history has been identified for centuries.

Doing so would earn Thailand the gratitude of all the member states of Cites and set a laudable precedent for other Asian demand-side countries to follow.