The 16th Conference of Parties of the Convention on International Trade in Endangered Species (Cites) has brought thousands of delegates from over 150 countries to Bangkok to discuss cross-border cooperation, sustainable use of biodiversity and transnational endangered species issues. 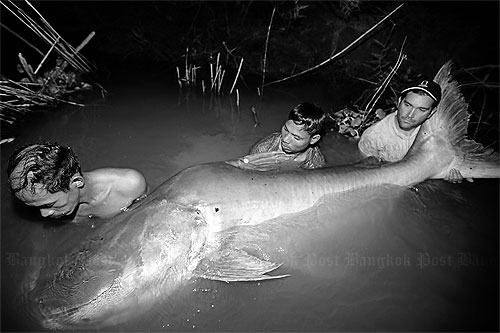 A critically endangered Mekong giant catfish in the Tonle Sap River in Cambodia. The world’s biggest freshwater fish faces the threat of extinction with the planned construction of a series of dams on the Mekong River. PHOTO COURTESY OF ZEB HOGAN

The importance of these issues is not lost on people living in the countries that share the Mekong _ namely Thailand, China, Myanmar, Laos, Cambodia and Vietnam _ grapple with similar topics as part of the ongoing debate about mainstream dams on the river.

Construction has already begun on the first mainstream dam on the lower Mekong, and without improved planning and cooperation between Mekong countries, mainstream dams will have serious transboundary environmental impacts.

The first of 11 dams planned for the mainstream of the lower Mekong River, the Xayaburi dam will likely have a negative impact on biodiversity, sediment and nutrient flow and fisheries production, undercutting the livelihoods of people living along the river in Thailand, Laos, Cambodia and Vietnam.

These two species _ both of which reportedly grow to nearly 3m long and weigh as much as 300kg _ are among the world's largest freshwater fish. They are particularly vulnerable to threats from the Xayaburi dam because of their large size, migratory behaviour, requirements for specific water quality and flow and complex life cycle dependent on the seasonal floods.

The official environmental impact report does not assess the dam's effects on these rare fish and many other migratory species. These oversights in the report could have disastrous implications for life in the river, including the extinction of iconic, globally significant species like the Mekong giant catfish.

While many studies suggest serious negative environmental impacts of dams on large rivers, detailed studies of the ways in which Mekong dams will effect migratory fish are lacking, which makes effective mitigation nearly impossible.

As the governments of Cambodia and Vietnam have already suggested, a new transboundary environmental impact assessment of the Xayaburi dam is necessary and must include rigorous research into the life cycles and migration patterns of Mekong fish, a topic which _ despite the importance of the Mekong's fisheries _ has largely been ignored.

Similar large-scale assessments have become common on rivers where dams have already been built and managers seek to rebuild damaged migratory fish stocks, but such assessments are urgently needed at the outset of projects to avoid unnecessary destruction of ecosystem services and costly restoration efforts.

For example, post-dam river restoration efforts in the US have cost an estimated US$1 billion (29.6 billion baht) a year for the past two decades, with little evidence of success.

The Mekong is one of the world's great rivers, flowing over 4,000km through six countries, producing an estimated two and one half million tonnes of fish each year. It is home to almost 1,000 species of freshwater fish, including several of the world's largest.

Just as Cites delegates now meet to openly discuss how cross-border cooperation can save Earth's imperiled species, we should encourage the countries currently discussing mainstream Mekong dams to do the same.

Zeb Hogan, an assistant research professor at the University of Nevada, is a National Geographic Society Fellow and the UN Convention on Migratory Species Councillor for Fish. He has worked on fisheries and endangered species issues in the Mekong River Basin since 1996.