Thailand must help its neighbours get over the dam fad
Opinion

Thailand must help its neighbours get over the dam fad

I was born and brought up in a hilltribe village at the foot of Doi Mae Salong in Chiang Rai. My mother was a teacher and social worker. My father was head of the hilltribe welfare unit. 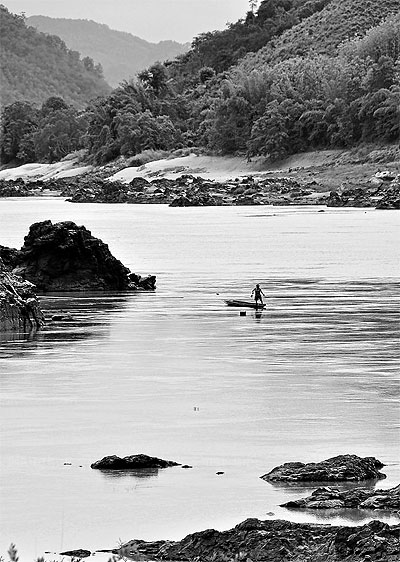 A fisherman near the site of the proposed Xayaburi dam in Paksey, northern Laos. The hydropowered dam will cause damage to local fisheries downstream of the Mekong River and adversely affect large numbers of people. PIANPORN DEETES

When I was about to study Grade 8, I followed my mother and her staff to visit fellow social workers in Thungyai Naresuan wildlife sanctuary.

To reach the sanctuary, we crossed the Srinakarind reservoir on motored raft and I saw a village of people who were relocated there because of dam construction. The place looked bleak, not as habitable as our village in Chiang Rai.

Once we arrived at our destination, we were briefed about the fight against the Nam Choan dam which would inundate the sanctuary.

I thought their work was cool and it would be good to have a job in such a beautiful forest. But there were times when I did not want to follow in my parents' footsteps given their struggles to secure funding for their projects.

In addition, their demanding jobs required them to travel extensively and stay far away from their family.

But as a freshman at Chiang Mai University, I enrolled in a course on Thai culture and society with Ajarn Nidhi Eoseewong whose teaching significantly broadened my perspectives, especially on the socio-economic gaps in social structures.

It then became clear to me why the poor become poorer while the natural resources are in the hands of the rich few.

When I started working with the Southeast Asia Rivers Network, the Pak Moon villagers from Ubon Ratchathani were protesting in front of Government House, calling for the opening of the dam's sluice gates to revive the river's ecology and fisherfolks' ways of life.

Later on, I had a chance to stay in Pak Moon village and learned about the river's ecological abundance and the villagers' rich knowledge about their river.

My first assignment was to work with villagers of the Salween Basin. The 2,800-kilometre Salween, which originates in the Himalayas, is a river of ethnic diversity as it passes through areas inhabited by at least 13 ethnic tribes such as the Lisu, Karen and Shan.

Long-standing political unrest in Myanmar had helped protect this river from dam developers. Now, there are plans to build several hydropowered dams on this river _ 13 in China and six in Myanmar as well as on the Thai-Myanmar border.

Our campaigns at that time focused on the Tha Sang dam in Shan state, the two dams on the border, and the Hatgyi dam in Karen state, a joint venture between Chinese investors and the Electricity Generating Authority of Thailand.

These projects were worked out without any agreements on water use. This has caused concerns over the impacts on the river ecology and human rights violations among ethnic peoples in Myanmar.

We also conduct campaigns to protect the Mekong River, the life-giving vein of more than 60 million people in China and four countries in the region _ Thailand, Laos, Cambodia and Vietnam.

At the beginning, our campaign focused on dams on the upper part of the river in China and the plan to turn the river into a water transport route to accommodate commercial ships from China to the Lao-Myanmar border, and the Thai-Lao border to Luang Prabang.

The plan, which involved extensive blasting of rapids and caused severe impacts on the river ecology, drew fierce opposition from local people who came together under the Chiang Khong Conservation Group.

Actually, the dams operating in China alone are more than enough to ruin the Mekong ecology. The dams' operations have changed the river flow, disrupting the migratory patterns of more than 100 kinds of fish in downstream areas.

The river that was once the main lifeline for generations of people is gone.

In an era when every country opens up to free trade and tries to boost trans-border investment, corporate giants in the region scramble to reap benefits from smaller, resource-rich countries like Laos, Cambodia and Myanmar.

As investors, with support from their governments, seek only to maximise profits, they pay little attention to the impacts on local villagers and river ecology. They seem to forget that environmental problems have no boundaries and they, too, cannot avoid the negative consequences of their own projects.

The past two decades have seen growing concerns over the impacts of dams. The World Commission on Dams has conducted studies on over 1,000 dams in 79 countries, and concluded that while the structures have their uses, they cause huge social and ecological damage.

There are more than 45,000 large-scale dams across the world.

More than 40-60 million people have had to leave their homes and become poor while damage to the environment cannot be reversed. Yet the benefits which are derived from dams are fewer than the developers tell us.

Dams have become an outdated technology. Yet other environmentally friendly options such as cost-effective energy and demand-side management are still being ignored.

Some of you must have heard of the Xayaburi dam project. The 1,260-megawatt dam, the first of the 12 dams to be built on the Lower Mekong River, is causing grave concerns for people in the Mekong River Basin.

Numerous studies indicate the dam, if built, will cause damage to the fish in the lower part of the Mekong, home of the world's biggest freshwater fisheries. The river is known for active fish migration _ in some active areas the movement is estimated at 30 tonnes per hour. No fish ladders could mitigate the negative impacts.

The 12 dams on the Mekong will deal a heavy blow to 2.1 million people and the environment. Yet they will be able to generate only 11% of the region's power demand.

Eager to join the transnational investment bandwagon, most investors do not hesitate to bribe local authorities while the villagers have no say on the projects that will ruin their livelihoods and the environment.

I hope Thais can show a "big heart", and help protect the natural resources of the region as if they were ours. Environment protection has no boundaries, after all.

Edited excerpts from Pianporn Deetes, who has been selected to deliver this year's Komol Keemthong Annual Speech to honour dedicated social workers. She is Thailand Campaign Coordinator with International Rivers.