The stellar growth in residential real estate last year was driven by strong demand. Thanks to favourable drivers including solid consumption, momentum from housing purchases after the great flood, tax incentives for first-time home buyers, and access to consumer credit, the real estate market has been upbeat. 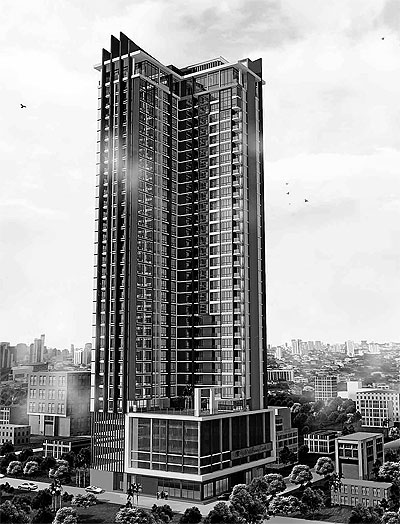 Bangkok-based developers are eyeing opportunities beyond the capital, as shown by this advert for an 800-unit condo to be built in Khon Kaen.

The residential real estate market size in Bangkok and its vicinity now surpasses 300 billion baht, or a compound growth rate of 10% a year over the past five years. Nonetheless, various Bangkok-based developers are eyeing opportunities beyond Bangkok, raising interesting points: why do Bangkok-based developers need to expand to the provinces and will they be successful in establishing their franchises?

The key to sustainable growth in the real estate market is balancing demand and supply. Should housing inventories rise to levels beyond the market's ability to absorb them, developers will find themselves in a cash flow trap _ a situation in which selling prices can collapse.

Market participants must therefore closely examine the absorption rate, which measures the portion of supply that has been bought in a given year. In situations where demand rises more strongly than the rise in supply, absorption will increase.

Such is the case for 2012. Absorption in Bangkok and its vicinity was at 45%, the highest in nine years, with the condominium segment leading the pack at 61%. Areas with stellar absorption include established residential areas such as Ratchada-Lad Phrao and Ramkhamhaeng, and in areas along mass transit train lines. Absorption rates are high in areas where there is both existing and pending train line construction.

Despite impressive results, real estate developers will need to overcome challenges related to buyers' affordability and cost pressures. While demand remains solid, there are doubts about how much consumers can afford per unit. Prices per unit already average around 3 million baht, a level where the average household in Bangkok earmarks about half of their monthly income towards mortgage payments.

Developers have been lowering unit sizes in an attempt to keep units affordable while also profitable, but units can only get so small before they cease to be attractive to buyers. In addition, rising land prices and construction costs put pressure on developers to control costs wisely.

To maintain their extraordinary growth trajectory, Bangkok-based developers are looking for new opportunities to complement their portfolios. The natural extension with seemingly low risk is obvious _ going beyond the Bangkok market, and into the provinces.

Attractive areas for real estate development are where the population base is large and wealth is sufficient. Among attractive regions are the northeastern part of the country which has historically been the poorest region in Thailand, but economic growth is beginning to pick up. More than a quarter of Thailand's population lives in the Northeast, giving the region the population base to support further development. Thanks to increasing crop prices and accumulating wealth from economic development over the years, the Northeast presents some interesting opportunities in the residential and commercial sectors. Efforts put forth by the Greater Mekong Subregion have helped interlink the economies of the Mekong region, thereby reducing the region's relative isolation.

Khon Kaen serves as a great case study of the rapid growth in the Northeast. Khon Kaen, the geographic hub of Isan, generates the highest GPP per capita in the northeastern region. Major institutions such as Khon Kaen University serve as a stimulus to regional migration into the city. Many factories have either opened or relocated to the Khon Kaen area, and consulates from China and Laos are also located there. In a classic sign of urban development, land bank in the city is becoming scarce, leading developers to look to high-rise projects. But while most signs are positive, speculators can also be active in the market, as some buyers are not locals and pre-sales take-up for a reputable Bangkok-based developer has been expeditious.

Nowhere is the local knowledge advantage more evident than in the way Bangkok developers have handled car parking issues at their Khon Kaen projects. More people in Khon Kaen tend to drive than in Bangkok. Despite this, some developers have supplied parking for under half of a project's units, a level similar to those found in Bangkok. While Bangkokians can rely on public transportation and may not need a space to park a car, parking is necessary in Khon Kaen.

Bangkok developers have also had issues with local regulations and customs. A notable example is the case of a developer that purchased land bank for a high-rise development in central Khon Kaen. The proposed project would have cast a shadow on a local religious site, and therefore sparked an outcry. In the end, the project had to be relocated to a different site away from the landmark.

Local consumers also tend to view Bangkok companies as out of their price range. This perception can hurt Bangkok-based developers who target the lower end of the market.

In the short to medium term, the northeastern region, and especially Khon Kaen, will see strong growth in the residential sector. In the long term, growth could come as a consequence of an increasingly integrated regional economy throughout Asean. Trade between Thailand and its neighbours has been growing quickly. Notably, cross-border trade between Thailand and Laos has grown at a compound growth rate of 22% a year over the past five years. Since border trade has gained in significance, certain choke-points will develop along the border as trade levels pick up. Projects such as the East-West corridor will serve to stimulate more trade throughout the Greater Mekong Subregion, thereby accelerating development which will lead to higher demand for real estate, among other products and services.

While long-term trends can be difficult to predict, it is clear that provincial markets will take on greater significance in real estate developers' portfolios. Bangkok developers are not exempt from the learning processes required to gain a deeper understanding of the provincial market. Once these firms get a stronger foothold in the market, the competition between developers will only become more intense.

The success of Bangkok developers in the provincial market is not fully guaranteed, however, so due diligence is necessary to ensure future projects are backed by sound fundamentals. Speculators would be wise to heed this advice, too.