Death of a child and the promise of peace
Opinion

Death of a child and the promise of peace

Nothing is better than an ice-cream on a hot summer afternoon. When you are nine, the summer ice-cream your mum bought for you when she took you to a fair or something similar attained beautiful meaning. 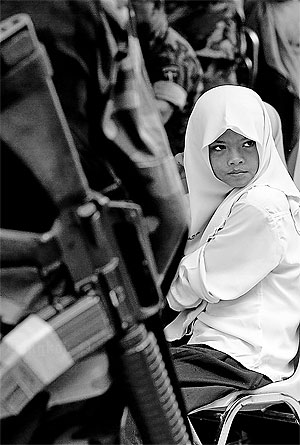 Aschoolgirl watches as soldiers inspect the remains of a school set on fire by insurgents. The southern violence has taken a heavy toll on children both in terms of casualties and trauma. The latest death was Nisofian Nisani, 9, who was killed when insurgents detonated a bomb at an ice cream shop in Pattani. Ongoing violence is posing a major challenge to peace talk efforts. AFP/ MADAREETOHLALA

Nisofian Nisani was in front of an ice-cream shop on Suwanmongkol Road in downtown Pattani when a 5kg bomb exploded and took away his young life on Thursday at 1.30pm.

Fourteen others, including the boy's mother, were also wounded in the attack.

Violence in the far South has claimed more than 5,000 lives and physically wounded more than 10,000 people in the past nine years, marking it as one of the most ferocious ongoing conflicts in the world.

The death of the young boy assumes special significance since this was the first time an attack on civilians had occurred since the signing of the General Consensus on Peace Dialogue Process in Kuala Lumpur last month.

The attack was also just a week before the follow-up peace talks meeting scheduled for this Thursday.

The death of this child points to what needs to be talked about in the coming peace dialogue between the National Security Council (NSC) and the separatist group Barisan Revolusi Nasional (BRN). This violence, and/or similar incidents that might happen in the near future will also serve as acid tests of the commitment towards achieving peace.

The appointment of Lt Gen Paradorn Pattanatabut, the secretary-general of the NSC, to sign the peace talks agreement on behalf of the government reflects for the first time a clear policy direction in pursuit of peace with insurgents.

This policy direction is a result of several factors which include ousted premier Thaksin Shinawatra's strong determination to do something about this problem, collaboration between the Thai and Malaysian governments, and perhaps most importantly, years of hard work by security officials _ military and civilian _ who have engaged with various insurgents in unofficial talks without a unified policy.

It goes without saying that those who go to the Kuala Lumpur table on Thursday will be there with different reasons and motivations. There might even be those who believe that in order to engage in "peace dialogue", all one needs is to exert strong pressure _ read coercion _ on the parties involved to make it work.

But I would argue that for a peace process such as this to work, there is a dire need to understand "peace dialogue" for what it is, what it can or cannot do, what then should be talked about, and finally what may be needed to sustain such a peace process.

A peace dialogue is not the same as peace negotiation.

The end-result of peace negotiation is usually a peace agreement (or a set thereof), while for peace dialogue it is simply the creation of an environment conducive to peace. The most crucial feature of such an environment is trust between the parties involved. That is perhaps the most difficult factor to cultivate.

If forced, a meeting can indeed take place, but without trust it would be unsustainable to continue those meetings in the long run.

It is important to understand that of the conflicts which came to an end in the past 20 years, 80.9% were through peace agreements.

Today, 40% of all armed conflicts are open to dialogue of some form, while about 60% need external mediation-facilitation.

It should not surprise anyone that among the most difficult to deal with are four protracted conflicts _ Palestine, which is now 96 years old (beginning with the Nov 2, 1917 Balfour declaration); Kashmir, 63 years old; Cyprus, 38 years old; and Western Sahara, 21.

These conflicts are protracted and therefore difficult to resolve, because beyond security of the states involved, the underlying issues are land, identity, sacred spaces, and self-governance.

Rattiya Salae, a professor of Malay language at Taksin University pointed out that the far South conflict is about Alif, Ba, Tha (letters in the Arabic alphabet). Alif is for Islam, Ba for Bangsa (the ethnic culture which includes language) and Tha for Tanah (land).

If this is the case, then the southern violence in Thailand could also be seen as a similarly protracted conflict which is difficult to deal with.

Peace dialogue is a part of the peace process which is a complex modality consisting of contacts, exploration, dialogue, negotiation and finally agreement(s).

Following this modality, the coming Kuala Lumpur meeting on Thursday could be more exploratory in nature. The question, then, is what should the meeting explore?

To enter into a peace process, especially in its exploratory stage, one cannot enter with any strict preconditions (i.e. If you don't do A or B, I will not talk to you). However, it is impossible to enter into a peace process and engage in peace dialogues without understanding its conditionality (i.e. that whatever is going to be talked about depends on existential conditions).

I would say that the most important issue now is the cessation of violence, and not about alternative forms of governance in the area.

In fact, in most cases alternative forms of governance are only discussed as a means of ending violence.

In this sense, alternative forms of governance become means of ending violence within the peace process.

Those who wish to explore this peace process need to talk about geography, time, weapons and targets.

Of the more than 1,600 villages in the three southernmost provinces, only some 200 have suffered from violence. In the spirit of exploration, a few villages, say three or six from these 200, could be selected as an experiment in "peace zones" where for a specified period of time, there will be no violence from both the insurgents and the government.

Since it would be unrealistic to assume the BRN and their colleagues could really control violence on the ground, there is also a need to discuss attacks by other insurgents outside the designated peace zones.

Perhaps the peace dialogue should also explore the possibility of inviting those who refuse to talk at this time to become pahlawan yang terhormat or "honour fighters" in other exploratory zones. Let me call these "honour zones", where the use of explosives are excluded, and civilian targets are considered outside the scope of violent attacks.

It should also be noted that there are at least 40 factors that could derail any peace process, such as internal divisions in an armed group, disagreement over issues on the agenda, distrust in the facilitator, or a rise in military activities among other things.

A peace process such as this one is no different. When violence continues, many will point their fingers at the peace process and conclude that it is futile.

A peace process such as this one will be fragile. Therefore it needs tremendous support from Thai society as well as a profound understanding from security agencies involved.

To mobilise both that support and understanding is both difficult and necessary, if such derailing factors are to be effectively mitigated.

And any time one doubts whether they are on the right path to ending violence in the far South, remember the death of Nisofian Nisani.

Chaiwat Satha-Anand is chairperson of the Strategic Nonviolence Commission, Thailand Research Fund, and a professor at Thammasat University's Faculty of Political Science.