The 10 Commandments of Songkran
Opinion

The 10 Commandments of Songkran

The three, er ... the five days ... the week-long Songkran holiday is religious, right? Didn't you just say, "Oh lord, thank you for a break from the workaday hot season!"? 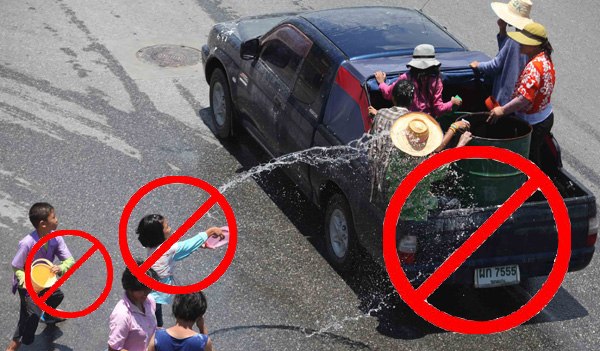 No. No. And No. No throwing at cars. No ice water. No dousing from the bed of the pickup. It's 2013 and we have rules about Songkran. (File photo by Somchai Poomlard)

If it's a religion, it follows that it needs rules, also known as commandments. As formulated by our betters, and for the good of all, here are this year's Ten Commandments of Songkran.

1) You shall not drink and drive. If you need an explanation of this one, you deserve the time that police promise that this year - really - you'll be locked up. We really mean it, no kidding, just wait and see if we don't enforce this.

2) You shall not drink and douse. Authorities have banned having a drink and then throwing water. They have also banned the sale of alcohol in areas designated for water throwing. Yes, really, there are now designated water-throwing areas. Wish the Songkran Police good luck with this one.

Most people, including most visitors, still think water-throwing areas are "anywhere inside the Thai border except for mom's kitchen".

3) Thou shalt not put ice in the throwing water. This is another new rule, and the highly regimented society of Thailand is certain to adopt and follow it scrupulously.

4) You shall not use high-pressure water guns. Because Thailand is like America in all ways and authorities have decided to have a gun debate, just like in the US.

The anti-gun side has decided "no high-capacity tanks on the guns" and no assault weapons. And exactly like in America, the definition of "high pressure water gun" is in the eye of the beholder.

The real meaning of this rule is if you douse a member of the elite Songkran Police force and he doesn't smile, your gun is illegal. Please note, however, that in view of the fact Songkran takes place in the hot season, your constitutional right will be protected to bare arms.

5) Thou shalt not do dirty dancing. The constitutional right to bare arms stops precisely at the acromion. Girls, keep your tops on. And anyway, what do you young people think this is, some kind of national party or something, where you can just bring massive disrespect to the nation with your new-fangled topless dancing hip-hop nonsense? And get off the lawn before we call the Culture Ministry!

6) Also, get off the pavements, you Bangkok vendor people. The law against selling anything - food, clothes, DVDs, water guns - will be rigidly enforced this weekend on the disciplined streets of Bangkok and its Songkran Enjoyment Zones. Anyone selling from the pavements during Songkran in Bangkok may be asked to donate to the Thetsakij Welfare Fund. 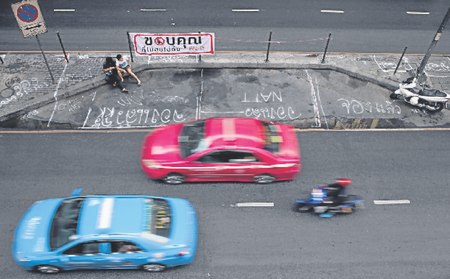 Two vendors sit on Silom Road's traffic island Friday after marking territories to set up stalls to sell goods as Songkran began. Police have said no vendors will be allowed, including in the median, so a confrontation is possible. (Photo by Patipat Janthong)

7) You shall not paint reluctant faces white. Translation: No flour ambushing. If you want to look like someone who is enjoying Songkran and put white stuff on your own face, go ahead. If you do it to others who are reluctant, the Flour Police will punish you by ... hmmm, how do you further punish someone covered in self-humiliating white flour? But anyway, just don't do it.

8) You shall remove all water tanks and pumps from the bed of the pickup before you go downtown to watch the water fights. "I forgot" will probably work as an excuse, though.

9) You shall remember that Songkran is a traditional and essential part of Thai culture, when tiny amounts of lustral water are poured on the hands of older family members as a sign of respect by the young generation, who seriously acknowledge the superior experience and knowledge of their elders. Ha ha ha, don't those old fogeys just wish this were true?

Didn't that old guy look surprised when I hit him with four shots to the kisser from the high-capacity back-tank of ice water in my new water gun?

10) Thou shalt not grope. Well, even unbridled, multi-day fun needs some code of conduct. Hands off the merchandise, guys! We're not kidding.