Publicity or propaganda, it's all just a matter of spin
Opinion

Publicity or propaganda, it's all just a matter of spin

When Beijing changed the name of the Department of Propaganda to the Publicity Department, journalists snickered at the transparency of the ploy, since the spin and the information control system remained the same. 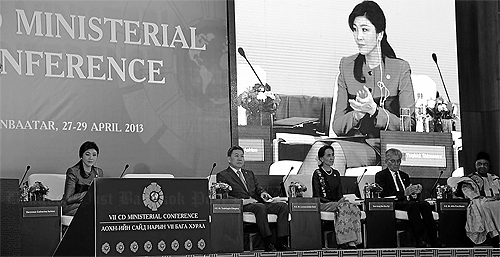 Prime Minister Yingluck Shinawatra speaks at the Ministerial Conference of the Community of Democracies in Ulan Bator, Mongolia, on Monday. Ms Yingluck condemned the 2006 coup, defended her brother Thaksin Shinawatra as a champion of democracy and blasted independent agencies for abusing their power. Photo courtesy of Government House.

But there's another side of the coin _ the paid "publicity" and "public relations" produced by multinational corporations, government speechmakers and even US academics can rightly be considered propaganda too.

Google CEO Eric Schmidt recently showed his corporation's penchant for propaganda, of which "Don't Be Evil" is empty slogan number one, in an article which slyly puts his company on the good side of the struggle against data mining and privacy invasion _ even though Google is a master exploiter of private information for commercial gain as well as a formidable data miner.

"We fight hard not just for our own privacy and security," Mr Schmidt said, with a touch of noblesse oblige, "but also for those who are not equipped to do so for themselves."

Harvard University professor Joseph Nye likes to brand himself a strategic thinker, but he's also a propagandist, hammering out one anodyne platitude after another, such as "all countries can gain from finding each other attractive", and "the best propaganda is not propaganda". This while hammering home his, and by extension, America's "ownership" of the word "soft power", even though it's not an original concept and in the US context is part and parcel of military strategy.

"When Foreign Policy first published my essay Soft Power in 1990," Mr Nye opines, "who would have expected that someday the term would be used by the likes of Hu Jintao or Vladimir Putin?" Clunk. Yeah, who would have thought? He even quotes a mention he gets in the Economist. Wow.

Nothing like a member of the Trilateral Commission tooting his own horn in service of liberal interventionism. "China and Russia make the mistake of thinking that government is the main instrument of soft power," Mr Nye says in a recent article for Foreign Policy. Yeah, unlike the US, which uses paid intelligence professionals such as Mr Nye, former chairman of the National Intelligence Council, to drum up support for US global dominion in the halls of academe, and in compliant beltway media such as sycophantic Foreign Policy, which just happened to name him a "top thinker".

Prime Minister Yingluck Shinawatra recently gave a speech on democracy in Mongolia that reflects some of the same spin and self-serving agenda as the examples above. Here are just a few of the classic techniques employed in her speech.

- Make frequent use of a key buzz word. Check. "Democracy" is mentioned 27 times in the Khao Sod transcript of Monday's speech. "Rule of law" is mentioned five times, mostly for rhetorical flourish it would seem, given that her fellow travellers in the red shirts are threatening the Constitution Court, and her brother is a fugitive of justice.

- Talk to one party with the intent to signal another. Check. The speech was delivered in Mongolia but it sounds like it was scripted for the US Senate floor: "No one should be left behind", "All men and women are created equal", "Of the people, for the people, by the people", "Due process", and "Active stakeholder". What better way to win regard from self-regarding Americans than to make generous use of US buzzwords?

- Talk about poor people to divert attention from your family's enormous wealth. Check. Yingluck is all for "reducing the income gap between 'rich and poor"' and providing "economic opportunities".

- Promote education as a cure-all. Check. "Education creates opportunities through knowledge" including the "knowledge to make informed choices". Good point, so why does her party tend to lose in the most educated electoral districts in Thailand?

- Use ready-made, boilerplate rhetoric to make it sound real. Check. "Thai means free", "A new era of democracy has arrived". The smoother sections of the speech seem to reflect the confident hand of speechwriter Suranand Vejjajiva, who used to write a column for this newspaper.

- Don't reveal your underlying motives. Uncheck. "Many who don't know me say 'Why complain? It is a normal process that governments come and go.' And if I and my family were the only ones suffering, I might just let it be." What has up until this point been a fairly well-crafted piece of rhetoric suddenly starts to sound like a replay from the days when Thaksin was prime minister, moaning and pouting whenever he didn't get his way.

The only sensible phrase in that plaintive complaint is "let it be", and here one suspects the gentle, corrective hand of former "Let it be" columnist Suranand.

- Cherry-pick history to serve partisan agenda. Check. Ms Yingluck talks of "international friends" and the need for "pressure from countries who value democracy" to keep "democratic forces in Thailand alive". But her "suffering" brother was famous for dismissing valid and constructive international criticism, most famously from the UN ("The UN is not my father!"), and also numerous NGOs and even the US, when he launched a bloody, quota-driven crackdown on drugs without reference to "rule of law" or "democracy".

- Invoke martyrs of past democratic struggles. Check. "Many people have sacrificed their blood and lives in order to protect and build a democracy." True enough, but what were the Shinawatras doing? Consider Mr Democracy's whereabouts at crucial junctures in the democratic struggle. Thaksin was a police cadet and then a student abroad working in a fast-food franchise while his age cohorts in the 1970s sacrificed their lives in the streets of Bangkok. In the run-up to Black May 1992, he was making a bundle off government concessions. Even during the red-shirt staged drama of April and May 2010, he was conspicuously absent, in Dubai watching events unfold in air-conditioned comfort, phone in hand, talking to minions long-distance.

Overall, Ms Yingluck's speech is a wobbly piece of propaganda, as such things go, inadvertently revealing when it gets personal but otherwise opaque and full of boilerplate platitudes. It makes mention of important issues. But her breezy, superficial treatment of these dead serious topics is more fitting for a partisan rally than a serious forum on democracy.

Philip J Cunningham is a media researcher covering Asian politics. He is the author of Tiananmen Moon.