How to live with irresponsible economics
Opinion

How to live with irresponsible economics

Winston Churchill famously declared: "Democracy is the worst form of government except for all those others that have been tried." 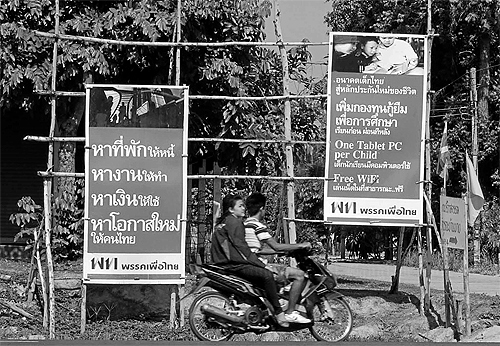 Campaign posters from the last election tell voters about Pheu Thai’s policy packages. The party’s second generation of populist policies, such as the rice-pledging scheme and tax rebates for first-time car buyers, is facing criticism for being fiscally irresponsible. THITI WANNAMONTHA

This is certainly true. My research shows that the Thai state has extended social welfare and offered social protection schemes to the people only in periods of democratic government.

For example, social security, unemployment insurance, universal healthcare and free basic education are all implemented during the tenures of elected governments. While I fully agree with Churchill, I can't help but think about the dilemma that democracy often faces: the tension between the rule of the majority and the creation of "common good", including economic growth and stability.

You may ask, what is the dilemma here?

Under the Thai political regime, politicians have the full freedom to propose any policy platforms they think will be "popular" and thus will help them win seats.

Some earlier populist policies, such as the 30-baht universal health coverage policy and microfinance schemes, revolutionised Thailand's public policy landscape. These policies benefited a vast number of poor people and improved their quality of life.

However, many of these policies did not come without high costs. The "second generation" populist policies, such as rice-pledging scheme and tax rebates for first-time car buyers, used large amounts of money but have failed to produce significant benefits.

Rather than being referred to as "populist" policies, they should be called "fiscally irresponsible" policies.

It is estimated that the government spent about 300 billion baht in 2012 on such policies, which were designed mainly to win elections but did not increase the capabilities of the Thai people.

In particular, the rice-pledging scheme, which probably costs about 100 billion baht a year, is vulnerable to corruption and threatens the rice market.

It is fair to say that voters were not informed of the prices and costs of such policies during the time of the ballot. This would be like shopping in the supermarket without knowing the actual price even after checking out, with the bill being sent later.

We vote without knowing how much certain policies will actually cost us. We put faith in our elected politicians to make decisions on our behalf, and we, as well as our future generations, will bear the cost in the long run.

This kind of political behaviour is certainly unhealthy as politicians are competing without being subject to any constraints on what they can promise and voters are not given all the information.

In this setting, politicians compete with a "lod-lak-jak-tam", or "discount-exchange-giveaway and buy-one-get-one-free" strategy.

This creates uncontrollable and irresponsible fiscal spending, which could result in a major debt burden in the future, unless the economy grows fast enough.

How, then, are we to live with these possible drawbacks of democracy?

First and foremost, some constraints should be put in place to ensure that the government is spending within responsible limits and does not create heavy burdens for future administrations.

In particular, the constitution should be revised to set a ceiling for the government's budget deficit and limit its ability to borrow. A budget constraint would help to minimise potential damages caused by the government's extravagant economic policies.

Currently, the government is mainly subjected to the fiscal sustainability framework, which is a mere guideline and has no binding power.

Other control mechanisms can be found in the debt ceiling, which is governed by the Public Debt Management Act.

However, the government can bypass this regulatory control by passing another legislative act, like the recent bill to allow the Ministry of Finance to borrow 2 trillion baht to invest in public infrastructure. This is possible as the current constitution does not ban such an undertaking.

The 2-trillion-baht loan bill is also an example of a law that raises many democratic legitimacy concerns.

The bill severely restricts parliament's power to oversee government spending as it cannot approve or reject a particular project which will be funded by the loan. This is because the project list is not a part of the bill.

This is particularly worrisome, as more than half of the projects have yet to complete feasibility studies.

Therefore, having an effective constitution, which mandates fiscal discipline and appropriate budgeting procedure, would prevent the passing of such laws in future and would be a necessary tool to tackle irresponsible competition among political parties.

In addition to amending the constitution, the government should expedite the issuance of the fiscal law, mandated by Chapter 167. The law would, among other things, require multi-year planning of government spending.

Apart from the aforementioned legal reform, a parliamentary budget office should be set up in order to assist the parliament to effectively review the government's budget, as well as providing useful information for the public.

Finally, academics should also join forces to estimate the fiscal burden of policies proposed by major political parties during the election campaigns.

This way, the public will have a much fuller picture of the costs, which they or their children will have to bear in the future.

Somkiat Tangkitvanich is president of the Thailand Development Research Institute (TDRI). Policy analyses from the TDRI appear in the Bangkok Post on alternate Wednesdays.