After a two-week protest, the red-shirt rally to oust the Constitution Court judges is set to come to an end following the intervention of the Pheu Thai Party's de facto leader. 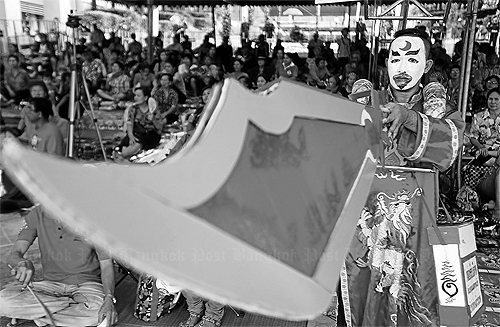 A demonstrator mocks Constitution Court judges during the red-shirt rally at the court. THITI WANNAMONTHA

The protest, led by the Radio Broadcasters for Democracy movement, had vowed to mobilise 100,000 supporters yesterday to pressure the judges to resign and to force the Budget Bureau into stopping payment of the judges' salaries.

The rally's main showdown was supposed to happen yesterday.

The protest had threatened to become a political timebomb, but was shrewdly defused by Thaksin Shinawatra.

At first, the Pheu Thai Party drew energy from the speech. They thought it was sharp and powerful. But the speech was met with a major backlash and Ms Yingluck suffered harsh criticism.

The negative public mood against Ms Yingluck _ and the realisation that the anti-Constitution Court rally would probably fall flat _ led to Thaksin's decision to finally call the rally off.

To ease political tensions, Thaksin has also increased pressure on his people to speed up parliamentary approval of the amnesty and reconciliation bills.

The amnesty bill sponsored by MP Worachai Hema will benefit rival protesters from both camps, but not their core leaders.

The reconciliation bill sponsored by Deputy Prime Minister Chalerm Yubamrung, meanwhile, will give everyone involved in the colour-coded political conflicts a blanket amnesty from 2006 onward.

Mr Abhisit and the leaders of the yellow-shirt People's Alliance for Democracy (PAD) fiercely oppose Mr Chalerm's bill. They are confident they can fight the court cases successfully and do not want to see Thaksin absolved of his crimes. This resistance from the other camps has made Thaksin realise a quick win is not an option.

Pheu Thai risks losing political legitimacy and public support if it continues to press ahead with the bills.

The amnesty bill has been moved up as a priority item for the next parliamentary session's agenda in July. The reconciliation bill has received Thaksin's blessing as his preferred bill. Yet both bills face several hurdles, and Thaksin knows that. For starters, the Democrats will certainly turn to the Constitution Court again to rule that both bills violate Section 309 of the charter. According to Section 309, the only group eligible for an amnesty is the coup makers.

Thaksin, however, wants the amnesty to also apply to cases prior to the coup, which include several criminal cases against him. This apparent move to absolve himself has triggered widespread resistance.

It is understandable then that Thaksin thinks it is wiser to temporarily stop his party from pressuring the Constitution Court. He knows the timing is not right.

Thaksin also realises there many other fronts in this war.

Other headaches include problems such as the strong baht and legal blunders in the 3.5-billion-baht water management bill and 2-trillion-baht infrastructure borrowing bill.

Legal complaints against the water bill have been filed with the National Anti-Corruption Commission. The opposition has also filed a complaint with the Constitution Court that the 2-trillion-baht borrowing bill violates the budget law.

The government is overwhelmed by Constitution Court cases and it is getting harder for the prime minister to smile amid the verbal attacks against her.

Thaksin has reportedly expressed sympathy for his sister for following through on his missions. He's now wondering just how long she can withstand the political heat.