There has been much controversy surrounding the recent appearance of a contestant who appeared to have special needs on the Channel 3 show Thailand's Got Talent. 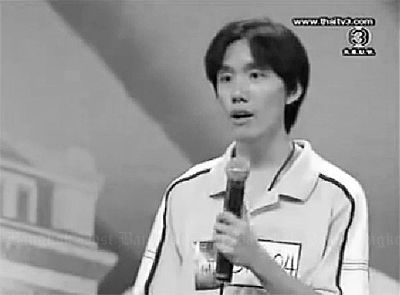 Emerald appears on Channel 3’s ‘Thailand’s Got Talent’ last weekend. The show has come under fire for its treatment of the 24-year-old contestant.

The incident reflects not only bad taste and poor ethical judgment on the part of the show's producers, but also a critical lack of understanding in Thai society of people with special needs.

According to official figures, about 3% of Thais, or 1.8 million people, are registered as having a physical or mental disability. There are also a further 1 million who are not registered. With that in mind, it is of vital importance that society, and especially the mass media, is educated about and considerate towards this special group of people.

I am writing this piece wearing two hats: the first as an academic in the field of media and communications, and the second as the mother of an autistic child.

Not surprisingly, I am passionate about the issue. And yes, I was flabbergasted to witness the dehumanising episode of the prime-time show broadcast on national television on Sunday evening.

As a mother to an autistic teenage son and having been around the autism community in Thailand, I recognised almost immediately traits from the autism spectrum being exhibited by the unfortunate young man on the show, who has since become known to the public as "Emerald". His lack of eye contact and monotonous speaking pattern, his lack of social skills, bluntness of speech and self-absorption, were all indicative of the condition.

Of course, it would be wrong of me to label Emerald as having a medical condition not mentioned by either himself or his family. So I will clarify that these are merely my personal observations, based on years of first-hand contact with an autistic person. I could well be wrong.

That said, whether or not Emerald has autism is almost secondary to the key issue, which regards how he was mistreated and ridiculed on the show by both the commentators and studio audience. And most importantly, the way the programme seemed to capitalise on his differences and disadvantages to increase their viewing figures.

But why was he ridiculed? It is because he is different and doesn't behave in accordance with accepted social norms.

He didn't greet the commentators or say thank you when offered a bottle of water. When he was asked why he had behaved in such a way, he simply said, "My family does not emphasise manners but gives more importance to ethics".

For an "average" person, such a reply might seem inappropriate. But for someone who has spent a lot of time around people with development disorders, it was clearly understood as a sign of a social skills deficiency. It is one of the many symptoms that plague people with conditions in the autism spectrum.

Emerald said in his interview that he entered the talent show because he was inspired by the success of previous contestants, such as Susan Boyle in 2009 on the British version of the show and Gig Warunee, a woman from a modest background who shot to overnight fame in an earlier series of Thailand's Got Talent.

Nevertheless, it is supposed to be a talent show. And anyone watching the controversial episode must agree that Emerald is not a talented singer. The quality of his voice, his performance style and his body movements were both substandard and strange for a 24-year-old man. So, the question is why was he selected to appear in the first place?

Could it be that the show's producers thought his "odd" personality and candour would make for good comedy, albeit unknowingly on Emerald's part. In fact, the programme was widely criticised as being fake and scripted. Even the dramatisation acted out by the commentators and stage audience was questioned.

I must say that I found the statement issued by Workpoint, the show's production company, lame at best. It claimed that, "Emerald is a normal person but displayed eccentric behaviour due to his nervousness".

They are clearly still missing the point.

Whether or not "Emerald" has special needs, he is still a human being and deserves to be treated with dignity. Just because he differs from the accepted norm does not give people the right to jeer, boo and insult him the way they did last weekend.

Perhaps, the producers of the show ought to reiterate what Emerald said: "Manners second, ethics first."

Pirongrong Ramasoota teaches and researches on media, communication and society at the Faculty of Communication Arts, Chulalongkorn University.