The nation versus the tribe
Opinion

The nation versus the tribe

On the surface, we Thais may champion democratic ideals, the concepts of justice, human rights and rule of law. But when those ideals clash with the goals of the tribal family – as they often might – what then would we choose?

There are many fishy details over the disappearance and death of businessman Akeyuth Anchanbutr, but this is only to be expected given his track record.

He fled overseas to avoid being charged over a collapsed pyramid scheme in 1985, only to return to Thailand after the 20-year statue of limitations in the case expired. He was always surrounded by bodyguards as he had powerful enemies.

As a staunch opponent of Thaksin Shinawatra, he insulted Prime Minister Yingluck Shinawatra and women upcountry as a whole for what he claimed to be their low IQs and loose morals. 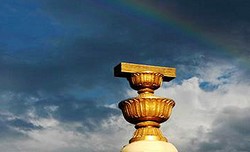 The man in charge of investigating the case is Metropolitan Police Bureau commissioner Khamronwit Thoopkrachang. Last year when he received his appointment to the job Pol Lt Gen Khamronwit flew to Hong Kong to meet Thaksin and personally thank him for the promotion.

On his office wall, he placed a framed photo of himself with Thaksin, with the caption ‘’I can have today because you gave it to me’’. He said he will always be loyal to Thaksin and if his loyalty, love and respect is wrong, then, as he told the country, ‘’fire me’’.

A man has his loyalty, love and respect and that is his prerogative. However, it begs the question: would this affect the investigation into the case of Mr Akeyuth?

For that matter, how would this affect the investigation of any case linked to politics? Would there be a conflict of interest? Where is the line between loyalty to a person and upholding the law? This is not an accusation against Pol Lt Gen Khamronwit. For all we know he perhaps can walk the line with his head held high. Rather, this is to question a cultural norm. 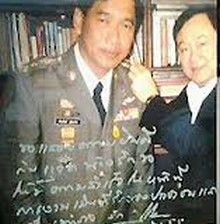 Individuals come and go, but cultural norms pass on from generation to generation as a hereditary blessing, or a curse. Here we examine a cultural system as a whole, a system underlined by tribal mentality, and how it clashes with democratic ideals.

On the one hand, we have the ideals of democracy – the rule of law, human rights and justice – the words in the constitution, the letters of the law and the concept of human rights.

On the other hand, we have the family or tribal unit, the patronage network. This is where everyone is a pi (older brother/sister) or a nong (young brother/sister), and there’s always the patriarch. The tribe is a cult of  personality. Love, respect and, above all, loyalty are the virtues of the tribe. Everyone unites to protect the tribal image through face saving efforts.

When on a case where preserving the rule of law clashes with tribal loyalty, how would a policeman conduct the investigation?

When presiding over a trial, where the pursuit of truth and justice is at odds with tribal loyalty, how would a judge pass a verdict?

When running a country, where good governance and national progress is at odds with tribal power, prosperity and image, what would politicians choose?

When a colour-coded faction commits acts against democratic values, would a member or supporter step beyond the tribal mentality to condemn, or close ranks and blindly defend the tribal colour?

The Akeyuth-Khamronwit-Thaksin quandary is but one tiny example of the conflicts of interest that invariably occur when democratic ideals clash with tribal loyalty.

The answers to the four questions above posed to the policeman, the judge, the politician and ordinary citizens will determine whether Thailand continues as a land of rival feudal tribes, or advances as a democratic nation.

One doesn’t have to exist without the other. Both can co-exist within a culture. The question is: which is the priority? Push comes to shove, which would we chose, the nation or the tribe?

Unfortunately, many would answer that their tribe is the rightful owner of the nation.