The Obama administration has often stated its commitment to open government - and justifiably so. We live in the age of online transparency and online democracy. Yet, the administration is keeping the contents of the Trans-Pacific Partnership (TPP) - the most significant international commercial agreement since the 1995 World Trade Organisation - as secretive as possible.

The deal has been under negotiation since 2008, and the administration is hoping negotiations can be concluded by the end of 2013. 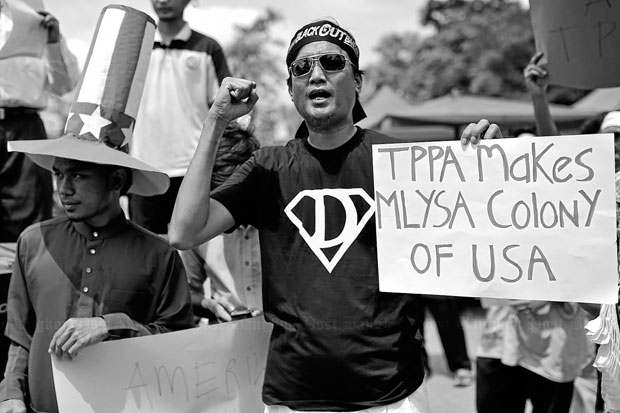 A demonstrator in Kuala Lumpur joins a protest against Malaysia's participation in rule-making negotiations for the Trans-Pacific Partnership agreement. The secrecy of the deal, which will have a far-reaching impact on people's lives, has stirred protests in partner countries. AFP

The 18th round of negotiations wrapped up last month in Kota Kinabalu, Malaysia. The TPP is a sweeping pact that would directly affect many of the core tenets on job security, food safety, financial stability, affordable medicines, internet freedom and democratic lawmaking.

Even the George W Bush administration, hardly a paragon of transparency, published online the negotiating text of the last similarly sweeping agreement, called the Free Trade Area of the Americas, in 2001.

For the TPP, the Obama administration's trade officials have even denied repeated requests from the US Congress to access the draft agreement text.

After congressional and public outcry against the remarkable secrecy, the administration is finally allowing limited access to a few congressional members. But it is still keeping the public in the dark and denying members of Congress the negotiation observer status they have enjoyed in the past. This is astounding, given that the US Constitution provides Congress exclusive authority over trade policy.

There is one important exception to this unprecedented wall of secrecy, however. A big-business-dominated group of more than 600 official US trade "advisors" enjoy privileged access to TPP texts and negotiators.

This disturbing combination of extraordinary secrecy towards the US legislative branch and the American public on the one hand, and chumminess with big business on the other hand, matters a great deal. Why? Because the TPP itself is such a big deal.

All signatory countries' national and local laws and policies in non-trade areas would be required to conform to the TPP's terms. Failure to do so would subject countries to trade sanctions. Several proposed chapters have leaked, providing evidence of how widely this pact extends far beyond traditional "trade" matters.

Only five of the TPP's 29 proposed chapters deal with traditional trade issues. Most chapters would reach very directly into peoples' lives. In the United States in January 2012, a passionate debate exploded over a legislation that would curtail internet freedom. Wikipedia, Google and a host of other major websites blacked out their sites to protest.

That legislation, the Stop Online Piracy Act (SOPA), suffered a fatal blow in the US. But now, the very corporations behind SOPA hope to reincarnate SOPA within the TPP framework. The sweeping copyright terms proposed for the deal threaten to turn our daily web browsing into a maze of censored messages.

Another leaked portion of the TPP text would take aim at policies to control medicine costs. Pharmaceutical companies are among the firms enjoying privileged access to TPP negotiators as official "advisers". They have long lobbied against government efforts to keep the cost of medicines down. Their goal is to keep their already unaffordably high profit margins up.

One leaked TPP text reveals terms that would allow pharmaceutical firms to challenge the measures that the US government uses domestically to negotiate lower medicine costs for Medicare, Medicaid and veterans' health programmes.

Given that ballooning health care costs are also the single largest contributor to long-term US budget deficits, this isn't just a vital pocketbook issue for vast numbers of Americans. It is why even those who care first and foremost about the US national debt should care about the TPP.

What about Wall Street's agenda in the TPP? The mission of big bank lobbyists is to water down the post-crisis regulatory efforts that aim at reining in the financial sector's excessive risk-taking.

The TPP would help their cause. While the International Monetary Fund has shifted position, now supporting the use of capital controls to mitigate and avoid financial crises, the TPP would ban the use of such policies.

The deal's proposed text on financial services is based on the very same deregulatory model that led to the global financial crisis. Incredibly, the TPP would also forbid bans on risky financial products - such as the toxic derivatives that led to the massive AIG bailout.

At the end of the day, one big question remains. If the changes that are now being stealthily hatched in TPP negotiations were being contemplated by Congress or a US federal agency, they would be subject to fierce public debate. How can those of us who would have to live with the TPP's results - the United States and other involved countries - be denied the details, much less a say?

Perhaps because if the text were made public, it would become clear that the deal now envisioned could not be signed. Indeed, that was the view of Ron Kirk, US President Barack Obama's top trade official until earlier this year.

Michael Froman, who recently replaced Mr Kirk, is now the public face of the administration's strategy and the apparent calculation that underlies it: when upending a vast body of consumer, environmental and worker protections for the sake of narrow corporate interests, it's better to work in the dark. Such extreme secrecy is bound to backfire.

The secrecy of the TPP process represents a massive assault on the principles and practice of democratic governance. That is untenable in the age of transparency, especially coming from an administration that is otherwise so quick to trumpet its commitment to open government.

Lori Wallach is director and Ben Beachy is research director of Public Citizen's Global Trade Watch. They are regular contributors to The Globalist.