It felt like deja vu for a while. As parliament reconvened, anti-government columns lined up, ready to rumble and depose the government of Prime Minister Yingluck Shinawatra, this time under a new rubric called the People's Democratic Force to Overthrow Thaksinism (Pefot). 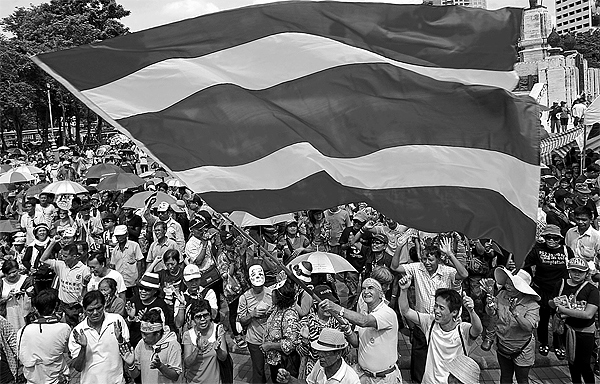 Anti-Thaksin Shinawatra protesters wave a Thai national flag during a demonstration at Lumpini Park. The protests failed to stop the parliamentary deliberation of the controversial amnesty bill believed to pave the way for the ousted premier to return to Thailand. EPA/RUNGROJ YONGRIT

Taking to the streets in parallel with the separate Democrat Party demonstration's supporters, Pefot's rise coincided with the relocation of Their Majesties from Siriraj Hospital to Klai Kangwon Palace in Hua Hin on the southern coast. The royal relocation was interpreted by anti-government groups as a sign of displeasure and an escape from harm's way, insinuating Their Majesties were not safe at hospital while this government is in power as protests loomed.

Rumours swirled and social media was abuzz last weekend that something big was about to take place in this land of regular intrigue. It did not.

And now Thai politics is back to the same grind between those accustomed to and supportive of the established monarchy-centred political order and others more inclined towards voter-centred outcomes in an electoral democracy. This round of street demonstrations and political brinkmanship will not be Thailand's last in its protracted endgame but parliamentary means and democratic mechanisms appear to be eclipsing extra-parliamentary coercion and manipulation.

The pretext this time was the ruling Pheu Thai Party's bid to pass an amnesty bill in parliament. Anti-government groups are fearful that any kind of amnesty would absolve former prime minister Thaksin Shinawatra, the real leader of Pheu Thai and Ms Yingluck's older brother. It is a logical assumption. Why would the ruling party under Thaksin's control propose an ambiguous amnesty that excludes its leader-in-exile?

The Yingluck government's handling of this round of anti-Thaksin demonstrations is mixed. Prime Minister Yingluck was deft and clever to call for a political reform council comprising top stakeholders and prominent figures. If she had been a lightning rod in combative fashion, as her brother would have been, political tensions would have soared.

But the government remained vague on the amnesty bill proposed by Worachai Hema, a Pheu Thai MP, thereby sowing distrust. The Worachai bill appears intended to cast the amnesty net to cover only the bit players, bystanders and others who were in the wrong place at the wrong time during the colour-coded protests of recent years.

Several dozen of these protesters, especially from the 2010 confrontation and violence, have been languishing in jail. It appears in wording to exclude all protest ringleaders and military commanders.

But the Worachai bill can be further clarified. It can specify the names of those who would be absolved of political crimes if it were to pass into law. The list could be limited and manageable.

This process of identifying who would be covered should still be undertaken during the deliberations of the Worachai bill. It would be a confidence-building measure and allay the fears of anti-Thaksin groups that the bill would be tweaked to cover the former premier.

Adding to the climate of distrust was the government's unwillingness to openly allow live television broadcasts of parliamentary deliberations. Alternative channels and radio outlets were available but Thai audiences are used to Channel 11 of the Public Relations Department when the Lower House debates important bills and censure motions.

And the police's pursuit of alleged Facebook incitements of violence and government overthrow was completely counterproductive. Anti-Thaksin people are haunted by the dominant role of the police during the Thaksin years, conjuring up images of a police state.

For the protesters, their turnout was disappointing due to a lack of a united front, unlike in 2006 when anti-Thaksin protests paved the way to a military coup and in 2008 when similar protests came up with judicial dissolution of Thaksin's then-ruling party and army manipulation that resulted in the Democrat Party's takeover of power.

This time, as with the Pitak Siam movement last year, the Pefot and Democrat Party demonstrations did not generate much traction. Even with much larger numbers than the few thousand who turned up, no elected government in Thailand would leave office unless its term expires, it resigns in disgrace, or the judiciary and/or military intervenes.

That street demonstrations have once again failed to unseat an elected government bodes well for Thailand.

The Yingluck government should be more open-minded and transparent to allay fears and promote trust. By not letting opponents pick a fight with her, Prime Minister Yingluck has the right temperament to handle Thailand's political temperature in its most contested patch in the months ahead.

Yet she must be more hands-on to foster a more conducive environment for reform and ways forward. The police should not become overconfident for having successfully managed anti-government crowds twice in two years.

As all eyes turn to the lower house, the Worachai bill should be clarified and specific during the vetting process in the next few months as to who will be covered. The Democrat Party may turn out to have lost the most in this round of demonstrations. It was unbecoming of an elected and main opposition party to openly resort to street politics in vain and yet enter parliament to delay and filibuster all government bills. Such moves will not bring it any closer to winning power at the polls. Many changes are overdue in Thailand, not least among them the Democrat Party's leadership.