Lying still in a chilled casket in his navy blue suit at a high-end hospital in Bangkok, Chin Peng's face looked smaller than he appeared when I first met him four years ago. 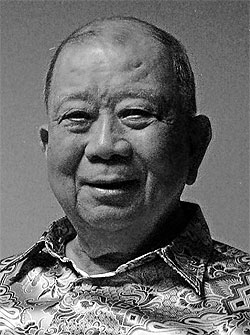 Former communist guerrilla leader Chin Peng passed away this week at the age of 89.

That was at a Hat Yai hotel at the first reunion of the former comrades of the defunct Communist Party of Malaya (CPM), to commemorate the 20th anniversary of the peace agreement with the Malaysian government.

When he passed away on Monday morning, only a 50-year-old niece was at his side. His son and daughter were not there, while his wife Khoon Wah died five years ago.

Chin Peng lived an elusive life right until the end.

My first meeting with him was also my last chance to talk with a man whose tumultuous life marked an important chapter of Malaysia's modern history, a story I first encountered in my university classes 30 years ago.

Chin Peng, as head of CPM, led an armed struggle against the British, the Japanese and the Malaysian governments.

Even in death, his name still causes so much bitterness in Malaysia that, after 50 years as an independent nation, its rulers still could not allow the ashes of Chin Peng to be transported across the border, let alone allow him to be buried at his seaside home village of Sitiawan in Perak state.

Few Thais know that Chin Peng's real name is Ong Boon Hua. That is not surprising. For a country that is proud of not having been colonised, Thailand has little interest in other Southeast Asian countries' struggles for independence through armed conflicts against western imperialists and the Japanese invasion.

What happened after independence was often not any less brutal and bitter. The early stages of nation-building was marked by fierce political infighting and competition for precious natural resources among different ethnic groups.

Chin Peng might be a freedom fighter for some. But in the dominant Malay country, Prime Minister Najib Razak maintains that Chin Peng would be remembered as a terrorist who led a violent guerrilla movement that caused countless deaths of civilians and security forces.

Former Prime Minister Mahathir Mohammad was equally stern. The communist leader had been living in Thailand for a long time and did not seem to want to be a Malaysian, he said. Chin Peng died in Thailand, so he should be buried there, Malaysia's longest-serving head of state added.

Chin Peng, had he lived until Oct 21, would have celebrated his 89th birthday in Thailand. It's true that he spent one-third of his life here, but he also spent an equal amount of time in China and Malaya, as Malaysia was known before.

In Thailand, Chin Peng was not seen as an enemy of the state. In fact, he won the friendship of many Thais, particularly the rank and file of the army.

When CPM fighters retreated into the mountainous region of the Muslim-dominated South, they were officially labelled as "bandits" but actually served as Thai proxies to fight against separatists.

Likewise, Malaysia is also sympathetic to Muslim fighters against the Thai state.

Chin Peng grew up in colonial Southeast Asia, and he believed his cause would bring about a different, better society. In his memoir My Side of History, he admitted that the Malaya he grew up in and fought against was a different world from the Malaysia of today.

The colours of that colonial world were stark, he wrote, with no grey shade to provide consolations and rationalisations.

Today's youth, who have known only stable government and live in an independent age of affluence, would find the choice he made as a teenager deeply puzzling, Chin Peng wrote in his book, published in 2003.

A revolution based on violence has no application in modern Malaysia or Singapore, with none of the conditions favourable to armed struggle existing today in these territories, he added.

That was his modest defence against his image as brutal, ruthless, bloodthirsty and indifferent to the sufferings of others.

Chin Peng, who grew up in an ethnic-Chinese world little different from that of the grandparents and parents of many Thais, cannot be judged without understanding the society he grew up in.

He said in his 527-page memoir that he had to be a liberation fighter after having witnessed how locals were badly treated by British colonialists. The CPM movement easily took hold amid widespread injustice.

Chin Peng said neither the CPM's Central Committee nor the Politburo ever adopted a policy of targeting civilians. It was the British colonials who used terror tactics to retain a hold on Malaya, he wrote. But in rare interviews elsewhere, he admitted that people in his movement could make mistakes.

His dream of seeking a just, communist state through armed struggle ended when the Thai army finally convinced him and CPM to sign a peace accord with Malaysia on Dec 2, 1989, after a half-century of jungle warfare. His refusal to surrender put him in a difficult position. His application to return home was thrown out by the Malaysian High Court.

"By persistently denying me entry into the country, the Malaysian authorities left a black mark on an otherwise much-acclaimed peace accord," Chin Peng said four years ago at the 20th anniversary of the peace accord.

His plea to have a chance to pay his last respects to his ancestors was also denied. So was his wish of "exchanging views with young Malaysians nowadays to understand how the history is shaped, exchanging ideas about how things move the world".

It is not unusual for the establishment to deny "enemies of state" the right to return home or receive some recognition. Thailand is no different from Malaysia in this respect. We have a long list of former leaders and intellectuals who had to spend their final days in exile _ Pridi Banomyong, Field Marshal Plaek Pibunsonggram, Puey Ungphakorn. Thaksin Shinawatra certainly does not want to be one of them.

Malaysia's refusal to allow Chin Peng's return _ even in death _ also reflects the rulers' concerns that it might open old ethnic wounds and stir debates about Malay supremacy.

The recent announcement by Mr Najib himself of a new Bumiputra economic empowerment agenda confirms the determination of Kuala Lumpur to retain privileges for ethnic Malays.

As a Malaysian activist in Kuala Lumpur put it: "The problem of Malaysia today is not chronic poverty, nor natural disaster, but the chronic intellectual and knowledge deficit. Many are still blind to a different version of truth and history. Many lack the the thirst to read, to seek truth."

The same can be said of Thailand.

Saudi Arabia swings again -- but for how long?