A temple of whatever religion shall be a place for peace, meditation, contemplation and prayer. In Prasat Preah Vihear (Phra Viharn in Thai), the ancient Hindu temple situated along the Thai-Cambodian border, this is regrettably not the case. 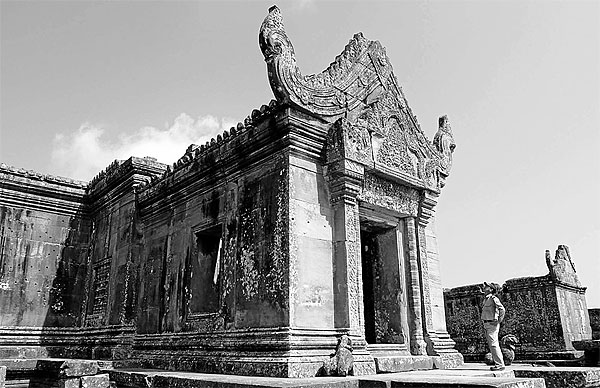 A man looks at a structure at Preah Vihear, an ancient Hindu temple, which is a constant source of political friction between Thailand and Cambodia. Thailand could put forward a plan that would be the perfect face-saving solution for both parties.

Having changed ownership several times in the first half of the twentieth century, the International Court of Justice (ICJ) decided in June 1962 that the temple was situated on "territory under the sovereignty of Cambodia" and that Thailand had to withdraw its forces from the temple and its "vicinity".

Following the controversial decision by Unesco in 2008 to inscribe Preah Vihear on its World Heritage list, the temple has become the object of political dispute and even military clashes between Thailand and Cambodia.

In a couple of weeks the ICJ will reconvene at the request of the Cambodian government. This time it shall define once and for all the rather vague term "vicinity" mentioned in the 1962 judgement.

For Phnom Penh, "vicinity" comprises the whole area of 4.6 square kilometres extending from the actual watershed line to the wrongly demarcated border marked in the French map of 1908.

Bangkok, on the other side, interprets "vicinity" just as the ground on which the main temple buildings are erected, including their immediate surroundings. This, however, is a much smaller territory.

Though Cambodia's sovereignty over the temple itself is widely accepted by the Thai government and the Thai general public _ maybe apart from a few nationalist hardliners _ the question of the 4.6 sq km disputed zone appears much more complicated.

Though it seems unlikely _ albeit not impossible _ that the ICJ will explicitly define the frontier line between Cambodia and Thailand in the disputed region according to the French map, even a best-case scenario will most probably bring about for Thailand a continuation and strengthening of the status quo with a de-facto Cambodian control of the disputed area where nowadays a Khmer hamlet and a small Khmer monastery endorse Cambodian claims.

Is there really no way out of that unfavourable situation? Is Thailand condemned to inactivity until the feared "Day of Judgement" thousands of miles away in The Hague?

We have good news. Yes, there is the chance that Bangkok can regain the initiative by stemming the tide at the very last moment.

It only takes guts and self-confidence to think the unthinkable. Thailand could put forward a plan that would be the perfect face-saving solution for both parties, instead of passively anticipating a ruling that would _ in the worst case _ make one side to be the total winner and the other side to be the humiliated loser with unforeseeable consequences.

The core of the new concept _ an Andorra-style solution with regard to Preah Vihear. But why and how should Andorra, located in the heart of the Pyrenees Mountains between France and Spain, become the blueprint for an everlasting peace between Thailand and Cambodia?

Above all, the landlocked European mini-state is the result of a unique compromise putting an end to a bitter quarrel over 468 sq km of rugged terrain.

Conforming to a treaty that was signed in 1278, the two rivals at that time _ the French Count of Foix and the Bishop of the Catalonian Urgell in today's Spain _ agreed to jointly preside over the principality of Andorra as its two co-princes. The Solomonian formula has lasted for amazing 735 years already.

In 2013, it is still the Bishop of Urgell and the legal successor of the Count of Foix, the President of France, who fraternally run charming little Andorra.

The pioneering model of Andorra, which is labelled a "diarchy" by constitutional experts, might be applicable to the case of Preah Vihear.

In practical terms it would mean there will be proclaimed the independent state of "Preah Vihear-Phra Viharn" on a territory of slightly less than 5 sq km (in comparison, The Holy See, the sovereign Vatican City State, huddles on no more than 0.44 sq km!).

The two diarchs of that temple state will be the King of Thailand and the King of Cambodia, and its population will consist of monks and local villagers from both sides of the Thai-Cambodian border, mostly people of Kui and Khmer ethnic background.

Security forces and the judiciary will cooperatively be organised by Thailand and Cambodia. The police station at "Preah Vihear-Phra Viharn" will be manned on equal terms. The same applies to the composition of the court which will periodically hold sessions there to administer justice according to civil and penal law and on the basis of a comparative adaptation of the relevant statutes in both Thailand and Cambodia.

The nub of that innovative scheme _ there will only be winners, no side runs the risk of losing its face. The project has one more asset _ it will be the starting shot for an economic miracle.

Just have a look at Andorra and its financial success story due to the tourism industry which services an estimated 10.2 million visitors annually; the second important factor is the status of the principality as an attractive tax haven.

Why should it not be possible to repeat the European masterstroke and create a second Andorra in Southeast Asia? Everybody will benefit from that operation since the new state can quickly become the catalyst of growth and prosperity in the region.

Tourists will certainly love the destination, and investors rush in, thanks to generous tax regulations. The new mini-state will turn into a symbol of eternal friendship between Thailand and Cambodia.

As the countdown in The Hague has already started, swift action is required. A written pleading _ proposing an Andorra-style solution as the guideline of a mutual agreement _ would place Phnom Penh in a severe dilemma.

Should Cambodia stick to her current position by simply betting on winning their case and just ignoring unpredictable reactions of a defeated Thailand? Or would it not be wiser to show generosity and far-sightedness by finally accepting the creation of independent Prasat Preah Vihear?

The eventual potential of an Andorra-inspired initiative is at least worth a try. For the sake of Thailand and for the sake of Preah Vihear that might eventually become a place of reconciliation, harmony and peace once again.

Volker Grabowsky is professor of Thai Studies at the University of Hamburg, Germany, and has written several books on the history and culture of Thailand and Laos. Rene Gralla is a German journalist and lawyer; he is an expert on constitutional and international law and a political writer.