How Goenka led others from bondage to liberation
Opinion

How Goenka led others from bondage to liberation

The guy must have had a pretty big mind. That was the conclusion I reached at the end of my first "Goenka retreat" a few years ago. 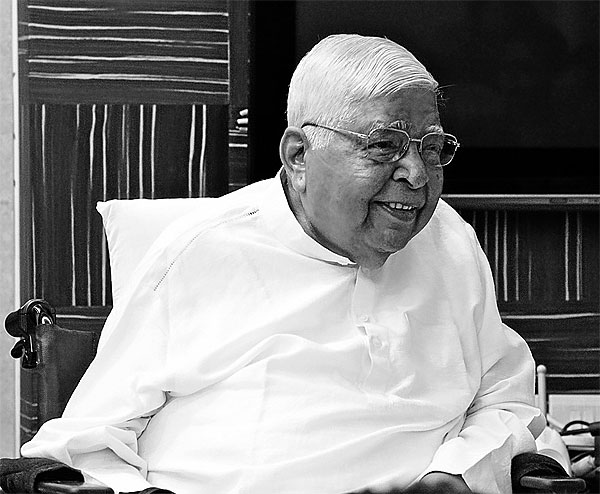 A Hindu businessman turned meditation master, SN Goenka dedicated over half a century to reviving the transcendental art of ‘Knowing Thyself’. PICTURE COURTESY OF THE FOUNDATION FOR PROMOTION OF VIPASSANA MEDITATION UNDER THE PATRONAGE OF H.H. THE SUPREME PATRIARCH

Why? For all the self-torture I went through over 10 days _ among Thai meditators, "Goenka" has been synonymous with an extremely rigorous regimen _ the unfolding of sensations and inner discoveries seemed to flow more or less along the path envisioned by the teacher.

Every night, I would discover that my experiences during the daytime would be aptly dissected in his dhamma lecture.

It felt almost like listening to a shrink's prognosis of my daily emotional turmoil, but even better, as Goenka's kind voice, peppered every now and then with his mirthful laugh, also showed us how to climb out of the vortex. For good!

Moreover, the whole thing took place without his physical presence. Back then, the lectures were replays of cassettes on a radio (now practitioners can watch DVDs of Goenka's original dhamma talks, in English with Thai subtitles).

Every step of the retreat _ from the waking bell at 4am to the breaking-down of the meditation structure in each session _ has been routinely carried out in exactly the same fashion in every Vipassana meditation centre across the globe (164 branches, as of 2012).

Are the causes of human suffering, and ways to end them, that commonly predictable?

Praised for his "unparalleled" role in disseminating the practice of Vipassana or insight meditation worldwide, Satya Narayan Goenka was a unique pioneer of what is now referred to as lay Buddhism.

The former industrialist founded a rather unique model that is stripped of typical religious paraphernalia.

Run by volunteers, the retreat programme is open to people from all denominations and social standing.

Classes are held for anyone from business executives to prison inmates, teenagers to older adults. There are few requirements except to follow a strict set of rules, such as keeping the precepts and vows of silence throughout the programme.

You cannot even pay for the course unless you have completed it. The organisation accepts donations but only from individuals who have been through at least one of its retreats.

Yet it keeps growing steadily. From a small gathering Goenka organised for his parents and a few relatives back in Bombay in 1969, someone once related to me that at every hour throughout the day, one of the numerous Vipassana centres must be replaying his recorded voice to guide students through the meditation session.

If Goenka's endeavour was a religious mission, it would be a very subtle one indeed.

In 2000, he delivered a speech at the UN Millennium World Peace Summit, arguing how he never supported conversion from one organisation to another, but rather "conversion from misery to happiness, from bondage to liberation, and from cruelty to compassion".

That was the very first message he received from his mentor, Sagyayi U Ba Khin (1899-1971), Myanmar's first accountant-general and prominent Vipassana teacher at the time.

Having suffered from severe migraines, Goenka was advised by a friend to try meditation. Born into a conservative Hindu family, he was initially hesitant, lest he might join those "atheists".

But the excruciating pain was such that he decided to give it a try anyway. He never looked back.

Intriguingly, post-war Myanmar and Thailand both witnessed the early generations of lay practitioners, when the practice of Shamata (concentration) and Vipassana meditation was increasingly introduced outside the monastic realm.

In 1952, U Ba Khin set up the International Meditation Centre in what was then Rangoon, where Goenka worked as a teaching assistant for fourteen years.

It was U Ba Khin who suggested Goenka teach in English, and later, supported his decision to go back to teach in his motherland of India, the birthplace of Buddhism.

There was a traditional belief in Myanmar that 25 centuries after the time of Buddha, dhamma would return to its origin before spreading around the world.

Goenka recalled his teacher telling him, "Goenka, you are not going. I am going!"

Goenka's ties, and gratitude, to Myanmar are evident in the design of the Global Vipassana Pagoda, one of his final projects, completed in 2008, which was modelled on the famous Shwedagon Pagoda in Yangon.

Located on the outskirts of Mumbai, the structure is the world's largest hollow stone dome, constructed without supporting pillars. It currently houses the bone relics of Lord Buddha donated by the Sri Lankan government and the Maha Bodhi Society in Bodh Gaya.

Despite years of vociferous efforts, however, Goenka's wish to have the Buddha's relics relocated from the National Museum in New Delhi to the pagoda in Mumbai remains unfulfilled.

But the teachings of dhamma will hopefully live on.

The meditation master passed away on Sunday night at his home in Mumbai, aged 90. Goenka is survived by his wife Mata Elaichidevi, also an adept meditation master, six children and an extensive body of written work.