Colours now split generation that once fought together
Opinion

Colours now split generation that once fought together

As Thais commemorate the October upheavals this month, a new sentiment has emerged that challenges the old power cliques and warns that they can no longer manipulate politics. 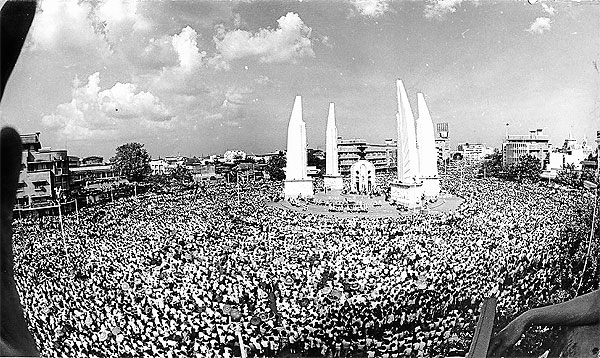 A historic moment at the Democracy Monument during the October 1973 uprising as captured by photographer Satharn Pairaoh, then Bangkok bureau chief of ABC News. Four decades on, the pro-democracy movement has evolved into colour-coded politics with different versions of democracy.

As modern political development evolves, there is an increasingly strong antipathy towards not only the military but also the judiciary as tools of the old powers.

This sentiment has been reflected in the commemorative events of the past week, especially those organised by Fah Diew Gan journal and the Committee on 14 October for Absolute Democracy.

This year's October commemorations differ from those of previous years. Members of the so-called "October Generation" seem to no longer want to romanticise their political endeavours _ an attitude that prevented them from looking too deeply into who was behind, or who took advantage of, those two political upheavals.

The commemoration events currently under way are demonstrating the differences in ideologies among those steering the loosely-knit '70s student movement which played a key role in the historic uprising against the military dictatorship of Field Marshall Thanom Kittikachorn and his clan.

Ditto for the differences of three years later when the student movement was crushed by extreme right-wing factions. (Leading student figures headed to the jungle, where they joined the now-defunct Communist Party of Thailand, or CPT.)

Academics have always emphasised that the union of the CPT and the armed resistance to the government was a "revolution". But there were also clashes among the students and the dominant Maoist faction inside the CPT.

But as China distanced itself from the CPT in a bid to establish formal relations with the Thai state, that students' "revolution" came to an end. Following the so-called 66/23 amnesty policy by the Prem Tinsulanonda administration, the students abandoned their jungle bases and headed home in the early '80s. Some of them went abroad to further their studies and in the following years managed to establish themselves in various areas _ as academics, politicians, artists, business leaders and community leaders.

Today, the October Generation, with its disparate ideologies, has become a major force in modern Thai society, influential in the political, academic and cultural spheres.

After the October events came the May incidents _ the May 1992 uprising and then the May 2010 bloody crackdown, both powerful reminders of "unfinished democratisation".

Without the two May incidents, the October commemoration would probably remain a standalone celebration in which the people largely had forgotten the "players" among the networks of royalists, including the military, behind the overthrow of the Thanom-Prapas-Narong dictatorship in the early '70s.

It was this "power establishment" that three years later suppressed the "people's movement" which was regarded as a threat to the royalist/nobility network.

In May 2010, the suppression of the red shirts effectively brought into focus the so-called "network monarchy" and its role in Thai politics.

In consequence, resentment grew towards the judiciary for alleged double standards. For example, the dissolution of the Thai Rak Thai Party (but not the Democrat Party) and the imprisonment of red shirts (as opposed to the lighter treatment of the yellow shirts).

Interestingly, the satirical Chinese opera about Judge Bao Qing Tian, staged at Thammasat University's auditorium on Oct 6 and again yesterday, is a powerful analogy about the lack of justice in the Thai political environment.

However, it should be noted that peoples' movements since the '90s have not been geared towards changing the regime but to bargain/pressure and/or negotiate with state apparatus, particularly the bureaucracy.

However, any differences that may have been subdued among the October Generation are now being made quite explicit in the wake of the rise of colour-coded politics.

Many student leaders who were once considered part of the progressive forces of society have now become conservatives, teaming up with the traditional elites to contain what they view as destructive capitalism _ largely referred to as Thaksinomics.

No wonder the 40th October anniversary commemoration is being held separately from the 37th October commemoration. The one that took place at Thammasat University yesterday largely involved red-shirt groups. The other one, which takes place today at the October 14 Memorial on Ratchadamnoen Avenue, involves mainly yellow shirts.

The political division in the October generation may be a disappointment for some. But change is normal.

In time, the ageing October generation will eventually fade out and soon give way to the "May Generation" who will take the lead in scrutinising and defying the old powers that seek to dominate the people.