When I took part in the Oct 14, 1973 student uprising, I could not say I had any democratic ideology. I was just a young student who had a fiery dream; I could not stand injustice nor tolerate those who abused their power. 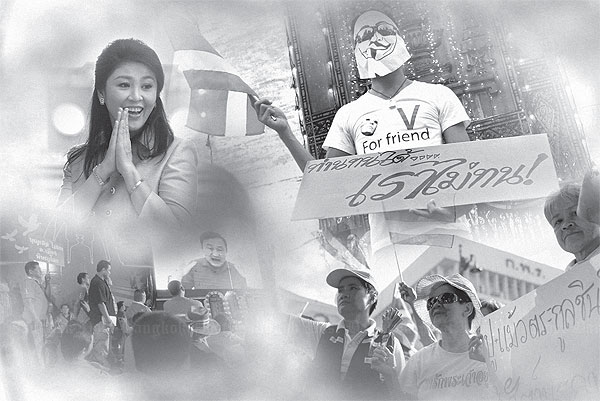 Thai society must divert its energy away from focusing on Thaksin Shinawatra and the red-yellow divide and instead work to decentralise the structure of the state to allow local communities to take development matters into their own hands.

Forty years later, I dare not say I now have any particular ideology either. I am not even sure how the mentioning of ideology, political reform, charter amendment or the call for reconciliation between the red and yellow factions will be able to solve the nation's deep-rooted problems.

My only hope after 40 years of lost opportunities is for every party in society to rightly identify the nation's problems in order to begin solving them.

If Thai society is to focus its energy on moving in the right direction, we should no longer consider Thaksin Shinawatra and the red-yellow conflict as a crisis confronting the nation. It is just a problem waiting to be solved. The Thaksin problem is not a democratic crisis, but a problem of good governance, lack of transparency and accountability. It's a problem of corruption and legal violations. Therefore it requires solutions that deal directly with those issues _ not a coup d'etat.

Those who do not use legal mechanisms but stick to political means, or those who want to amend the charter as an answer to the problem must be ready to accept the consequences. Thaksin must also be ready to take responsibility for insisting on pushing for what he wants without following proper procedures, which will spur widespread protests.

Populist policies and the Pheu Thai Party's likelihood of winning consecutive elections are not democracy problems. They are economic problems. What academics could do is to voice their concerns. If the problems become critical, the affected business sector will come out to protest. Or the people who are facing chronic inflation will rise up and protest themselves.

The old political model and paradigms we have adhered to over the past 40 years have caused the Thai state _ especially the army, the establishment and those in the business sector _ to hold the wrong views and pursue the wrong strategy by not curbing the problems of vote-buying and political corruption, to the point that they have now become rampant.

Another big mistake which has aggravated the elites' lack of support for democracy is the Thai state's focus on nationhood or national security in a superficial and risky manner. This includes centralisation based on "Thainess" and Thai nationhood in all aspects of life, and the excessive emphasis on the monarchy as the centre of everything.

There have been excessive efforts to make His Majesty the King the centre of political stability, economic development and morality, so much so that it has created risks. This is because the present monarch has won overwhelming love and respect from the populace. There should be consideration about the continuity of the institution; whether or not future monarchs who are brought up in different environments can continue His Majesty's missions and strategic roles. And if not, what will be the consequences?

These factors have narrowed people's perception of their history, language and traditions. Public discourse on culture and history are subsequently narrow. National history focuses excessively on royal history and ignores social history _ how ordinary people and various professions contribute to nation-building. It also ignores the cultural history of ethnic and indigenous peoples, as well as ethnographic, economic, and local history. Thai people's perception of history, society and the arts are therefore restricted.

Such narrowness has disastrous results, such as the violent conflict in the three southernmost provinces. We should ask ourselves a sincere question: What do we know about this region except for the issue of the Malay insurgency? We know little or nothing about the local people's well-being, progress, or frustrations. Our frame of thought toward the southern Muslims is limited by what the state has imposed on us, so much so that there is a lack of communication.

In the past 30-40 years, had we been given a chance to understand and appreciate their culture through travel, interpersonal communication through the use of local Yawi and Thai languages, or had the media regularly exposed us to life in the Muslim Malay region _ their history, culture, architecture, attire, legends and music _ the rampant violence might not have occurred.

The denial of community rights, which occurs not only in the deep South but across the nation, has made things worse. There are no channels for communities to argue or to express their dissatisfaction. We should not take things for granted and think what is happening in the deep South will not happen in other regions. Globalisation, Aseanisation and the power of social media will increase cross-border interactions and broaden the search for new experiences in different cultures. This will encourage locals to revive their own identities to attract economic investment, tourism, respect, appreciation and state recognition.

Our country's major challenge in the future goes beyond mundane democratic problems. Before us is a complex problem which essentially involves Thai statehood. It raises the questions: What should the Thai state look like? And how should our political system be structured.

We should seriously think about how we can reduce centralisation and increase regional, local and community power so those communities can determine by themselves how to manage their natural resources, education and economic development while maintaining their identity, local history and traditions.

We should accept that centralisation can no longer move our country forward. It is also clear that military coups are a thing of the past and coup-makers will face fierce resistance. Even when coups d'etat happen by force, the conservative powers behind them lack the necessary personnel, vision and paradigm to lead the nation. I don't think an individual or a group of people, especially traditional elites, can lead the Thai state any longer.

I think the change ahead will come through active participation from politicians, thinkers and activists at regional levels, as well as from grassroots movements. Their roles will at least play an important part in the process of change.

Maybe this is the answer to the ongoing red-yellow conflict _ the shared mission to decentralise the political, economic and cultural power structures, to free people from the control of the ruling elites and middle-class, and to empower local communities and regions.

Another point to ponder: If the red movement really represents the local and grassroots people, why has it not demanded meaningful decentralisation from the Pheu Thai Party? Why has it not made any criticism of the pros and cons of Pheu Thai's populist policies and their related fiscal problems?

At the same time, the yellow movement, which represents the conservatives, should push the traditional conservative powers to accept decentralisation, debunk their narrow frame of mind, and consider their own limitations in order to remodernise themselves. With this, we can achieve real reconciliation and continue the Oct 14 mission to create democracy _ even if only partially.

Translation from a speech in Thai by former student leader Thirayuth Boonmi to mark the 40th anniversary of the October 14, 1973 uprising. Mr Thirayuth is director of Thammasat University's Sanya Dharmasakti Institute.

Hardship by the gross