The politics behind Thailand's amnesty controversy

Thaksin Shinawatra has achieved a feat undoable by other Thais. By trying to absolve himself of a criminal conviction and other alleged crimes and infractions, Thaksin has united his rank-and-file supporters and opponents. 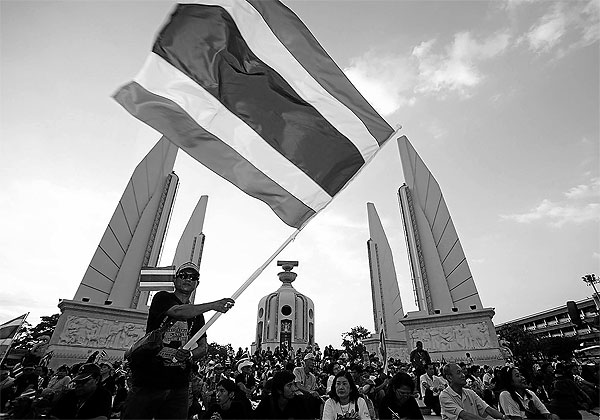 A man waves a Thai national flag in front of the Democracy Monument where protesters are rallying against the blanket amnesty bill. PATTARAPONG CHATPATTARASILL

What is now considered a radioactive blanket amnesty bill designed to get him off the hook by exonerating others has closed the gaps among all colours in structurally polarised Thailand. Fordiametrically different reasons, all of the reds, yellows, multi-colours, and all other stripes are squarely opposed to the amnesty bill, which has reached the Senate after passing the Lower House.

Paradoxically, the bill brings the self-exiled Thaksin not closer but takes him further away from Thailand. It has sowed deeper divisions in society and renders reconciliation more problematic. As such, the bill should be aborted.

The government of Prime Minister Yingluck Shinawatra, Thaksin's youngest sister, should concede to enable pro-government senators to scuttle the bill. Otherwise the Constitution Court will be forced to come up with yet another judicial intervention, which is damaging to the judiciary in the long run. The sooner the bill is quashed in parliament, the better.

Many are puzzled by Thaksin's amnesty manoeuvre at this time and his inability to foresee such widespread opposition. Not since the months leading up to the military coup in September 2006 have the anti-Thaksin columns been so broad-based and concerted.

Since the coup, street demonstrations have taken turns for and against him and his opponents. But this time, they are lined up against the current amnesty bill, which stipulates provisions to free Thaksin and virtually all political actors and bit players in Thai political crisis dating back to 2004, including opposition Democrat Party leaders like Abhisit Vejjajiva and Suthep Thaugsuban and yellow-shirt leader Sondhi Limthongkul of the People's Alliance for Democracy.

To be sure, Thaksin had a game plan that may have been much more costly to him than calculated.

As Ms Yingluck passed the midway point in her term, Thaksin's adversaries and opponents appeared spent and unable to gain traction in their street protests time and again. The timing was conducive for an amnesty bid. Thaksin, no doubt egged on by Pheu Thai Party sycophants, went for it this time because it is opportune.

Moreover, Thaksin has contingency plans. The bill can be withdrawn in the Lower House or allowed to be scuttled in the Senate. If it proceeds to the Constitution Court, another judicial intervention would be costly and unattractive to the judiciary.

Thaksin probably foresaw these obstacles but went ahead to see what he could get away with.

If push comes to shove, Thaksin can press the election button and expect to win again. For the red shirts and Pheu Thai voters, deploring the amnesty bill is not the same as voting for the opposition party. Pheu Thai will most likely win an election again if one were held tomorrow. This is Thaksin's ultimate fallback position.

In creating volatility and turmoil this time, Thaksin has again exposed and will likely exhaust his opponents. Virulent anti-Thaksin columns are hopping mad, seething with anger and hatred, while he is abroad somewhere, accustomed and impervious to the anger against him.

If the bill is aborted, would they simply go home and be happy with that? Or would they go all the way and protest to overthrow the Yingluck government, perhaps coinciding with the International Court of Justice's Preah Vihear decision next week? Either way, the effort and onus are on the anti-Thaksin side.

In addition, Thaksin has lured the Democrat Party to up the ante and expend any precious political capital and credibility that they have left. Thailand's main opposition party in parliament is now democratically compromised as it leads mob protests in the streets.

The desperation is understandable for a party that cannot win power through the ballot box. Committed Democrat voters will still vote Democrat but those swing voters who are not aligned to particular personalities and party lines may throw in their lot elsewhere or not vote at all.

One way forward for Thailand, time and again, is to see the opposition party winning the vote and taking power to keep Thaksin away.

Such electoral legitimacy would silence Thaksin's supporters and put down the Thaksin challenge for good. Doing so requires house-cleaning in the Democrat Party, whose leadership and core supporters are unwilling to confront at this time.

At the same time, the electoral landscape is ripe for a major third-party alternative, which does not have to win outright but can realign the electorate and the political party system away from Thaksin's indisputable dominance.

Most likely of all, Thaksin's amnesty scheme is a test of strength for his opponents and adversaries. He may just want to see if the powers-that-be that booted him out in 2006 and kept him out in 2008 are still around and active.

If these special powers are not felt, seen and heard, he would know what he is up against in the near future.

His Royal Highness the Crown Prince summoned the police for an audience during anti-government protests on Aug 6. This may be at the core of Thaksin's calculation.

Testing the ground for what lies ahead may be one of Thaksin's main motivations.

What he probably underestimated was the livid and disillusioned reactions of the rank-and-file red shirts under the leadership of the United Front for Democracy against Dictatorship.

The split between the UDD and its red-shirt foot soldiers and Thaksin with his Pheu Thai machinery may be the most profound outcome of this amnesty-driven round of brinkmanship and confrontation. These red shirts care less about Thaksin's homecoming but more about not exonerating those they see as the perpetrators of the April-May 2010 army crackdown against their brethren.

Letting the likes of Mr Abhisit, Mr Suthep, and certain military generals off the hook to enable Thaksin's return is unacceptable to the red shirts, whereas not absolving Thaksin and allowing him home galvanises the other colours. Thai society is thus farther apart amidst this amnesty controversy.

But Thaksin's relative marginalisation and alienation from his red-shirt supporters offers a chance to find new ways to reconcile. The more Thaksin is away and out of the picture, the less he can manipulate and the more his erstwhile supporters and entrenched opponents can discuss terms of compromise and Thailand's way ahead.

It is hard work that requires mutual acceptance and accommodation. Thaksin's adversaries must acknowledge that his supporters are genuine and legitimate, their voices and votes to be heard and counted. Thaksin's supporters will need to shunt him and his electoral machine aside and broach the terms and steps of compromise so they can live in a peaceful country that can move beyond the last decade of polarisation and lost opportunity.