This week, governments are gathering in Warsaw for a crucial round of climate negotiations, with both expectation and ambition running at an all-time low. But it does not have to be like this: the Warsaw meeting provides an opportunity to galvanise action on one of the most potent forces driving climate change _ the billions of dollars spent by governments on fossil-fuel subsidies. 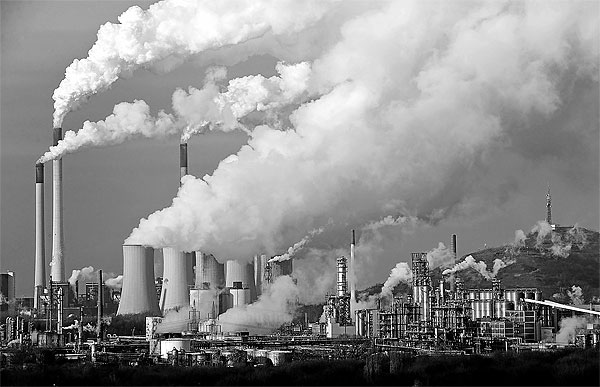 A file photo shows steam and smoke rising from a coal power station in Gelsenkirchen, Germany. The climate-change targets are being undermined by governments’ fossil-fuel subsidies. AP/MARTIN

The Warsaw talks are a staging post on the route to the 2015 United Nations climate summit in Paris, at which governments will seek to forge an agreement that prevents dangerous climate change, defined as global warming of more than two degrees Celsius. Failure would expose future generations to catastrophic climate risks, while trapping millions of people in poverty as a result of more frequent, intense and protracted droughts, floods, and storms.

Basic carbon arithmetic illustrates the scale of the problem. According to the most recent assessment of the Intergovernmental Panel on Climate Change, we are on a trajectory toward exhausting the 21st century's entire carbon budget by 2030.

So, can we head off the impending collision between the energy systems driving the global economy and our planet's ecological limits?

The necessary innovations are emerging. Recent developments in wind, solar, tidal, bio-energy, geothermal and fuel-cell technology are transforming the scope for low-carbon energy production. Aside from saving the planet, these technologies could open up new investment opportunities, deliver affordable energy, and sustain growth.

But that potential will be realised only if governments actively pursue green industrial policies. They need to align the goal of avoiding dangerous climate change with disincentives for carbon-intensive energy _ including taxes, carbon markets and support for green alternatives.

Fossil-fuel subsidies have the opposite effect. They actively promote carbon-intensive energy and deter green investment. According to the International Energy Agency, governments pumped US$523 billion (15.7 trillion baht) into fossil-fuel subsidies in 2011. From a climate-change perspective, this is a world turned upside down: for every $1 in support for renewable energy, another $6 promotes carbon-intensive fuels.

Most fossil-fuel subsidies can be traced to developing countries, where they drain budgets and provide transfers to wealthy households. But rich countries operate their own subsidies, which average $7 for every tonne of CO2 they emit. Research by the United Kingdom's Overseas Development Institute that examined tax and consumer subsidies provided by governments in 11 OECD countries found support equivalent to $72 billion, or around $112 per adult. It is difficult to think of a more irresponsible use of public money.

The inconsistencies between climate goals and energy policies are becoming increasingly stark. Germany is providing lavish support for the construction of new coal plants. Britain offers generous tax concessions for oil and gas exploration, including bumper deals for companies involved in fracking. The United States spends heavily to subsidise gasoline and other fossil fuels. In all of these cases, bold climate-change targets are being undermined by business-as-usual subsidies.

Carbon markets could provide a corrective to fossil-fuel subsidies, but they are not doing so. The European Union claims the mantle of global leadership on climate change, yet its leaders have allowed the price of carbon in the EU's Emissions Trading Scheme to collapse, owing to reckless over-supply of carbon credits.

By contrast, South Korea has signalled that it will enforce a greenhouse-gas cap that is projected to push prices to 20 times the EU level by 2017 _ and green-energy investment there is booming.

With energy prices moving centre stage, there is a danger that already-weak incentives for investment in low-carbon energy will be further undermined. Across Europe, calls for "affordable energy" are fast becoming a euphemism for increased fossil-fuel subsidies and a rollback of commitments on green energy.

The government has delayed setting a decarbonisation target for electricity generation, there is uncertainty over pricing for green energy sources, and the Green Investment Bank is under-financed. Unsurprisingly, investment in renewable energy has fallen to a four-year low.

Expecting the Warsaw climate negotiations to deliver a major breakthrough would be a triumph of hope over evidence. Yet the talks provide a platform for practical action _ and for governments to demonstrate leadership by example.

The G20 countries, which have already agreed, in principle, to phase out fossil-fuel subsidies, should seize the moment. They could hold a "side-summit" in Warsaw at which they set a schedule for translating principle into practice. The target should be full elimination of all fossil-fuel subsidies by 2020.

Rich G20 countries could go further and faster. They should pledge to eliminate all subsidies by the time they arrive at the UN's COP 21 climate-change summit in Paris in 2015, starting next year with the withdrawal of all support for gasoline and for coal, oil and gas exploration. And they should divert part of the savings into energy cooperation aimed at supporting low-carbon transitions in developing countries.

Eliminating fossil-fuel subsidies would be just one small step on the road to a global climate agreement. But it would at least be a step in the right direction _ and it might just restore confidence in a negotiating process that is slowly going nowhere. 2013 PROJECT SYNDICATE

Kevin Watkins is the director of the Overseas Development Institute.

The new Omicron subvariant CH.1.1, which has been detected in 67 countries including Thailand, can evade immunity produced by long-acting antibody (LAAB) vaccines but its rate of transmission is low, according to the Department of Medical Sciences says.