Don't 'Thai' to me
Opinion

It is reported there is a new English slang term being used by people in Malaysia, Hong Kong and Singapore. The phrase is "Don’t Thai to me". It means don’t lie to me or cheat me.

There’s a bit of a controversy whether this story is real. Not least of which is that the people of those three countries ought to be able to come up with a phrase that uses good English.

"Don’t Thai to me" is not good English, so it might make more sense that a Thai came up with it. But then again, does  slang have to be in proper English? Furthermore, perhaps the poor usage of English is an intended irony, after all, the butt of the joke is the Thai people – our English-language skills are like our traffic skills, we don’t know and we just don’t care. 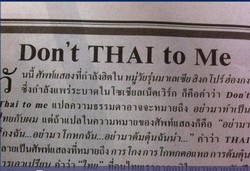 An article taken from a Thai newspaper and posted on the popular Pantip.com web board heads the discussion on the use of the slang phrase, "Don't Thai to Me".

So we lie and cheat, plus we have poor English language skills. Sounds about right? Sadly, yes. The good news is that reactions from Thai people have, by and large, been positive.

On the radio and website forums, there is some of the usual nationalistic outrage. Most people seem to accept the truth of it and urge Thailand to instead make a change, so that we will no longer be the butt of the joke and guilty of the accusation.

The down side is many people seem to think the joke refers only to politicians, or to those of the opposite side of the political divide. Basically, they seem to think it’s about other Thai people, and not about them.

Then there are those who got a bit clever. Those who say, well Thailand is run by the Thai-Chinese, so the Chinese of those three countries should know well about lying and cheating. Now that’s a can of silkworms, isn’t it?

It doesn’t matter that much where the slang originated. It’s already here and people are talking about it. So let’s discuss it. First, let this column concludes that "Don’t Thai to me" is about all of us, rather than just one group of people or another. We are all Thai, after all.

Second, let’s understand that we cheat and lie for a good cause. It’s a matter of cultural perception. We lie because it’s polite. Our social norm is based on "face value". We must give face, even if it means lying. To lose face is a great embarrassment.

In the traditional Thai environment, try being that one person on a team, or in an office, who tells the truth, even if you tell it politely. You’ll still be the black sheep. The truth is inconvenient in our culture.

In addition, we cheat because how else are we to get anything done? The system that runs this country, from top to bottom, is generally incompetent. There are many forms of cheating that are a cultural norm and all are a form of corruption. We all do or have done it.

Searching for the Holy Grail would probably be easier than trying to get anything done in Thailand if we follow rules and procedures. So we cheat by offering a gift basket to the bureaucrat in charge. This is but one example.

A childhood recollection: It took six months to just get a phone number for the house – and that’s after a nice gift basket, plus the use of connections by a person of influence. In general, things are much better at the present time, but we still carry the baggage of incompetence.

There you have it. In the extreme, people lie and cheat with ill intent. But as a cultural norm, we Thais lie to be polite, to save face, and we cheat just to get things done. Therefore, "don’t Thai to me" isn’t just a slang. It’s a fact of life.

Third, to evolve from this is to educate in new values, which will take time and will require shiny examples to lead us. The latter, we simply do not have, at least not in politics, but that doesn’t mean we never will.

The truth may hurt, but the wound will heal, and we will learn from it. That’s progress. On the contrary, ignorance is bliss, so we lie for the sake of face value. The result is that collectively we are blissfully stupid. That’s the slow death of human civilization.

Furthermore, if we cheat to get things done, no wonder our politicians also cheat. Politics is simply a by-product of society. Corrupt politicians are but a reflection of corrupt people. Then we whine about it.

Stop whining and start doing. In addition to demanding politicians and civil servants end their corruption, we should ourselves stop cheating by circumventing, bending or breaking the rules in everyday life.

We also must build a system we can trust and create rules we can rely on. Don’t look for other people to change the world. We can all change the world by first changing ourselves.

Truth and trustworthiness, those are the values we should aspire to. But admit it, even if there are many exceptions, that slang term is currently an accurate depiction in general: "Don’t Thai to me" is "don’t lie to me"  and "don’t cheat me", but do give me boom boom long time.

Get past the Thai-China trade deficit