Suthep's demonstrators must stay within bounds of law
Thailand
Politics

Suthep's demonstrators must stay within bounds of law

Anti-government demonstrators' seizure of parts of the Finance and Foreign ministries goes beyond being a "peaceful" protest.

It is a basic right of people to rally to express their disagreement with any government, but those demonstrations must be peaceful and within the bounds of the law. 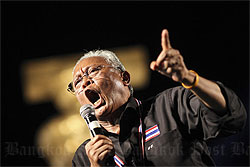 Since Oct 31 when the Pheu Thai Party, which leads the ruling coalition in the House of Representatives, passed the final reading of the controversial blanket amnesty bill in the early hours of the morning, former Democrat Party MP Suthep Thaugsuban led protests to quash the bill, and he was successful when the Senate struck it down, leading to the bill being technically killed.

But Mr Suthep did not call off his protest. Instead, he escalated it to oust the Yingluck Shinawatra government and target the so-called "Thaksin regime".

His goal was supported by many people who disagreed with the Yingluck government's actions and the protest reached its peak on Sunday when hundreds of thousands of people went to Democracy Monument to express this common demand.

Mr Suthep announced on Sunday a further escalation of his protest. At first, he planned to scatter demonstrators into 13 groups and march along major city roads to different destinations, including offices of key state agencies and headquarters of free-to-air TV stations.

But for some reason, he then ordered protesters to storm into the offices of the Finance Ministry and the Budget Bureau in the afternoon. Later, another group of demonstrators seized offices inside the Foreign Ministry.

They alleged the Yingluck government had become unlawful since it had refused to accept the ruling of the Constitution Court in nullifying the charter amendment draft last Wednesday. They claimed their occupation of these state offices was to prevent officials from working for such an illegal government.

However, their actions are also unlawful. Seizing state offices and preventing government officials from performing their work will only end up hurting the country and the public.

We strongly opposed the government's move to try to pass the blanket amnesty bill. But we also vehemently disagree with the illegal actions by the anti-government protesters on Monday.

Seizing state agencies is in the same unlawful category as the storming of Bangkok's airports by the yellow shirts in 2008 and also the siege of the downtown business centre by the red shirts three years ago.

We earnestly hope the anti-government protesters will rethink their actions and leave these agencies immediately to allow officials to resume their work as normal.

We support the exercise of the basic rights of the people but any actions taken must be legitimate and lawful.

On the other hand, we also call for the government to work for the country and the public - not for any individual's personal interest - and stop taking advantage of their majority power in parliament.