We are witnessing something that perhaps has no precedent in Asian history: A liberal and conservative reaction not against a revolutionary mass, but against an emergent authoritarian populist regime that took shape in the early 2000s, that would displace old elites with a radically modernising regime legitimated by the ballot box but ruled by authoritarian means.

While economically redistributive and a better channel for immediate popular needs, it is a regime that, in its early expressions, clearly demonstrated a dangerous propensity to arbitrary rule and human rights abuse.

In response, the anti-Thaksin movement has organised in ways that equally embrace abusive arbitrary rule. The tax-paying middle class reaction against the Thaksin regime and its electoral among the supposedly "uneducated" openly embraces the liberal idea of "capacity" - that sometimes people are not ready to be free. The people may beg to differ and yet become a revolutionary mass. 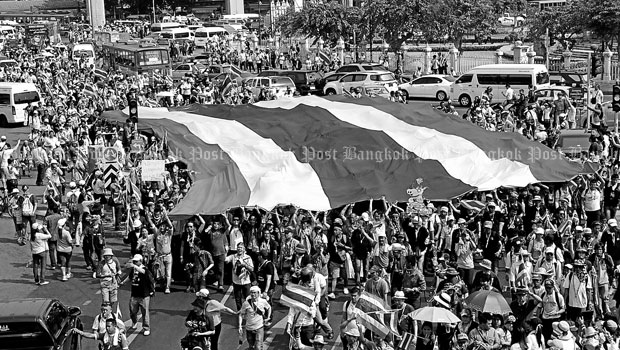 Anti-government protesters carry a giant national flag. Demonstrators have become a common sight as Bangkok continues to be gripped by political turmoil.

Most prominently, the opposition Democrat Party believes that selective redistribution buys the Thaksin regime votes and permanent power. This makes loyal opposition impossible, as does the regime's attack on the putatively independent agencies of the state. Eschewing the ballot box, the Democrats now support street protests. This militant elite liberalism is willing to engage in authoritarian action and to pact with conservative elements in the state and among non-state forces.

The latest attempt to beat Thaksin is a form of thuggery centred on protest leader Suthep Thaugsuban's assault on the state. The idea of fascism has long been invoked to describe some of the anti-Thaksin movement's to replace parliamentary democracy with a hybrid corporatist parliament along with a strong monarchy - proposals present in 2008 but now mainstreamed. There are deeply conservative, potentially fascist trends currently in play, but a long view reveals that the repetitive dominant anti-Thaksin theme is the demand for relatively pluralistic institutions gilded by a liberal monarchy that regulates power in the absence of functioning checks and balances. There is of course a cacophony of rhetoric, but this is shouted loudest.

To simply see what is happening as a fascist reaction against democracy is to fail to imagine a muscular liberalism. This muscular liberalism takes to the streets in defence of the pluralistic political culture that emerged from Thailand's political settlement in the 1980s and which found expression in the 1997 constitution.

Liberalism is a weak political force, but for a generation it became a significant party of opinion shaping institutions. It needed establishment backing so it embedded a liberal doctrine based on royalism, using the concept of a citizen king who regulated the exercise of power for the purposes of freedom. Its success to discipline arbitrary power and military caprice was modest, but real, until Thaksin and the political forces he represented galvanised anti-liberal populist and pro-poor rhetoric.

If liberalism, however unevenly expressed, and allied with the right forces, was weak in the face of Thaksin's earlier assaults it has now admitted the futility of its cause. And by default it supports Mr Suthep's recent attempted putsch and efforts to enlist the military to intervene. The military, it should be said, was seen by the anti-Thaksin side as acting in a pro-democratic manner in 2006. Yellow-shirt intellectuals spoke of the Thai military as leading Thailand's own Carnation Revolution - referencing the 1974 Portuguese coup against a semi-fascist regime. In power the Thai military manufactured a relatively liberal 2007 constitution. It included provision for safeguarding power from democratic majorities and also provided mechanisms to embed anti-Thaksin proxies in the independent agencies of state to ensure a robust check on power to protect the pacted liberal-conservative state from the government party. And it stage-managed a referendum on the constitution. This produced a bare majority for the constitution's "clipped wings -liberalism" and its explicit retreat from a fully elected parliament. All this politics, it was claimed, was so that money could not dictate the sovereign will of the nation. But the electoral will of the nation wanted otherwise, twice returning pro-Thaksin parties.

The military's anti-Thaksin record is clear. When Thaksin fought to aggrandise power around his party the military eventually moved against him in September 2006. When the nominee governments of 2008 advanced his various agendas the military brokered a defection from the pro-Thaksin government allowing the Democrat Party to take power. And of course, the tragic events of 2010 showed once again that the military would, when provoked, engage in ruthless repression of the pro-Thaksin forces.

Will the latest crisis end in a fourth intervention? The preconditions are there: an overstretched Thaksin agenda including full amnesty and constitutional amendment to create a fully elected Senate. The relentless attack on the so-called independent agencies of state as illegitimate creatures of the 2006 coup (including the Constitution Court) shows Thaksin's centralised power agenda on steroids, even if it is now in retreat.

But intervention would be dangerous to the military itself this time around.

The 2010 violence demonstrated that the military is split. Indeed, intra-military violence occurred in limited doses. The problem facing the military is whether support of either side will lead to military defections and full scale civil war. At the moment 2010 is looking like a dress rehearsal for something much bloodier.

What is certain is that if the anti-Thaksin movements win the backing of coup-state agencies, they will take lessons from the 2006 "softie" coup, as Kasian Tejapira described it, and enact massive repression for the permanent eradication of pro-Thaksin elements. Liberalism is not normally associated with such things, but when it fights for survival it embraces states of exception like any political force. It will be, perhaps, even more vicious than what it seeks to conquer.

The Thai nation is now divorced. Two narratives of recrimination win polarised popular acclaim. In the endless chain of accusation and counter-accusation the truth lies somewhere in between. A practical truth that might emerge in this morass is a bipartisan return to the spirit of 1997 and an honest assessment by both sides of their respective flaws.

Can the Thaksin side admit that his was an authoritarian government that attacked the liberal elements of the 1997 settlement, and can the anti-Thaksin side admit that coups only delay the possibility of genuine reform? Such honesty can foster mutual trust and support for constitutional rule. Right now the opposing leaderships seem incapable of grasping the "inbetween-ness" of things.

Michael Connors teaches at the University of Nottingham, Malaysia Campus. He is the author of Democracy and National Identity in Thailand (2007).