From Thailand to Ukraine to Turkey and other places beset with contentious politics between electoral majorities and minorities, the sources of prolonged and visceral polarisation appear to stem increasingly from social media. 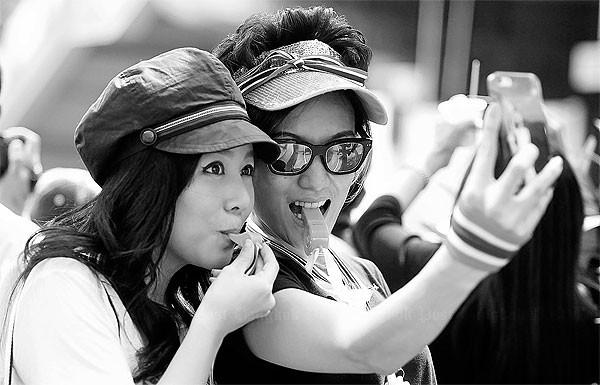 Anti-government protesters take a photo of themselves. Many protesters pose for pictures at the rallies and upload them onto social media. THANARAK KHOONTON

Once celebrated as liberating and freedom-enabling tools, social media has had more of a dividing rather than a unifying impact. It is as if we have found ourselves to be our own worst enemy and social media has become our weapon of choice to deepen differences and corrode the rough and moving consensus that used to hold societies together without endless and colour-coded street protests by one side or the other. The way to rectify and better utilise social media tools is to require accountability and promote technologies and practices toward inclusiveness and greater tolerance of diverse opinions.

To be sure, social media such as Facebook and Twitter generate democratising effects in authoritarian societies because popular dissent can easily find voice, mobilisation and organisation. The Chinese government, for example, has a vast IT army to keep domestic dissent on the internet under check and to reinforce media tools of control over its citizenry. China is the centre of the largest battleground where an authoritarian regime has been able to have its cake and eat it, achieving strong economic performance without democratisation.

The same is true of other less-open societies such as some of the Middle East and African autocracies, or Vietnam and Laos, with North Korea as the most extreme case. For relatively closed societies, social media foments liberalisation and liberation. These liberalising and democratising effects can only be suppressed at a high cost, but such coercion may not be sustainable. Social media and the internet more broadly are thus a revolutionary boon to people in authoritarian societies.

But in democratising societies, social media has produced polarising consequences. Thailand's political environment, for example, has been characterised by street protests in Bangkok, pitting the forces for and against the legacy and role of former prime minister Thaksin Shinawatra. The yellows and other non-red colours that have emerged over the past several years are squarely against Thaksin's return and opposed to the government of his sister, Prime Minister Yingluck Shinawatra.

When Thaksin's party machine wins the election, it could face the non-red shirts in the streets, unable to govern with any lasting semblance of stability and be eventually ousted by a military coup or judicial decision. These anti-Thaksin non-red shirts see him as the embodiment of Thailand's endemic corruption and abuse of power. But when his proxy governments were dislodged from office, the pro-Thaksin red shirts, who have favoured his policy ideas and ability to deliver, took to the streets. They felt the electoral system allowed them a voice and recognised their rights, even putting up with the corruption which they see as pervasive and unavoidable.

The widening gulf between the pro-Thaksin red shirts and the anti-Thaksin non-reds now appears irreconcilable in view of the current round of crisis and confrontation. The non-reds tune into their own social media like Facebook and Line, engaging in a dialogue of partisans. Their political TV channels are often the yellow-shirts' ASTV or more frequently, during this round of street demonstrations, the opposition Democrat Party's Blue Sky station. Less urbane and more rural-driven, the reds have similar social media outlets, and their TV station is Asia Update. This divide in media services is sandwiched by two parallel tracks of communication. The non-reds would hardly listen to the other side as much as the reds would avoid the opposing media channels.

And social media, such as Facebook, is fundamentally designed to exploit personal vanity and assemble like-minded friends, family, contacts and networks. It was not inherently set up to invite and befriend people who hold different views and preferences. While the divide between different political groups persists, the divisions also tend to entrench and deepen because like-minded social media cohorts and groups tend to reaffirm rather than to challenge each others' beliefs. This means, for example, that Thailand's polarised environment is dominated by a kind of groupthink on either side.

Perhaps the worst attribute of social media proliferation is anonymity. Without a reliable identification to promote transparency and accountability, most users in social media cyberspace deploy pseudonyms and assumed names that give them a sense of deniability and a tendency to overstate, overreact and offend. In authoritarian societies, this trend is understandable and acceptable. But as societies become more democratic, transparency and accountability should be promoted, anonymity marginalised.

The polarising effects of social media in emerging democracies are driven not just by advancing technology at cheaper prices but also by the loosening global structure after the Cold War. With its ideological and bipolar structure, the Cold War used to exert suppressive pressures against societal divisions. In communist societies, autocratic party rule quashed dissent and disallowed political divides. In freer societies, the imperative of fighting against communist expansionism provided a consensus that kept splits within societies manageable. Now in the 21st century, democratisation is on the march but social media trends may preclude the kind of consensus that would allow democratising societies to find common ground for unity and stability.

To rectify social media shortcomings, more transparency and accountability are needed. Content and views from pseudonyms should be devalued and a system of reliable and verifiable personal identification in cyberspace should be set up. This is not easy and can be abused by controllers of such a system.

But not long from now, cyberspace will completely resemble a virtual world of global connectors and communicators. Every PC connected to the internet has an identifiable number. In democratising societies, a similar system can be made for all individuals, everyone with a recognisable name and number when entering cyberspace. Authoritarian societies can follow when sufficient democratising effects take hold. The quality of democracy would likely increase with more transparency and accountability. Just think of what the Postbag quality of this newspaper would look like if pseudonyms were disallowed and real names are verified. Traffic might go down at first but quality would jump as writers are forced to take responsibility for what they write.

In addition, the future Mark Zuckerbergs of the world should think differently. Facebook in democracies currently sows growing divisive effects. Future innovators need to come up with profoundly different products to connect strangers and opponents and to promote dialogue between differing opinions. When opposing partisans are able to befriend each other in cyberspace, it will be a step forward for greater peace and stability. Platforms like Facetime should be replaced by Fleshtime. Human contact and face-to-face contact need to come back as a means of communication. Hatred and vitriol are easier to cultivate in cyberspace but much harder in person.

For countries that are bitterly divided like Thailand, the best way forward is to encourage the reds to cross the media divide and listen to their opponents' views as much as the non-reds should turn to the reds' channels. Products and platforms that can bridge the divide, and narrow societal gaps should be encouraged. This is hard to achieve but it must be tried. The alternative is a dangerous polarisation that entrenches itself structurally. Emerging democracies that achieve sufficient political stability necessary for a healthy growth trajectory must have dialogue between minds that are unlike, agreeing to disagree if necessary but agreeing to take collective steps forward when possible. There is no country that cries for this kind of dialogue more than Thailand.