The future of decision-making around the region's most vital resource - the mighty Mekong River - is once again under the spotlight. 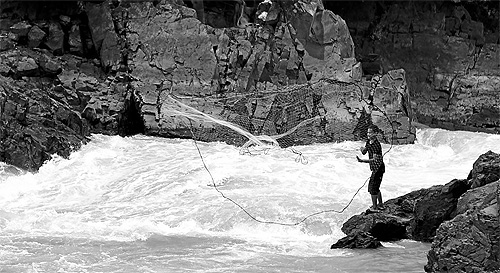 A villager casts a fishing net near the Khone Falls in southern Laos. The Don Sahong Dam will destroy the diversity of fish and the livelihoods of millions of villagers in Laos and other countries along the Mekong. KARNJANA KARNJANATAWE

The Mekong River Commission's (MRC) Joint Committee, comprised of representatives from Thailand, Laos, Vietnam and Cambodia, will hold a special meeting next week in Vientiane to discuss the controversial Don Sahong Dam, the second dam proposed on the lower Mekong mainstream. This is an important opportunity for Laos to heed calls from its neighbours in Cambodia, Vietnam and Thailand, who have requested that the decision over whether or not to build the Don Sahong Dam is made regionally, rather than unilaterally. In September, Laos attempted to simply notify the MRC and member countries of its intention to build the Don Sahong Dam, eschewing regional discussion and sidestepping its responsibility to submit the project for "prior consultation".

The consultation process allows the four Mekong countries to discuss and evaluate the impacts of the Don Sahong Dam, to seek agreement about the project's future.

Since this announcement, Thailand, Cambodia, and Vietnam have each sent official letters to the government of Laos requesting that the project undergo prior consultation.

International donors to the MRC, including Australia, the European Union, Japan and the US have also called on the government of Laos to submit the project for prior consultation.

Laos can no longer ignore the demands of its neighbours and sidestep its regional responsibility when it comes to the Don Sahong Dam.

Decisions over hydropower development on the Mekong cannot be made unilaterally, when the consequences of these decisions will be shared by the entire region. The demand for prior consultation made by Thailand, Cambodia and Vietnam requires a response from Laos and action by the MRC if there is any hope for future co-operation.

This refrain may feel all too familiar, as the spectre of the Xayaburi Dam still hangs heavy around the neck of the MRC. The Xayaburi Dam was the first project to undergo the prior consultation process. As the first real test of regional cooperation on the Mekong River, the Xayaburi Dam revealed significant weaknesses in the MRC, as Laos moved forward with construction despite a lack of agreement from neighbouring countries.

The 1995 Mekong Agreement was established in recognition that regional participation and decision-making is imperative to successfully manage one of the region's most critical shared lifelines. However, effective regional participation in decisions regarding dams on the Mekong mainstream has proved elusive and ineffective to date, leaving the fate of the Mekong in a precarious state.

Experts have warned that Don Sahong, located near the iconic Khone Falls area of southern Laos, poses a serious threat to local and regional fisheries; jeopardising the livelihoods and food security of millions.

The Don Sahong Dam would create a barrier across the Hou Sahong Channel, a critical pathway used year-round by fish migrating between Thailand, Cambodia, Laos and Vietnam. The Khone Falls area is a series of complex channels that support more than 200 species of fish, including endemic and endangered species.

The Don Sahong Dam would likely have serious impacts on many of these species' migration, feeding and breeding patterns. The project is also positioned 1km from a core habitat for the critically endangered Irrawaddy dolphins, and less than 2km upstream from the Cambodian border. Despite warnings from experts, along with the MRC Secretariat, no transboundary impact assessment has been carried out.

The Mekong is one of the world's great rivers. The lower stretch of the river supports the lives and livelihoods of more than 60 million people; providing a source of food, income, health and cultural identity.

It is an essential resource within the region. However, conflict over the complex governance of the river along with the impacts posed by the mainstream dams threaten the future of livelihoods in the lower areas of the Mekong.

With all eyes trained on Vientiane next week, the stakes are high for the future of the river, as well as the future of the MRC. If the MRC cannot stand up to Laos, it will be failing its mandate as a regional governing body, and risks losing the little credibility it has left.

Laos, too, has the opportunity to show good faith towards its neighbours by submitting the Don Sahong Dam for regional consultation; allowing more time for studies on the project's transboundary impacts, and ensuring that appropriate public consultation takes place.

Kate Ross is the Mekong Programme Associate at International Rivers, an international NGO that protects rivers and the rights of people who depend on them.