We need 'reform' but the question is how to achieve it

How did Thai politics get to this juncture? To answer this question, we need to understand the drastic changes experienced by our society in the past few decades. 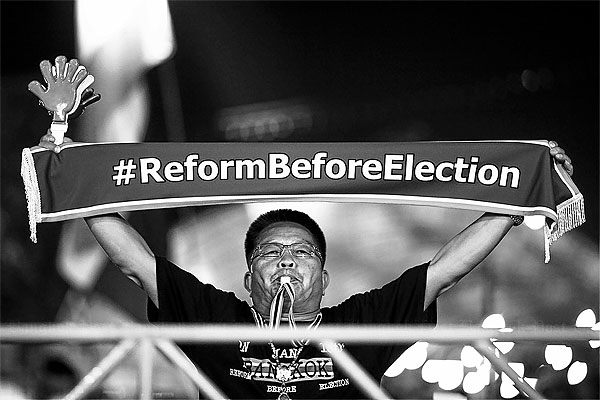 A protester holds a banner demanding reform before the election as the anti-government movement presses ahead with its Bangkok ‘shutdown’ campaign. PATIPAT JANTHONG

To start with, the country's per capita income has increased threefold during this period. In other words, people today are three times richer than their parents.

Their aspirations have therefore changed. So have their expectations from the government as well as their views on social norms. They want equality and political participation.

In the past 20 years, the many levels of elections that come with decentralisation have also empowered the citizenry, especially people in the provinces.

They have discovered how the one-man-one-vote system can change their lives for the better, how it has brought more money to their localities.

In short, they have discovered their power in the one-man-vote system.

Before 1980, only 5-10% of the national budget was allocated to the rest of the country outside Bangkok and other big cities.

By 2001, this meagre amount had risen to 16%. Since 2001, this amount has increased to 24%. One quarter of the national budget does not sound that much. But it is a big increase compared to what the provinces received in the '70s and '80s.

As payers of taxes like everybody else (especially value-added tax plus other sales taxes, which account for 50% of total tax revenue), Thais in provincial areas all over the country, who form the majority of the population, have contributed to the annual budget.

They have the right to receive a fairer share of their tax payments in the national budget.

They have begun to receive a fairer share because of changes in the political system _ from a military dictatorship to parliamentary democracy under the constitutional monarchy _ which accords each person with one vote on an equal basis.

Some city people are saying the one-man-one-vote system does not work for Thailand.

But in truth, for the majority of the people it has begun to work. Some city people say they deserve more weight than rural people because they pay taxes.

But in truth rural people pay taxes too. These city views are unacceptable by those who have been empowered by the new system.

In truth, they have learnt a lot from more education, personal experience, and new media.

They have become part of the global community, aware of universal values such as human rights, one-man-one-vote democracy, and the government's duty to serve the people, not themselves.

The political parties have lagged behind these social changes. They still do not adhere to democratic values in their operations and management. They often act like special interest groups which seek political power to benefit themselves.

Such parties were the norm until 2001. By researching people's needs at the grassroots, the Thai Rak Thai Party was the first to offer an election platform which struck a chord with the people. The party was the first-ever to win a second election in 2005 because it implemented policies like the 30-baht public healthcare programme which truly benefited people.

But the problem was that the Thai Rak Thai government was short-sighted. It paid no attention to where it would get the money to pay for more and more such policies of public benefit. It did nothing to allay experts' concerns about the possible impact of these policies on public debt.

The party had no measures to reform taxation or budgetary systems. Instead it used various financial techniques to find the money. It forced state banks to support government programmes, floated bonds, and raised money by the capitalisation of public assets. In its first term, the cost of its new programmes was not so high, and the impact on public debt was not great. But when other parties began to offer the electorate similar policies in their election promises, the Thai Rak Thai Party (and its successors) reacted by offering more and more.

Ultimately, this has triggered anxiety among many in the business world and the middle class.

Thailand's oldest political party, the Democrats, reacted slowly to this big change in politics, and as a result the party lost in several elections. When you lose so many times, you tend to believe you will lose again. And you look around for excuses.

The Democrats blame their defeats on vote-buying, not their own failure to create innovative policies with public appeal.

I am perplexed by the Democrats' poll boycott decision. A political party in a democratic system does not want to contest an election. How can this be? Australia recently went through a fierce power struggle. The Labor Party knew it would face poll defeat, so it changed the party leader.

Even though defeat was certain, it still contested the election because it was thinking ahead to a possible win at a future poll, and because it respected the rules of the political system.

Perhaps the Democrats do not really trust the process of democratic politics. The party's leaders are good at negotiating with powerful groups in society such as the military, business groups, and senior officials. They concentrate on fostering ties with groups that "matter" rather than winning support at the grassroots outside Bangkok and its southern strongholds.

I fear the Democrats' election boycott will make them even less popular, even less likely to win elections, and even more distrustful of democracy. That would be a pity.

Some Democrat politicians have tried to lobby for party reform but have failed. The party is now talking about reform of the whole political system. I agree. There are many things that need reform _ especially the judicial system, the anti-corruption machinery, taxation and budgeting, and the parties themselves. The question is how to do it.

All the important changes in our political system in recent years _ the 1997 constitution, decentralisation, anti-corruption measures, reorganisation of the civil service _ have come at times when an elected government was in power, not when parliament was suspended after a coup. Why should we believe the current situation is any different? When democracy is suspended, powerful minority interests have the field and tend to institute "reforms" that suit themselves.

I have been disappointed in this Pheu Thai government.

Many of its policies are gimmicky and ill thought-out. It has refused to listen to legitimate criticism of the over-blown rice-pledging scheme.

It abused public trust over the amnesty law.

It has not done anything about reform of taxation and the budgetary system. I sympathise with the demonstrators' frustrations.

But I cannot see how the current protest strategy will achieve reform. The aim is to create a crisis which will bring down the Yingluck government and the "Thaksin system". But what next? No amount of reform planned by this council or that is going to undo the big changes in political awareness and aspirations among the mass of Thai society. As long as there is one party that responds to those aspirations (with or without the Shinawatra clan), and another party that has not yet learnt to do so, election results are going to be much the same; and the middle-class frustrations will be the same too.

The alternative is to rig the system so drastically that those aspirations are suppressed.

Anyone who has been listening over the past few years should know people will not stand for that.

The protest strategy is a recipe for long-term turmoil.

Luckily, there are many signs of hope. The acceptance of the need for reform is now very widespread.

The attempts by the military, academics, and especially the seven business associations to act as brokers show a new maturity in Thai politics.

But crafting and implementing reform will take time. Suspending the democratic process for that long is a terrible idea, not least because it has not worked well in the recent past.

It would be better to keep the parliamentary system in place, and channel the extraordinary energy of the recent protests into ensuring reform is real.

A major part of reform should consist of measures to make political parties more democratic, more transparent and accountable, more open to representing the needs and aspirations of people in general.

Remember the words of Winston Churchill, a conservative politician in a time of enormous social change and conflict: "Democracy is the worst form of government except all those other forms that have been tried."

Pasuk Phongpaichit is emeritus professor at the faculty of economics, Chulalongkorn University.