Chalerm Yubamrung represents many undesirable things about Thai society, but he does get things done. Whether the things he gets done are desirable or not is, however, a matter of perspective.

We shall not count shutting down illegal casinos on his resume, because we know they were never meant to shut down in the first place. Pheu Thai and Chalerm had to put on a show because Chuwit Kamolvisit was being a nuisance.

Yingluck Shinawatra may be a lot of things, but she is also a high-society Thai lady. She’s not old-money high society (she’s newish) but high-society nonetheless.

We shall pause here to define high-society in Thailand as: anyone with a lot of money who likes to appear at a lot of functions and events. It has nothing to do with class, manners, culture or intellect. It’s mainly the flash and the bling. 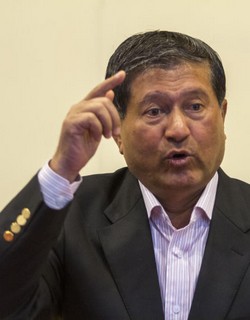 Chalerm Yubamrung ... he's back, again. Like him or not, he does get things done, says Voranai (Bangkok Post photo)

Even so, as with any high-society lady (even middle or low), she finds the likes of Chalerm and red-shirt leader Jatuporn Prompan to be in bad taste. So she sidelined these two men, much to their bitterness and chagrin.

On the other hand, red-shirt leader Nattawut Saikuar has managed to keep his portfolio in her cabinet. This is because he knows how to be tactful, and has kept his mouth shut.

Chalerm and Jatuporn do not know tact from a Tic Tac mint, and are always talking smack.

But now, some two months into the Bangkok shutdown, something has got to give. Enter Chalerm, the man who can get things done.

Consider his journey. He’s one of the last relics of Thailand’s gangland politics of the 1990s who still manage to remain very much relevant today – not behind the scenes, but up front and centre.

He’s not only a survivor, but somehow manages to come out on top time and time again.

This is the man who fled the country following the 1991 military coup, but returned in triumph, with his "unusual wealth" intact, no less. This is a type of journey his present boss also wants to emulate.

He was even at one time an adversary of Thaksin Shinawatra. But they made peace and following the 2011 election victory by the Pheu Thai Party he became the second most powerful politician in Thailand, after Yingluck.

That is, until she sidelined him to the Labour Ministry. Then followed the much publicised hospital spell. Now, he’s on the frontline again as head of the Centre for Maintaining Peace and Order (CMPO).

Chalerm’s resume speaks for itself. In 2012, the anti-government Pitak Siam group filled a stadium with over 20,000 people. Excitement and anxiety were all around, depending on which side you take.

At their next rally, tens of thousands were expected to join forces. As the head of government operations, Chalerm directed the police to blockade, bang heads, fire teargas and use water canons.

Within half-a-day, Pitak Siam called it quits and that was that. He got the job done. But today is not 2012. The People’s Democratic Reform Committee (PDRC) isn’t likely to call it quits so easily.

The verbal spats between Chalerm and Suthep Thaugsuban over the days leading to the violent clashes on Tuesday, Feb 18, were pretty much a measuring contest of the male sexual organ. It was raw, caveman-like, and of course swords would eventually cross.

Now, with one policeman and four civilians dead from the clash, and 70 people from both sides reported injured, the task ahead for Chalerm is to get things done, but with a combination of finesse and efficiency so that the military won’t move in on the side of the protesters.

But if he doesn’t proceed carefully, he might end up fleeing into self exile once again. It’s going to take a lot of doing by Chalerm to pull this off in the streets, and for his boss to pacify the military from behind the scenes.

Indeed, things had become a bit boring over the past weeks. Now, with Chalerm versus Suthep heading the event list, grab a seat and breakout the popcorn.

But also say a prayer for the "collateral damage" and the casualties of war.

Hong Kongers renewed their British National (Overseas) passports or applied for the travel document in record numbers in 2019 when the city was rocked by months of anti-government protests, marking an eightfold increase over all applications in 2018.

Robber makes off with gold ornaments worth B4m

A man robbed a gold shop inside the Wang Hin branch of Tesco-Lotus in Lat Phrao district of Bangkok on Sunday and escaped with gold ornaments worth an estimated 4 million baht.