As caretaker Prime Minister Yingluck Shinawatra comes under mounting pressure from the gathering forces arrayed against her self-exiled and convicted brother, former prime minister Thaksin Shinawatra, something will soon have to give. Thailand’s prolonged political standoff has crippled Bangkok’s central business district and placed Thailand in an economic free fall. At issue going forward is how much longer Ms Yingluck will last, how she is dislodged, what comes after, and whether a grand realignment takes place to marginalise Thaksin and move Thailand beyond him. 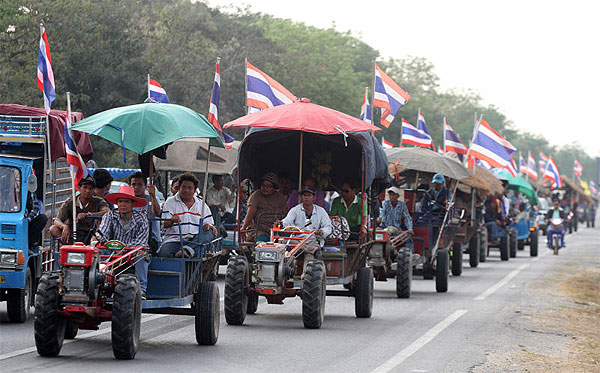 About 2,000 rice farmers travelling on 500 e-tan farm vehicles head for the capital. A grand realignment and a way out of the political polarisation is possible if farmers’ plight becomes part of the anti-government movement’s agenda. THANARAK KHOONTON

The latest judicial ruling by the civil court to uphold the emergency decree while prohibiting the government from using force to disperse protesters under the People’s Democratic Reform Committee who have occupied parts of central Bangkok was unsurprising. It fell in line with other decisions by the Constitution Court that have been more supportive of the PDRC than the Yingluck government, including the rejection of arrest warrants against protest leaders.

It was also consistent with the Election Commission’s ambivalence and foot-dragging on holding and completing the inconclusive polls. Other decisions critical of government performance by other watchdog agencies, such as the National Anti-Corruption Commission and the National Human Rights Commission, have gone in the same direction.

Ms Yingluck is a lame duck unless her caretaker administration can retake the offensive and start to look and feel like a functioning government again. It has thus far failed to do so, unable to disburse budget funds, initiate policy directions, and reclaim occupied areas of Bangkok. Its amnesty blunder to bring Thaksin back to Thailand has been compounded by the rice-pledging fiasco whereby farmers are left unpaid by the government after handing over their crops.

Indeed, Ms Yingluck is now a sitting duck. Her time in office is untenable as Bangkok’s blockades and Thailand’s economic descent become unbearable. Yet she is unlikely to resign, as the PDRC has demanded, unless the Shinawatra clan is assured of acceptable terms. As weeks extend into months, however, a decision by watchdog agencies to see the back of her may be in the offing if she chooses to cling to office.

The writing is on the wall, and a déjà vu from 2008, when two proxy governments of Thaksin were ejected from office, suggests a similar fate for the caretaker Yingluck government. The longer this process takes, the more damaging it will be for the Thai economy. But the hastier this process becomes, the more long-term risks Thailand will face. Perhaps this is the reason the watchdog agencies are taking more time to go through due process, unlike their predecessors in 2008 who rushed and rammed through the process and appeared compromised and partisan as a result.

How Ms Yingluck goes is also crucial. If she is ousted without relatively persuasive legal and constitutional basis, the risk of a post-Yingluck backlash from upcountry red-shirt supporters of the Thaksin camp will heighten. Thus, a decent interval is needed for due process, even at a cost to Thailand’s reputation and economy, and a sufficiently reasoned ouster on legal and constitutional grounds is equally important.

Analysing Ms Yingluck’s political longevity and how it is likely to be upended does not condone the process. Thailand is now in a familiar conundrum. Another elected government from Thaksin’s power bases, haunted by corruption allegations and hounded by critical policy missteps, is being overthrown not in parliament, but in the streets and in the corridors of the judiciary and other watchdog agencies. The last time this happened, in December 2008, it begot the red-shirt demonstrators because Thaksin manipulated them and because they were effectively disenfranchised.

This time must be different. If Ms Yingluck is deposed in a similar fashion, the caretaker government that comes after her must be inclusive. Thailand does not lack human talent but it must come up with a broad-based, multi-partisan government that features not only Thaksin’s opponents but also includes some of the more palatable members of the Thaksin side. Otherwise another partisan government, as was the case from December 2008 to July 2011, would be a recipe for more confrontation and mayhem. We have seen the power plays in 2008 leading to violent pushback in 2009-10. Let’s not go there again.

One way ahead is to narrow the divide and capitalise on the cracks that have emerged among Thaksin’s power bases. His amnesty bid, undertaken by the Yingluck government, has left a sense of betrayal across broad sections of the red shirts who may now be in disarray after seeing that Thaksin is all about himself, his clan and cronies, not them and never Thailand. Thaksin can defy and face off against his opponents time and again but he is electorally vulnerable if his key constituents are up in arms against him.

The rice-pledging corruption and incompetence have outraged farmers and undermined the perceived Thaksin policy magic. His populist platform is the driving linchpin of his resilience and longevity. But now the policy initiatives under Ms Yingluck have sputtered and are heading towards wreckage. The rice scheme, in particular, has opened the eyes of PDRC protesters and all sorts of anti-Thaksin groups to the plight of the farm sector.

Commodity prices are chronically unstable, and farming livelihoods are constantly beset with indebtedness. It is poignant to see the outpouring of sympathy for farmers from myriad rank-and-file PDRC supporters in their street rallies and in social media. If this budding empathy is broadened and sustained, it could reach out to not just the farming sector but many other upcountry citizens who have toiled under Thaksin’s shadow for lack of a better alternative.

Such a grand realignment is premised on respecting and accepting rural voices into the mainstream fold that is dominated by and centred in Bangkok. This overdue embrace between Thaksin’s opponents and his support bases mainly from the North and Northeast can marginalise him and profoundly move Thailand beyond its visceral polarisation.

On the other hand, continued alienation of Thaksin’s rural supporters would generate the opposite outcome. If they are not recognised and accepted, the pro-Thaksin red shirts will have nowhere to go but back to Thaksin and his Pheu Thai Party.