Fascism is synonymous with "evil". Fascism is generally condemned for its manipulation of people's thoughts to focus on permanent warfare against imagined internal and external enemies to create a militarised atmosphere in which ethnic minorities can "disappear", freedom of the media comes under threat, and poets are murdered. 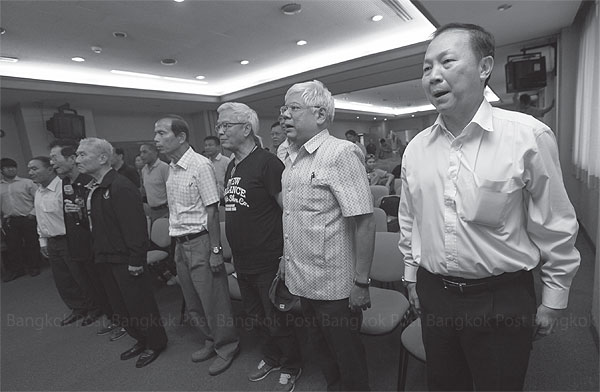 Maj Gen Dr Rienthong Nanna, right, leader of the Rubbish Collection Organisation with a group of retired soldiers who vow to support his online campaign against perpetrators of the lese majeste law. SEKSAN ROJJANAMETAKUL

There is a school of thought that sees the use of fascism as restricted to a definite place and time. There is another opinion, promoted by philosopher Umberto Eco, that the basic characteristics of fascism are always with us, permanently posing a threat, in what he termed Ur-Fascism.

After all, the slogan "Fuhrer befiehl, wir folgen dir!" (Fuhrer command, we will follow) does sound like the slogan "Thaksin thinks, Pheu Thai acts". And it does, unquestioningly, subjugate the collective will to the leader (or nai yai — big boss). Also, the paramilitary training and name of the Democracy Protection Volunteers Group echoes the origins of the original Italian Blackshirts, or "Voluntary Militia for National Security".

But something more insidious is arising: The ultra-royalist defence of lese majeste, championed by Maj Gen Rienthong Nanna and his Rubbish Collection Organisation (RCO), which appeared on Facebook on April 16 and now has more than 150,000 followers.

The RCO has already been warned by Human Rights Watch for its dehumanising language, such as use of the word "trash". The group intends to use social methods such as infiltration. Moreover, it has a hunting plan and offers a cash bounty to those who can provide credible cases to pursue legal action against.

It is also relevant that lese majeste carries a prison sentence in Thailand and does not distinguish between slander/libel, constructive criticism and republicanism.

Is this Thai fascism rising? The slogan of the RCO translates as "completely eradicate lese majeste offenders". "Eradicate" is the same Thai word used for Thailand's "eradicating communism" slogans. The group argues, however, it means only legal action and social sanctions against anti-monarchists.

But still, I wanted to consult experts on hate speech, and this is what Rabbi Cooper of the Simon Wiesenthal Centre had to say about the RCO's language: "Such language has no place in democracies where people can have polar opposite views without dehumanising the 'other'."

Eradicating communism in Thailand was associated with an "assimilate or leave" programme targetting Chinese immigrants (who were compared to the Jews). But it is also associated with the rise of militias, such as the Red Gaur, active during the 1970s and partly responsible for the Oct 6, 1976 Thammasat University massacre.

Is there a need for such ultra-royalism and ultra-nationalism at this time? The answer is no. If there were an organised anti-monarchical plot, the military and judiciary would already be investigating it.

The vast majority of Thais grow up with the monarchy everywhere in their lives: In their homes, schools, municipal offices and workplaces. Perhaps the education system or parents are not teaching enough royalism? Or maybe they are, and actually something is awry with the state. Is this concern about the need to create an enemy within?

During World War II, Thailand became a satellite of the Japanese empire and had its own brand of fascism, revolving around Field Marshall Pibulsonggram's Cultural Mandates, introduced from 1939 to 1942 — which are  still powerful in the Thai psyche.

His mandates renamed the country as "Thailand", creating a mood of xenophobia, and insisted that all its inhabitants are one people. They coincide with Umberto Eco's characteristics of fascism — appeal against intruders and promotion of racism, obsession with a foreign plot, and promotion of xenophobia to unite  the country in nationalism. So do the cultural mandates on traditionalism, Thailand's national anthem, and the importance of race and territory.

Fascism might be a phase that a country goes through, but sadly it leaves an indelible mark after several years of implementation.

Can we see Thai fascism in the Rubbish Collection Organisation?

The RCO leader has compared his followers to a "Van Helsing Division", and anti-semitism has used the same "demonisation" of its victims. The RCO is also promoting its followers as heroes — as well as creating a sense of permanent warfare — an element in fascism. Incidentally, both characteristics are also noticeable in red shirt rhetoric.

The RCO's leader has also emerged from the PDRC which operates on the subjugation of the common will and the people to a leader. Yet again, the opposite side is using a similar technique.

According to philosopher Eco, "because of its qualitative populism, Ur-Fascism must be against 'rotten' parliamentary governments". He also noted that the so-called Ur-Fascism attempts to exploit a "frustrated middle class".

But is this justified in any kind of battle against Thaksin Shinawatra? There is a view that Thaksin is a megalomaniac who is prepared to divide the country if he cannot have it, but evidence suggests he actually seems to be following the normal "winner takes all" election approach. Many believe the 40% corruption rate is his incentive.

Maybe there is a simpler problem here because it is more than a few people that keep voting for the party that is not the semi-official royalist party. Maybe, instead of more ultra-nationalism, there is a need to teach what "free and fair elections" and "parliamentary democracy" actually mean.

The first step would be inviting foreign election monitors. Election monitoring organisations are normally from democratic countries and provide educational information on why monitoring and electoral integrity is important to a democracy.

The second step is removing the conditions which permit a "parliamentary dictatorship" or "policy corruption". Again, this may require bringing in external auditors from trustworthy international consultancies, ones who cannot afford to take a hit to their reputation by being involved in a major scandal, to audit parliamentary processes and policy implementation.

Both Pheu Thai and the Democrats seem willing to take the first step. Will Thailand's middle ground be able to persuade them to put away the fascism-based xenophobia, take the second step and show that they understand that ultra-nationalism is not the issue, but political integrity is?

John Draper is an academic and political commentator.