I am sitting here in my prison cell late at night. The lights are on, the other prisoners are asleep and I sit alone hunched up against the wall. I am thinking of the times before my incarceration when I would be composing articles for the magazine, Voice of Taksin, at this time of night. I was the editor and publisher of this bi-weekly magazine. The work was exhausting but very rewarding as 30,000 copies would be printed and sold. Its publication was much anticipated by its readers and would be the focus for political discussion and comment. Some of the articles were incendiary because they were considered to be defamatory to the Thai monarchy by the Thai media and conservative political elite. 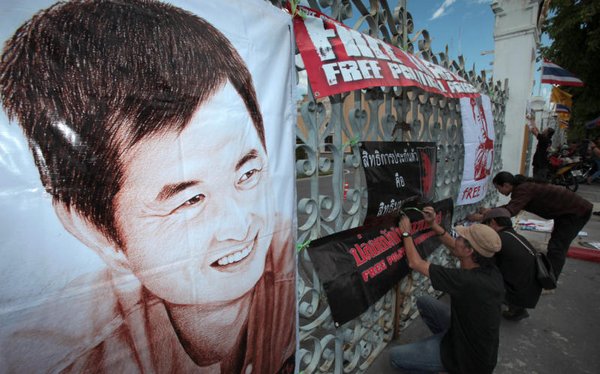 Red-shirt supporters put up posters at the gates of Government House last May 1 calling for the release of "political prisoner" Somyot Pruksakasemsuk. (Photo by Chanat Katanyu)

These accusations served to increase the standing and reputation of the magazine because it was responding to the needs of its readership, who were fighting for political freedom and democracy at the time.

Between 1992 and 2005, I was an advocate for improving labour conditions in lower central Thailand. I was very aware of the hardship, suffering and despair of the workers in industry and their exploitation by their employers. These egregious conditions came about as the result of rampant and unchecked industrial growth in the pursuit of greater profits. This led to a massive increase in the income gap between rich and poor. I spent a lot of time and effort fighting to improve the conditions, pay rights and dignity of the workers. After many years of struggle, conditions and pay have improved but are still not up to an international standard.

In 2008, I was invited to be a key participant of the nascent red-shirt movement, also known as the United Front for Democracy against Dictatorship (UDD), in the north of Thailand. At that time the attendance at red-shirt rallies was very low but increased when Abhisit Vejjajiva, leader of the Democrat Party, formed a new government in 2008. The Democrat Party represented the yellow-shirt movement who were very conservative pro-monarchist.

Despite the low attendance we persevered with our efforts which culminated in a large rally of more than 10,000 people in September 2010 in Chiang Mai, demanding the release of UDD political prisoners who had been incarcerated as a result of the red-shirt rallies in Bangkok and the subsequent crackdown to end the rallies. 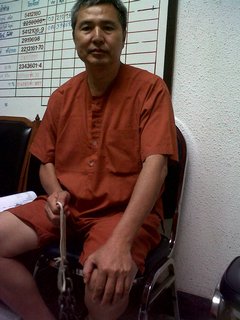 Mr Somyot, photographed during a bail hearing in 2011. He has been denied bail 16 times.

In 2009, there was no red-shirt movement in the southern provinces of Thailand. At this time I was invited to a memorial ceremony for the Red Tank Tragedy in Phatthalung province. The Red Tank Tragedy happened in the mid 1970s when the Thai military cracked down violently on communist activities in the South and executed their victims by throwing them out of helicopters or burning them alive in tar barrels. I took this opportunity to start a red-shirt movement there and visited many times. Because of my efforts the red shirts eventually held an education seminar which was attended by more than 1,000 people.

The red-shirt movement was firmly established by 2008 in Isan, in the Northeast of Thailand. Isan is the poorest region in Thailand and is the power base of the Pheu Thai Party, which represents the red-shirt movement in government. In 2009, I was invited to participate in red-shirt political activities there. I also participated in rallies and seminars in central and eastern Thailand. The participants at these rallies were from all backgrounds and anybody could attend regardless of their position in society. They were motivated by the desire to improve Thai society and government for all citizens and not just the elite.

I am not a leader or politician. I am not good at making speeches, nor am I well known. However, I am very concerned about injustice in Thai society and the need for reform. Hence, I want to participate in the red-shirt political movement to promote democracy, equality, freedom and justice. The supreme power belongs to all the people of Thailand. This is also why I edited and published Voice of Taksin magazine, which was an important media outlet for the red-shirt movement. I was charged with breach of the lese majeste law and subsequently arrested in April 2011. This was after I publicly petitioned to amend this law which contradicts the International Convention on Human Rights to which Thailand is a signatory party. I was not notified of the charges or the issuance of the arrest warrant.

I have unsuccessfully applied for bail 15 times. Bail is often granted to those who have been convicted of worse crimes and sentenced to death. The years it takes to fight a case from the Court of First Instance to the Supreme Court are debilitating without bail. As a convict, the environment is very crowded and disease is rife, all of which adds insult to injury as I continue to fight my case awaiting final adjudication. I cannot use any of the privileges extended to convicts such as educational programmes.

I am also barred from any amnesty or parole because time served prior to final judgement is not counted in the Thai judicial system. I could receive a royal pardon if I admitted my guilt and implicated another person in my supposed crime. This I cannot accept because it is against my moral principles.

As far as I am concerned lese majeste should not be a statute of law and therefore I am not guilty. So if I were to accept a royal pardon for freedom, I would still be a prisoner of my conscience. I choose to suffer in order to fight injustice and malpractice despite the fact that I will eventually be found guilty or die beforehand.

Looking at the sky from my cell the moon is dim and there are no stars. I am thinking of my family. It is now three years since we were separated. My children have been at university in the meantime, which I am proud of given my circumstances. The sky is dark like the moral darkness of Thai society. A bright morning will hopefully rise.

Somyot Pruksakasemsuk is a former labour activist and ex-editor of Voice of Taksin magazine. Tomorrow, he will have been detained without bail for three years.