Crime and punishment of Somyot
Opinion

Crime and punishment of Somyot

I don’t much care for Somyot Prueksakasemsuk's politics, although his strong conviction to them is admirable. I respect his idealism, but his allegiance leaves much to be desired.

Whether lese majeste ought to be a crime is one issue. But as long as it is the law, we should consider if the punishment is excessive.

In his letter published in the Bangkok Post on Tuesday, convicted lese majeste offender Somyot wrote that he would not accept a royal pardon even if it were offered. He’s serving a 10-year sentence and is in the appeal process. 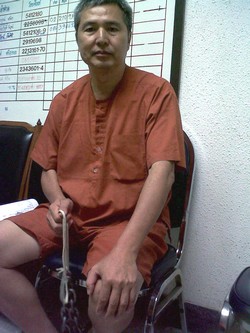 Somyot argued that lese majeste should not be a statute law, therefore accepting a pardon would mean that he admits guilt and recognizes the legitimacy of the law.

This he refuses to do. He said he’s a prisoner of conscience. Agree or disagree with his politics, this takes courage and conviction.

Somyot wrote that he joined the United Front for Democracy against Dictatorship (UDD) to fight for democracy, equality, freedom and justice. Such idealism should also be respected. All those four ideals are quite lacking in Thailand, under any government.

But perhaps joining the red-shirts, an offshoot of the Pheu Thai Party which operates on behalf of Thaksin Shinawatra, isn’t the best way to go about fighting for democracy, equality, freedom and justice. Although, to be truthful, what are the choices out there?

It is similar to those supporters of the People’s Democratic Reform Committee (PDRC) who confess that they are no fan of Suthep Thaugsuban or the Democrat Party. But what are the other choices are out there in their fight for King and country and good governance?

Somyot is a former labour activist. That in and of itself should be applauded. He’s also a former editor of the magazine Voice of Taksin. This poses questions.

The magazine uses the spelling of the name of the former king, while representing the fugitive former prime minister. Thaksin was a democratically elected leader wrongly ousted by a military coup d'etat.

However Thaksin's track record of human rights abuse and interference with freedom of speech does not speak much for democracy. He’s the patriarch of a large and powerful patronage network, and has himself has been accused of using the lese majeste law to benefit his own political agenda.

Such allegiance should pose a dilemma for someone claiming to fight for democracy, equality, freedom and justice. But again, a common enemy makes for convenient allies. Just ask Chiang Kai Shek and Mao Tse Dung.

One may agree or disagree with his politics and/or his allegiance. One may even support the lese majeste law. But none of us should fail to recognise Somyot’s rights as a citizen of this country and as a human being.

A 10-year prison term for a crime of free speech in a country claiming to be (or wanting to be) a democracy, with the King as the head of state -- the very same King who has been critical of the lese majeste law and who has told the nation that he is open to criticism.

The above paragraph simply doesn’t add up.

To the PDRC and the Democrat Party, whose aim is to achieve ‘’true democracy under the monarchy’’ -- is this crime and punishment considered justice, in accordance with the values of democracy, freedom and human rights? Is this the wish of the King?

To Yingluck Shinawatra and the Pheu Thai Party, including Thaksin, if the red-shirts have fought, and are still fighting, on your behalf, with the aim of achieving "democracy, equality, freedom and justice" --- what have you done over the past three years in government to reform the lese majeste law or to help lese majeste prisoners?

PARIS - The discovery of dozens of beakers and bowls in a mummification workshop has helped reveal how ancient Egyptians embalmed their dead, with some "surprising" ingredients imported from as far as Southeast Asia, a study said Wednesday.