The clock is ticking to find a last-minute solution to Thailand’s escalating conflict. A solution will not come from the extremists on both sides. Instead, it will have to be the moderates who reach across the aisle to find a resolution. 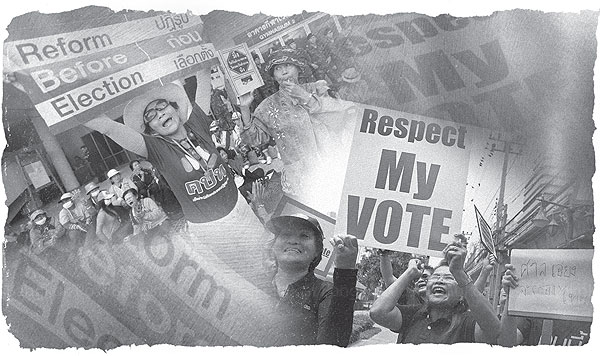 As the political conflict continues, the public has become a crucial factor in working out a sustainable resolution. For that to happen, broad public support is required.

Abhisit Vejjajiva’s courageous attempt to break the impasse and Yingluck Shinawatra’s embrace of his efforts need to be commended. Given the general belligerent mood, any move to break rank carries huge political risk. Many doubt whether the proposed solution will be within the limits of the constitution.

Positions on the whos, whats and whens may be too far apart to strike a deal. Nonetheless, seeking a minimal consensus between all stakeholders is the best way to defuse the current stand-off.

In the long run, this deal between elites may even pave the way for the social compromise between the classes that is needed to resolve the underlying conflict.

Nevertheless, the rules of the game have changed and the general public is no longer prepared to simply accept backroom brokered deals between elites. As the tactical blunders of both sides have shown, the public has become a crucial factor. Hence, any sustainable resolution to the conflict needs popular support. This highlights why an elite-based deal is necessary but also an insufficient way to end this crisis.

To unfreeze the political system, the deadlock between the conflicting camps has to be broken. In fact, their positions are not too far apart. One side wants a "clean government" and the other calls for a "responsive government".

There must surely be a way to combine the two? However, between the two battle cries "reform before elections" and "reforms are undemocratic", there is very little room for compromise.

In other words, the key to resolving the deadlock is not only substance, but perceptions. What is needed is a bridge between identities and values, beliefs and emotions, worldviews and ideals. A new vision for a common future which encourages all sides to come together is needed.

In order to do that, we have to understand how this awkward opposition between "reforms" and "elections" came into being in the first place. A good starting point is corruption, which has been the focal point of the political conflict.

There is a consensus that endemic corruption hurts political and economic development. Every Thai has a personal story to tell about corruption. Interestingly, there are radically different perceptions of what corruption actually is.

This matters a great deal, because the way in which corruption is understood largely determines what kind of solutions a speaker has in mind. Those who fear corruption as moral decay will seek to strengthen morality. Those who blame it on “bad people” will aim to “exterminate” this “rubbish”. Those who identify it as a problem of governance will install new laws and institutions, and those who see it as the decay of the ancient regime will strive to overcome it.

Different worldviews on corruption play a central role in the construction of the red/yellow-shirt conflict. Corruption narratives explain in a nutshell what all this turmoil is about. They empower actors, and limit the room to manoeuvre for others.

Corruption narratives are crucial parts of the platforms on which the heterogeneous yellow and red discourse alliances can come together. "Saving the nation from moral corruption" is what royalists and former communists, military men and workers, southern farmers and Bangkok’s middle class can agree on, despite all their differences. Whereas "overcoming a corrupt and unjust system" is the battle cry for the red alliance between capitalist tycoons and the poor, academics and taxi drivers, rural farmers and Bangkok’s cosmopolitan bohème.

Corruption narratives are also the key to understanding the rage of Bangkok’s middle class. To oversimplify, many fear that "corrupt politicians take our tax money to bribe the greedy poor to vote for them", consequently "bankrupting the state with populism". Middle-class anger is fueled by the "vulgar corruption and nepotism of political mafias”.

These narratives point directly to the origin of the false dichotomy between "reforms" and "elections". In order to win elections with the support of the rural vote, political entrepreneurs forged alliances with local power-brokers. Once elected, local politicians tend to bring the feudalistic logic of the province into national politics. Seen from the perspective of the middle class, patrons distributing spoils into their personal networks is degeneration back to "primitive times" thought to be long gone. The solution is then clear: To suspend the mechanism which allows the rule of the "corrupt provinces" over the "decent capital" — elections. Consequently many of the "reforms" of the past decade were aimed at curbing the influence of elected politicians by checking them with "neutral" institutions. In its seminal ruling on the Senate amendment, the Constitutional Court embraced the same narrative to equate elections with nepotism.

The problem with this approach is that it does not curb corruption. On the contrary, reaffirming "traditional morality" means strengthening the exact same patronage system which functions by distributing spoils into personal networks. What is needed is the opposite: A modern political system with impersonal, merit-based institutions. The best way to curb corruption is to help people defend their rights and interests against the powerful. In other words, not less, but more democracy is the most successful way to fight against corruption.

Naturally, those who benefit from the status quo will resist institutional limits and controls to their power. This is why the fight against corruption cannot be neutral. Therefore, corruption fighters need to forge an alliance with those who seek deeper democratisation and social justice.

Marc Saxer is resident director of the Friedrich-Ebert-Stiftung Thailand office.

António Guterres does not deserve a second term