Hell is coming, and he rides on a fiery red horse. At least that’s what Chalerm Yubamrung is promising. Maybe.

If the People’s Democratic Reform Committee (PDRC) refuses to respect the people’s vote, then don’t expect the United Front for Democracy against Dictatorship (UDD) to respect the court’s decision.

After all, respect given is respect earned and hopefully respect returned.

On Wednesday, the Constitutional Court unanimously removed Prime Minister Yingluck Shinawatra from office, and nine of her cabinet ministers, because the transfer of Naitonal Security Council (NSC) chief Thawil Pliensri was illegal.

But yesterday’s guilty verdict was delivered based upon the illegal transfer of one civil servant. The punishment does not fit the crime. But it does fit into the hand of Suthep Thaugsuban and the PDRC.

The goal for the PDRC is to "eradicate" the so-called Thaksin Shinawatra regime from Thailand. The removal of his sister and nine cabinet ministers is a step in that direction. 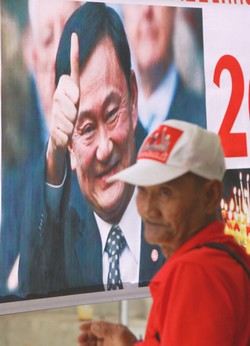 Action begets reaction. Now, the ball is in the court of Thaksin. Then there are the 15 million Pheu Thai voters to consider, and the UDD to reckon with.

The threat issued by Chalerm would mean a legion of red-shirts descending upon Bangkok. This could trigger a chain of reactions. Two possible scenarios could occur.

The first scenario is the PDRC could successfully persuade the military to put down the red-shirts, thereby using force to defeat those supporters of Thaksin.

But if the military cannot be persuaded. Or if there’s division in the military's ranks. Then physical confrontation between the two sides could at its worst lead to a civil war.

For this scenario to occur, Thaksin would have to have decided to go for broke, fight to the bitter end.

The second scenario would have the red-shirts threatening, but it wouldn’t amount to an actual confrontation.

This would be because Thaksin had accepted the judgement as a sign that he cannot win, and thus sit down to work out a compromise that would likely lead to the Shinawatra family bowing out of politics altogether.

For the UDD to become a factor, they would need financial support. This is not in the vein of vote buying, Simply, the logistics and resources needed to organise a mass demonstration and to sustain it requires a large amount of money.

Action begets reaction. It is up to Thaksin how he will play the game next. Hell could very well be coming,  as Chalerm has promised. But Thaksin is the one who will decide whether or not to unleash hell.

Perhaps he still has other cards to play.

The NACC's ruling today will also play into how Thaksin will react.