Another one bites the dust, so the great Queen song goes. With the Constitutional Court’s dismissal of Yingluck Shinawatra as caretaker prime ministers on Wednesday, Thailand has witnessed three pro-Thaksin prime ministers dust-bitten in six years, courtesy of judicial interventions. The very moment she was dismissed, the Pheu Thai Party promoted to prime minister Niwatthamrong Bunsongphaisan — a close associate of Thaksin Shinawatra — almost as if to line him up for the firing squad. 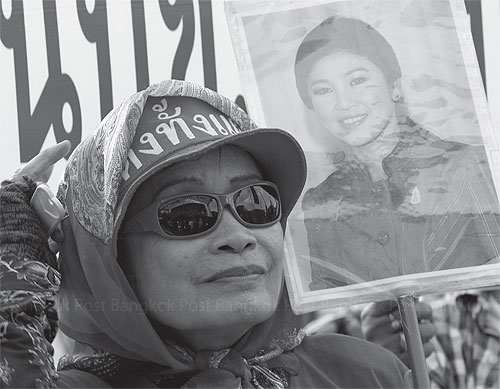 Arguing against the Constitutional Court, a red-shirt protester holds a placard to support former prime minister Yingluck Shinawatra and the Pheu Thai administration at a rally to counter the anti-government movement’s call for an interim premier. Apichart Jinakul

On cue, intellectuals behind the anti-government movement, the People’s Democratic Reform Committee (PDRC), announced that Mr Niwatthamrong could not be caretaker prime minister but only a deputy prime minister acting as a caretaker prime minister. This tendentious argument was meant to demonstrate that a political vacuum existed allowing for the creation of an interim government and a so-called People’s Council. May well the anti-Thaksin camp be singing Queen’s chorus line: “Hey I’m gonna get you too. Another one bites the dust”.

The dismissal of Ms Yingluck by the Constitutional Court is part of a conspiracy according to pro-government supporters. It is not. She knowingly transferred the head of the National Security Council, enabling her government to then transfer the sitting national police chief into the post, which then allowed Thaksin’s former brother-in-law to occupy the vacant post of national police chief. Nor is it right to call a conspiracy the indictment of Ms Yingluck on Thursday by the National Anti-Corruption Commission for negligence in regard to the failed rice subsidy scheme, about which warning signs were plenty. The indictment might prove to be wrong, but it is not a conspiracy.

There is no conspiracy in these judgments; they are faithful to the 2007 constitution that aimed to keep at bay the Shinawatra clan. It also buttressed a reactive alliance between the post-2006 revived military-bureaucratic establishment and the political class around the hybrid liberal-conservative Democrat Party against Thaksin. It didn’t work. Under the 2007 constitution pro-Thaksin parties won two elections (2007, 2011) only to be robbed of the 2014 February election by the Constitutional Court’s nullifying of the poll. That ruling made sense in the face of the PDRC’s vandalising blockades of the ballot.

There is no conspiracy because the independent agencies of state, including the Constitutional Court, the Election Commission and others function according to the 2007 constitution project. This included strengthening the hand of the judiciary and bureaucracy in the functioning of the independent agencies and the Senate,
and peopling them with anti-Thaksin
forces. With such instrumentalities the hope was that the demands of the Thaksin-aligned political class and its electoral base could be controlled — no conspiracy in the real meaning of the word is required, because these agencies are functioning to script.

This is not to say that the judgments are necessarily legitimate. The 2007 Constitution won quasi-legitimacy by a bare majority in a national referendum under the restrictive conditions of a military junta. Its real birth lay in the illegal seizure of power in the 2006 coup: an act forbidden in the criminal code and an act which was absolved, in time-honoured fashion, by the military junta in its interim constitution following the coup. Given their coup-dependency, the rule of law discourse in Thailand claimed by the anti-government elites as part a primary motivator against the caretaker government has a whiff of hypocrisy.

It also has an air of desperation. During the 1990s when a liberal conservative pact was formed and found expression in the 1997 constitution, the Democrat Party and civil society broadly did little to win the nation to new norms of political order that would have protected them against Thaksin’s electoral authoritarianism during the first half of the 2000s. Thaksin won the electoral argument by action and effective policy and party machine, and some monetary lubrication. But as a result of dictatorial shortcuts and manipulations by those who oppose him he has now emerged in many people’s eyes as at least an electocrat, if not a democrat.

There was hope that with appropriate groundwork Thaksin could return from exile. And so very deliberately, when the Yingluck government attempted constitutional reform late last year, it twinned-in-time that higher purpose of reform with a general amnesty that would have enabled a Thaksin return. And this brought out the gremlins — the political peace of her first two years of office fell apart.

Former secretary-general of the Democrat Party, Suthep Thaugsuban, and other high profile Democrats quit as party notables to take the fight to the streets and were then followed by Democrat Party MPs resigning en masse from parliament in December last year. The die was cast. Thailand’s oldest party with a sometimes honourable history of fighting dictatorship and promoting liberal forms of democracy, transformed itself into a street fighting outfit robbing the country of a chance of political compromise because it chose not to be a strong parliamentary opposition. And so the 2007 transparent political project, not a conspiracy, continues.

If there is no conspiracy there are certainly “double standards” in the various court cases pursued, and in the outcomes achieved. However, the charge of double-standards stands across the political divide because this is a tendency in both
camps, evidenced by the way the instrumentalities under their respective control function.

The double standards — in play no matter who is in office — reflect an apparent intractability at two levels: first, between the rival elites who want to hold power, and second the political visions they espouse, and upon which they have attracted a mass base. The intractability, bad as it is, is also entangled in anxieties surrounding the issue of royal succession.

This weekend significant numbers of protesters from both sides are on the streets. The PDRC is seeking defection by state officials to its side and an interim government. Its occupation of television stations seeks to broadcast this intent. The United Front for Democracy against Dictatorship (UDD) will be pushing for a July election and for the caretaker government to remain in office.

There is no chance of the former, some for the latter.

Since the 2006 coup Thailand has lacked a workable political settlement and as each side has manoeuvred for advantage, violence and hate have intensified. Talk of civil war used to be rhetoric, it is now a possibility. The strategic arms in both sides’ armory is narrowing — and it may come down to going for broke, inviting military intervention.

However, the proposals from both sides do not address the intractable nature of the conflict. An election right now seems like an invitation to hell. An election is not a forum to decide fundamental antagonisms on the nature of power. There is no point in the Pheu Thai caretaker administration seeking another democratic mandate. Indeed, winning elections in Thailand appears to be a case of diminishing returns.

The better option is to begin a national political reform process. But this can only begin on the basis of respecting the historic democratic will of the current caretaker government’s constituency, across several elections. To ignore this is also an invitation to hell. Reform processes cannot disenfranchise a majority. But this is not about proportionality.

A genuine constituent assembly, for that is what is needed, should form a democratic will, not a partisan one. This would require that extremist elements of the PDRC be abandoned, and the clinging to power of the old establishment should give way to the aspirations that were embedded in the 1997 constitution. But it also requires of the pro-Thaksin camp a real choice — to embrace democratic reform through a process that it has genuine stakes in and to commit to new modes of politics and accountability that all must be subject to. It cannot seek to present itself as a democratic force and not acknowledge the authoritarian drift of the pre-coup Thaksin administrations.

Michael Connors teaches at the University of Nottingham, Malaysia campus. He is the author of “Democracy and National Identity in Thailand” (NIAS Press, 2007).