Losing our sanity in the political abyss
Opinion

Losing our sanity in the political abyss

The political chaos made me rush to check my Oxford Learners’ Dictionary for the meaning of "sanity" (the state of having a normal healthy mind; and the state of being sensible and reasonable). It is something that is currently hard to find in our society as warring parties try to justify their own unbending aims. Those holding the middle ground will be automatically dubbed “un-Thai”, disloyal, or hired/paid by the other side. 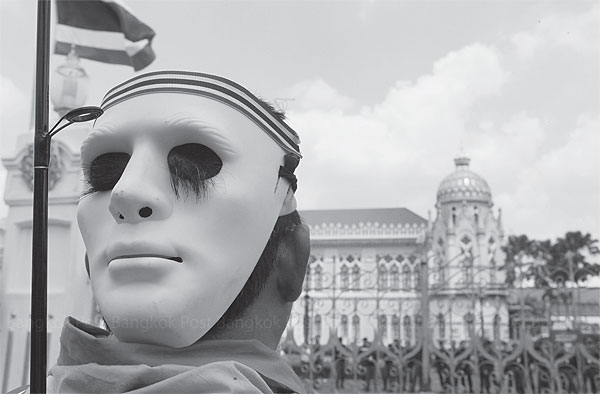 Insanity has seemed prevalent within Thai politics over the past decade: people have become less restrained and less tolerant, as they seek to retaliate, humiliate and dehumanise the other side.

It must be why there are so many bizarre things going on. For example, policemen guarding the premises of the Centre for the Administration of Peace and Order (Capo), who fired tear gas against an intruding mob led by Luang Pu Buddha Isara, had to apologise to the monk for doing their job.

When the monk’s security guards seriously assaulted a colonel who was simply moving traffic cones that were blocking his route home, the monk simply sent money to the mother of the injured man. He made an apology later but the act was apparently damage control against public outcry regarding violence perpetrated by his people.

Isn’t it ironic that the Yingluck government clung fiercely to the coup-sponsored 2007 constitution for its own survival — despite persistent attempts to amend it — while the alliance of those who drafted, enacted and expedited this charter now wants to ignore the supreme law by inviting military intervention to ensure a non-elected prime minister replaces the Pheu Thai Party politicians who seem unbeatable at the polls.

While the Sept 19, 2006 coup was able to purge the country of populist political tycoon Thaksin Shinawatra, the coup-installed Surayud government could not uproot the loyalty of millions of grassroots and lower middle-class people throughout the nation who still see him as their hero.

Despite the success of the conservative military and royalist alliance in promulgating the 2007 constitution that reduces the power of elected bodies (by installing 40 appointed senators against 60 elected ones), the first post-coup election in December 2007 did not give the anti-Thaksin Democrat Party a chance to carry on the torch of the coup-sponsored administration.

In 2008, the Constitutional Court subsequently stepped in to get rid of two elected pro-Thaksin governments. Samak Sundaravej was ousted for hosting a cooking show while being prime minister and Thaksin’s brother-in-law Somchai Wongsawat for electoral fraud. Mr Somchai's Thaksin-affiliated party was also dissolved while he and MPs in his camp were banned for five years.

Just last Wednesday this very same court terminated the premiership of Thaksin’s sister Yingluck Shinawatra for transferring National Security Chief Thawil Pliensri to an inactive post in a move that paved the way for one of her relatives to get the top police job.

We are yet to end up with a 2006-style coup, but the latest court move is viewed as a jigsaw piece in the unfinished mission of the People’s Democratic Reform Committee (PDRC) to clip the wings of the Shinawatra family.

That’s not all. The Office of the Auditor-General (OAG) has asked Ms Yingluck to pay some 3.8 billion baht for organising the Feb 2 election that was annulled by the Constitutional Court two weeks later. Instead of sending the bill to those blocking the general election, the OAG has chosen the easy target.

As if it were all not bizarre enough, Democrat Party leader Abhisit Vejjajiva has threatened to boycott the next election roughly scheduled to be held in July, ignoring calls by the world media and international organisations to take part in the polls.

Mr Abhisit has set down a precondition: a guarantee that his party be able to campaign safely nationwide. But he's forgetting to ask PDRC secretary-general Suthep Thaugsuban, a former Democrat executive, not to block the elections first.

As the anti-Shinawatra alliance accelerates its drive, certain election commissioners have been dragging their feet in holding talks with the caretaker government and concluding details of the next election. The new Senate speaker has also made efforts to convene a discussion with relevant agencies in what many believe chimes with Mr Suthep’s demand to put in place a "neutral" prime minister.

It is not all darkness. The military refuses to get trapped or fool themselves into believing that they can step in to end another round of political conflicts after Ms Yingluck was ousted. Legally speaking, the next-in-line caretaker prime minister Niwatthamrong Bunsongpaisal is still functioning.

While the tug-of-war over different constitutional interpretations is the order of the day, so the anti-government side has become the daily target of blasts and bombs. Lawlessness is the state of Bangkok today.

As the political situation gradually slides into much-feared violence, the PDRC is making moves that remind us of our unpleasant coup d’etat past. Several decades back when such coups were more familiar, we were accustomed to the sight of soldiers laying siege to TV stations and newspapers.

Now it’s the PDRC and their affiliates who are occupying the grounds of media organisations, physically trying to stop independent television channels from doing their work.

Many are stunned by the compromising tone of the mainstream media, which has failed to outright condemn the blatant threats to press freedom.

No less lousy than the PDRC, Capo has threatened to take legal action against members of the media if they comply with the demands of anti-government protesters.

Some hardcore Yingluck/Thaksin fans are disappointed the rally organised by the United Front for Democracy against Dictatorship (UDD) at Utthayan Road is merely reacting to the PDRC's protests, as opposed to being a strategic and aggressive political move.

To an extent, the UDD seems to be holding its ground and waiting for the anti-government alliance to destroy its own legitimacy, as the PDRC stumbles with its attempted seizure of Government House and bid to install a non-elected prime minister.

However, some independent and progressive members of the red-shirt camp are worried about attempts within the movement to link the monarchy to the political conflict, especially the increasing presence of banners, screen-printed T-Shirts, and cyber messages saying “We love the Crown Prince” alongside the UDD’s "Crush the rebellion" rally slogan.

Mobilising the masses again is no easy task. That’s not such a big problem for the ruling party or for those who are still fiercely loyal to the ousted brother and sister. But many are wondering how long their supporters will be willing to fight on this time, given that core UDD leaders have done little or nothing to help existing political prisoners. Pheu Thai’s wholesale amnesty bill, which opened the political Pandora’s Box, is still fresh in many minds.

Supporters of the two opposing sides are marching on in suicide missions as those behind the PDRC and UDD refuse to talk or compromise. Meanwhile, the economy and long-term competitiveness of Thailand is taking a deep plunge into the political abyss.