Don’t muzzle the media, bring them on board
Opinion

Don’t muzzle the media, bring them on board

Media freedom has been threatened by the declaration of martial law at 3am on Tuesday — however much that step may have been welcomed by many as a way to prevent a descent into violence. 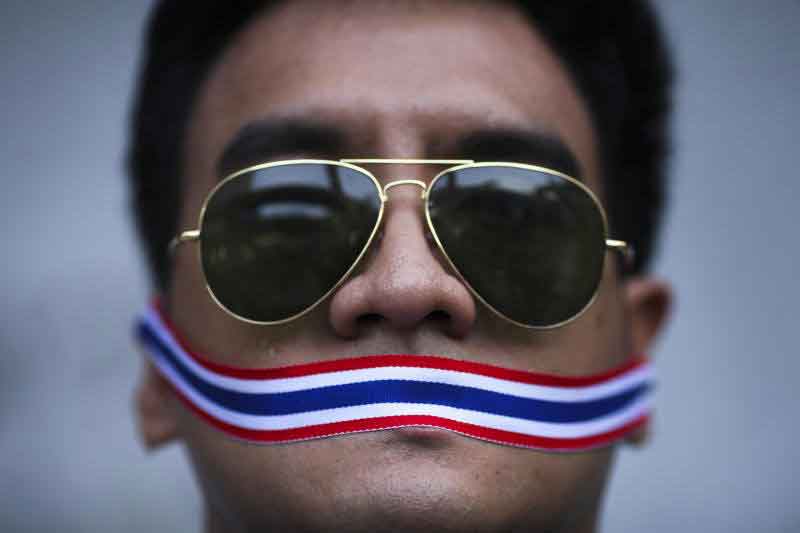 A protester covers his mouth with a band in national flag colours to oppose martial law at a demonstration in front of the Bangkok Art and Culture Centre. (Photo by Patipat Janthong)

I did not like seeing the picture posted on Facebook last night, showing soldiers with red armbands sitting inside a multimedia group known for being outspoken. Though annoyed, I was not surprised when I failed to find the post shortly afterwards. The station, however, was later reported to have been allowed to air, unlike another station, known for its anti-government leanings, which was banned, at least for that moment.

Such treatment is discrimination and may fuel even more division, however much the generals may try and justify it. A number of community radio stations were also banned, another questionable move; though some of these may have been heard to be rabble rousing. This is no time to pick and choose: authorities must demonstrate that one rule is for all, and show as much impartiality as possible.

Remember the ultimate goal: returning the country to peace and normalcy. Combing through social media is fine, but let’s not go overboard, for expression will out. There’s YouTube. There is foreign media. There can be debates at home or abroad. And there is always the old-fashioned way of getting stories out by entrusting tapes and the like to travellers, who act as "pigeons".

None of the threats and warnings to the media about staying within boundaries bode well for our stop-start towards democracy after 82 years. We have seen too many coups and too many governments that have proven downright despotic and dictatorial, despite their arrival on the wings of so-called democracy. It's time for change, and a step forward has been made. But the army must prove that martial law is not a coup. If the media are threatened, we are very close to that step toward the precipice.

When the media are threatened, those with the power to call the shots effectively give themselves away as insecure. Why worry, if you are convinced you are doing the right thing for the country? Gen Prayuth Chan-ocha, the army commander-in-chief, had seen enough blood spilled and now needs the courage of his conviction to follow through by bringing rivals to the negotiating table. As the man in the driving seat under martial law, he should chair the talks proactively, rather than as a shadow or a shepherd.

A third party is needed, bringing together mature men and women, the younger generation of various persuasions, media, non-government organisations, business, academics and lawyers. Ideally there should be public hearings on what these people propose. It could be done in a short time through a mechanism like change.org or social media like Line and Facebook. Speed is of the essence because we have already spent a lot of energy in the past six months, though none of it has been to no avail. People have awoken and formed opinions; now is the time to gather, compile and screen those ideas.

Martial law has helped put the brakes on violence, but it can only be effective within a certain timeframe. Don’t forget, the generals are using a device that was created 100 years ago. While that may give weight to what they are doing, some updating is in order. The longer the generals tarry, the more detractors will give voice to opposition.

The media must be a component of the process for change because they are catalysts as well as messengers. The transition to digital media makes this a timely moment because more people with a wide range of experience are involved. We must draw on this pool of experience to improve matters for the country. When 48 digital televisions are up and running, the army won’t have the manpower, or womanpower, to muscle into their studios to ensure they stay within outdated boundaries. Get the media involved and there should be fewer critics. But make sure the context is right for a variety of media to join.

Information technology has made it easy for the generals to draw in the media. With the click of a mouse, they can set a teleconference in motion. No need to get people dressed up in suits and traverse a city that is already gridlocked. If the media is given a chance and plays its part well, we will race streets ahead, and debunk all those foreign news people who have been pouring scorn on us, writing about us as being some kind of a banana state.

The foreign media should look at their own situations before pontificating over us. Do their governments allow freedom of expression and choice? What about violations of rights to privacy? As we well know, the United States, which is currently pressing us to adhere to democratic values, has been atrocious about privacy rights, prying into the affairs of friendly states, as well as its own citizens with means too dastardly for words. Speaking up and acting against hackers demands commensurate behaviour: respecting other people’s rights to their own lives, and other countries’ rights to do what is in their interests.

With the generals rising up against the media, the situation has come full circle. Late last year, at the height of the anti-government protests, a number of television stations, notably Channel 3 and Thai PBS, were confronted by delegations of protesters demanding space and support. The media becomes sandwiched between two opposing sides when crisis breaks out, so let’s defuse this one as soon as possible.

The Thai Reporters and Journalists Association promptly condemned last year’s move. Appropriately, the TJA again are releasing a statement on the latest threat to media freedom.

Let the media report and analyse. We have moved on from Black May 1992, when the curtain was drawn on television broadcasts and the press was virtually compelled to report little more than official statements. We now have an Official Information Act, which, for all its imperfections and procedural delays, has raised public awareness of the right to know, and drawn the media to apply it to access information possessed by state agencies. What needs change is the OIA’s discouragement of officials from disclosing information.

Internationally, under 10 "Right to Know" principles drawn up by the Open Society Justice Initiative, access to information is the rule and secrecy the exception. What could be more conducive to secrecy and a return to the dark ages than threatening media freedoms?