Some may call it a coup d'etat. Some may say it’s about time. Some may realise that it’s the only realistic solution to the political impasse.

Suthep Thaugsuban and Jatuporn Prompan may spit and spat back and forth. Activists, academics and journalists may argue constitution, law and democracy.

But when central authority has collapsed, the rule of law broken down and society faced with protracted  violence and anarchy, the only force with the power to bring back stability is the military. 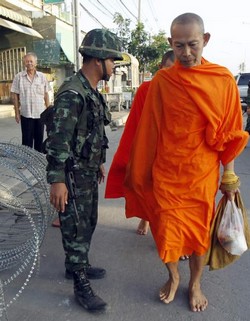 Barefoot Buddhist monks pass a military checkpoint near a red-shirt protest site in Nakhon Pathom on May 22, 2014 (Reuters photo)

Therefore, Thailand is under martial law.

If there is ever a right moment for the military to step in, this is it. As an added bonus, it is also when Suthep has nowhere else to go. Again, it’s all about timing. Passing the ball, if you will.

Also worry not, those who fear a military dictatorship. Democratic elections will return; it’s just a matter of when and how it will be arranged by those in charge.

Whatever the true intention of the military, everyone has their own theory based on personal bias and political agenda. But like it or not, we must deal with realities, and here are certain scenarios that may unfold.

Look for an interim government, appointed. Look for reforms, not necessarily to tackle corruption or to solve the education crisis, those issues take years, and we wouldn’t want an appointed government for years.

But definitely look for reform measures to ensure future political stability and economic opportunity. In this, look for factions and individuals to be persuaded to fall in line and do as told.

In addition, look for these measures to be more effective in setting Thailand on the ‘’right’’ course, as compared to after the 2006 coup.

Then, look for a reasonable period of time until the military is sure that the peace is kept. Three months, six months, a year, however long it may take.

After which, look for the return of the democratic election and things to actually go back to normal – well, normal for Thailnd, that is.

A scenario is mere speculation based on past lessons to ascertain likely future possibilities. If there is any certainty, it is that democratic elections will return.

In the meantime, how the military sets up a government and implements policies will give us a glimpse of which direction Thailand is heading.  They could very well speed the process to a general election. Or they may take their time in order to set things on the "right" course.

But most importantly, understand that this is a short-term solution. It would be sorely shortsighted to think otherwise.

Without real reforms and true democratic development, Thailand will always remain the middling country that it is, or likely tumble into worse.

Old problems will revisit. History will repeat itself. Just like once again, after some 82 years of so-called Thai democracy, tanks rolled into the streets of the capital.