Army chief Prayuth Chan-ocha justified his decision to stage yesterday’s coup as necessary to prevent further loss of life and stop the political conflict from escalating.

The rationale is short-sighted. Gen Prayuth may have good intentions at heart but seizing administrative power by force will only cause the situation to deteriorate further.

The army chief said a military takeover was necessary to return the situation to normal. He was speaking after the seven parties meeting to find a way out of the political crisis failed to find a solution after a second day of talks.

He said the coup will pave the way for people to come together and love one another once again, like in the past. 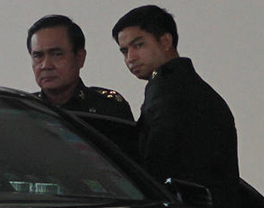 Army chief Prayuth Chan-ocha leaves the Army Club, where the meeting was held on Thursday, before he announced a coup. (Photo by Chanat Katanyu)

The army chief should know better. Gen Prayuth was part of the last coup-making effort led by Gen Sonthi Boonyaratglin that seized power from former prime minister Thaksin Shinawatra in 2006.

Over the past eight years, he must have witnessed how an anti-coup movement was born — the United Front for Democracy against Dictatorship (UDD) as we know it today.

Gen Prayuth must have seen how the coup-installed government led by Privy Councillor Gen Surayud Chulanont failed to restore unity or establish a sense of fairness.

He must have seen how the much coveted goal of national reconciliation has grown more and more elusive since the 2006 coup that was aimed at restoring peace and national harmony, the same goals as the coup he is shepherding now.

He must have known that we have arrived at the current conflict between the caretaker government and the People's Democratic Reform Committee (PDRC) in large part because of that 2006 coup.

There is no question the political conflicts have become entrenched, involving a complex web of conflicting values and political aspirations. They have also polarised virtually every citizen and interest group in the country.

As must be evident to Gen Prayuth, who assumed the role of refereeing the peace talks for two days, such deep-seated strife cannot be resolved quickly.

Adding another putsch to our lengthy history of coups will only deepen the entanglement, making it even harder to solve and inflaming anger among people on opposite poles.

In his first address, Gen Prayuth also said the coup was intended to allow reform of the country's political, economic and social structure to ensure fairness for everyone.

This is easier said than done. It's not that people are against reform. In fact they want it. But reform has also been identified as part of the agenda of the anti-government PDRC group. How could Gen Prayuth go about implementing it without being seen as biased?

In fact, if everyone had agreed to the reform agenda or procedure we would not be facing such deep political divisions and such deadlock.

The coup will prompt members of the international community to impose sanctions. The country's economy will suffer, turning into further hardship for ordinary citizens.

There is no doubt Gen Prayuth saw a clear and present danger when he decided to use force to take state power. He even said seizing power would prevent bloodshed and preserve national security.

The sad thing is it's the very act of a military takeover that is likely to stir up stiff resistance, provoke acts of violence and possibly cause more loss of life. This coup is not the solution.