Give and take key to good media relations
Opinion

Give and take key to good media relations

Gen Prayuth Chan-ocha, the army chief who has become the head of the National Council for Peace and Order, seems to need a crash course in media relations. Alternatively, he should consider fitting in an interim prime minister who can deal with the media.

So much was evident when he lamented the aggressive questioning of reporters from the Bangkok Post and Thai Rath. The Bangkok Post’s senior security reporter Wassana Nanuam asked how long it would take for the army to pave the way for general elections and Suparik Thongchairit of Thai Rath asked if a national legislative assembly and an interim prime minister would be in place “any time soon”.

This is standard practice. Journalists usually resort to tough questioning after a softer approach has failed.

The only exception that comes to mind is the British broadcaster Jeremy Paxman, who shot to fame with his interviews for Newsnight. Yet luminaries steeled themselves to be interviewed by the man, possibly because surviving his inquisitorial style was a benchmark of success. But Paxman is to be replaced soon. He will continue to host University Challenge, which has been one of the most highly rated programmes in England since the 1960s.

Hence, Gen Prayuth should be glad that he was born, lives and works in Thailand. Ours is a society that is deferential to elders as a matter of custom and consideration. But media has leaped forward with the advance of technology which has been a catalyst for change in media practices from followers of sources to more confrontational questioning of people perceived to be capable of solving problems.

Please Gen Prayuth, appreciate that you are living in an exciting era of change where Thailand is being convinced to move forward with technology, and the times. Having the means to information at the click of a mouse means also having access to how that information was obtained. Methods and methodologies are transparent in the eyes of a perceptive and experienced journalist.

Rather than be upset, Gen Prayuth should rise to the occasion, and show that he is up to dealing with aggressiveness in thinking, though it might be a different ball game from straightforward aggression on the battlefield. We live in the 21st century. Posing questions aggressively is a professional method that hardly detracts from the deference to elders to which the general is accustomed.

The two things do co-exist. Most importantly, Gen Prayuth should appreciate that aggressive questioning is a means to an end of informing their readers, listeners and viewers, all of which contributes to the intelligent society we seek. Media are not the enemy: this Gen Prayuth you must never forget. Treated fairly and sensitively, media are your best medium for conveying the message to the public.

Appointing spokesmen is practical. You cannot deal with all the questions the media and the public want to know at a time like this. But ultimately, the supremo has to manage his own media relations. There are many examples to draw from. Pick, choose and mix between the media policies of public figures.

Field Marshal Sarit Thanarat during the 1950s had no time for critical media and hit them with the famous catch-all Article 17. Field marshals Thanom Kittikachorn and Prapass Charusathiara kept a regime whereby newspaper editors and publishers had to kowtow to the powers-that-be, and behave properly in contentious times or lose their operating licences.

Ten years later, former prime minister Anand Panyarachun, for instance, showed liberal flair with the media in terms of allowing a latitude of questions. But the ground rule of this career diplomat was that he would only answer the question he wished to answer.

I remember this well in 1992, when Mr Anand was attending a regional conference on the Asean Free Trade Area (AFTA) in Singapore. He was enthusiastic about the benefits of AFTA and addressed many questions asked of him. But when I stood up to ask about the Non-Aligned Movement (NAM), a group Thailand then was considering joining, he seemed to mentally fumble and indicated his negative thoughts on NAM. As history knows, Thailand eventually did join NAM, which brought it into a grouping with many like minded countries, who seemed to have helped the country's international trade agenda advance.

During the late 1980s, the late prime minister Chatichai Choonhavan showed a different kind of laissez faire, with his trademark “no problem” peppering every utterance. But he gave little away. With Gen Prem Tinsulanonda through the 1980s, it was the paternal touch that reduced reporters to calling him “Pa”. He also gave nothing away.

Gen Prayuth might find all three policies interesting but he cannot withhold information, or impose blackouts as some predecessors did at times. He should remember this is the age of information and adopt a policy that suits him and the media now operating.

Gen Prayuth need not be smooth as silk about everything. Though some still question his legitimacy to lead the country, many believe he’s won legitimacy by breaking the political impasse, however militaristic the arrest tactics may have been. The follow-ups were not popular because they followed military procedure but by and large, people responded obediently to the invitations and summonses to report.

Among the first was journalist Pravit Rojanaphruk whose summons raised a storm for it tugged directly at the heart of press freedom. Pravit may have overstepped the mark on sensitive issues but his right to freedom of expression is sacrosanct, sanctioned as it is by international law, practice and Thailand’s constitutions.

Pravit’s critics roared over his antics, one suggesting that he carried the black masking tape in his pocket in order to use it when the opportunity arose to be photographed. The photograph went viral on Facebook but mainstream print media desisted, which shows the different judgement of print media.

Deserving of merit was the Thai Reporters and Journalists Association’s delegation to the junta, calling for Pravit’s release within seven days, and appropriate treatment while he is in detention. Discussed by social media in a more supportive tone was an “invitation for a chat” with Wassana of the Bangkok Post and Suparik of the mass vernacular daily Thai Rath, which followed some days later.

If Gen Prayuth was put out by media aggressiveness, a former minister who defied a summons to report delighted in using media. Chaturon Chaisaeng, a former minister of education, organised a press conference at the Foreign Correspondents' Club of Thailand and gave advance notice to the army about it. This surely was a bid for international publicity, and it succeeded. The headlines in well-respected press abroad suggested that the military sent out a “warning” by arresting Mr Chaturon “at a packed press conference”.

The picture on the front page of this newspaper on Wednesday spoke a thousand words. Mr Chaturon was all smiles, and mischief, the latter expression almost splitting his face. For the first time he had lost control, his habitual smile exuding charm with just a touch of defiance. How he will wriggle out of a court martial for defying the order to report will be interesting. Of course he must also be properly treated and given a fair trial.

Again media have been squeezed, on the one hand compelled to report for operating as journalists, on the other used by a politician in a bid to curry international favour. Whether or not this is part of an attempt to convince a respected and respectable foreign country to host a government in exile, we need the international press to tell us fairly. 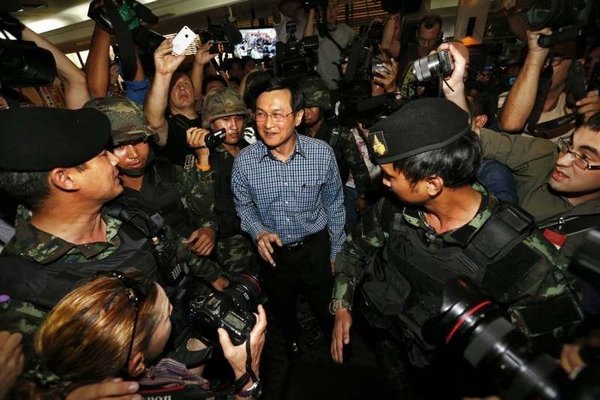 Chaturon Chaisaeng is placed under arrest at a chaotic media event that cynically used the media for his own means. (Reuters photo)