Discerning the sound of a military coup
Opinion

Discerning the sound of a military coup

Have you heard the sound of the most recent coup in Thailand? When such a phenomenon takes place in this fair land, the usual responses follow: foreign countries issue warnings as well as expected nominal sanctions, and urge the country to return quickly to the democratic abode of civilisation; while journalists provide “analysis” of the situation. 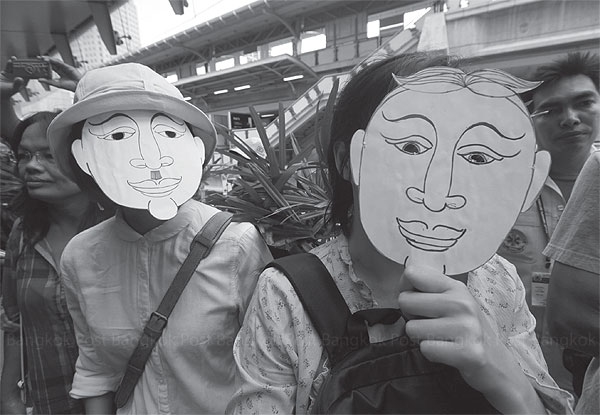 Protesters wear masks depicting stylised faces from traditional Thai paintings at a rally to express their opposition to the coup. Thiti Wannamontha

Such analysis, much of the time, is based on a universal narrative of a democratic journey encountering dictatorship. Responses from some patriotic Thais include: “we are too complicated, you don’t understand us”; “it’s none of your business”; or “please understand our situation and pray for us”.

Having been born under the spectre of a coup and having grown up under several of them, this most recent coup doesn’t surprise me. It forms part of yet another chapter in the biography of Thai politics. But this one worries me.

I am worried about both the degree to which the coup-makers understand Thai society and the nature of the coup itself. Since the former will reveal itself, here I will concentrate on the latter.

There are people who think of a coup as a political reset button which signifies a new, much needed beginning in the context of an impasse.

Maybe there is some truth to such a belief. But anyone who pushes the button might hear the sound of failure in the project he has worked on.

If it’s a computer game we are talking about, usually the reset button comes when one admits, rightly or wrongly, that he cannot win. As a result, there is no point continuing to play. Perhaps, one needs to hear the sound of this reset button.

If a coup has a sound, and if one tries to listen to that sound, what will be heard? I am certainly not referring to the generous flow of nationalist songs heard again and again by all who cared to eagerly await official announcements during the first two days after the coup. I would argue, however, that by listening to its sound, the meaning of this coup staged in the second decade of the 21st century might be better construed. But to do so it is better to go back in time.

In the 17th century, Cardinal Richelieu — the villain made famous by Alexandre Dumas’ The Three Musketeers — sent an agent to work in Rome. This agent, Gabriel Naude, later wrote in an interesting book titled Considerations politique sur les coups d’ etat (1639) that “…with coups d’ etat, we see the thunderbolt before we hear it rumbling in the cloud; in coups d’ etat…everything is done at night, in the dark, in the fog and shadows”.

Political science textbooks generally define a coup as a non-constitutional seizure of political control of state institutions. But seen as an event or action that doesn't submit to the laws, Michel Foucault — the French thinker — points out in his Security, Territory, Population (2007) that a coup d’etat is “the state acting of itself on itself, swiftly, immediately, without rule, with urgency and necessity, and dramatically. It is therefore not a takeover by some at the expense of others but the self-manifestation of the state itself. It is the assertion of raison d’etat (reason of state) that the state must be saved, whatever forms may be employed to enable one to save it.”

Foucault’s last sentence underscoring both the reason and the methods used crystalises the ontology of a coup. Despite noble purposes declared and valid justifications given, fundamentally a coup is a military solution used on political problems, characterised by the threat of violence against those who refuse to submit.

It goes without saying that a military solution is generally considered the “last resort” to be used when other methods, diplomatic ones in international affairs or national dialogue in domestic affairs for example, do not work. In this sense, the silent sound of a coup is a sense of despair that existing political processes no longer work and a society cannot solve its problems politically.

As the country embarks on a journey out of the coup, the coup-makers must effectively solve existing problems plaguing people and craft a new rule of governance.

The first phase, as outlined by Gen Prayuth Chan-ocha, the leader of the National Council for Peace and Order, on May 30 is to rebuild national peace and unity through reconciliation.

And here lies any coup’s paradox. Rebuilding peace through reconciliation in a badly divided society requires hope in a society's political potential. And it requires hope that conflict can resolved through political methods based on reason and dialogue.

If it is to rebuild national peace and reconciliation, the NCPO has to walk Thai society out of a sense of hopelessness echoed by the sound of the coup. A difficult but necessary task at present is to rekindle new hope that conflicts in Thai society can be dealt with politically and therefore peacefully.