A few years after disappearing from the public eye, environmentalist Sutthi Atchasai, who was known for his relentless fight against Map Ta Phut pollution, shot himself at his house in Rayong on Tuesday, much to the distress of his family and friends.

His family said Sutthi suffered from stress. His restaurant was a flop and the environmentalist’s business had plunged into debt. His family did not think foul play was involved in his premature death. 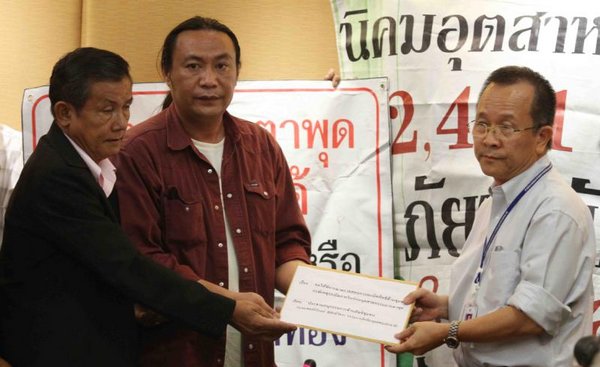 After a particularly dangerous factory explosion at Map Ta Phut in 2012, Sutthi (second from left) submitted a a letter of complaint to Niran Pitakwatchara of National Human Rights Commission. (Photo by Pattanapong Hirunard)

While far from being a national-level activist, Sutthi was well known among those who are acquainted with pollution problems and the Map Ta Phut industrial estate.

Sutthi began his career as an non-governmental organisation officer in the area of housing rights for the poor after graduating from Ramkhamhaeng University.

In 2003, he decided to go back to his hometown in Rayong to live with his family, helping the family take care of its fruit and rubber orchard, while pursuing his interest in development issues.

Sutthi was a typical local hero in every way. In fact, he was the perfect example of an ideal citizen for any society. Through his belief in local activism, he advocated for the poor’s housing rights and launched conservation projects in his home province. As the pollution at Map Ta Phut intensified, the environmentalist spearheaded activism against the polluting industries in the Map Ta Phut area. In 2005, he set up the Eastern People Network of Thailand and served as a coordinator, leading a series of fights for environmental justice for local people affected by the hazardous industries.

Sutthi raised the issue of Map Ta Phut’s carrying capacity and highlighted cases of industrial accidents, as he was pushing for change the industrialists merely wanted to expand the activities in the area. He was key in obtaining the pollution control zone status for Map Ta Phut to ensure anti-pollution measures were put in place.

Due to my changes of duty at work, I lost contact with Sutthi who for some time also took an interest in politics. He joined the then People’s Alliance for Democracy group in protests against the Thaksin Shinawatra regime. He was a member of the newly established New Politics Party in 2009. I would follow his movements in the news.

After he became active in politics, he said in a media interview that: “it’s not politics for politics’ sake”. Instead, he held a firm belief that politics must ensure fair access to natural resources for the people. Sutthi never abandoned environmental issues. In 2010, he was among a group of Southeast Asian activists who were arrested during a protest against coal mining in Indonesia.

Also in 2010, Sutthi gained much recognition for his role in the establishment of a four-party panel handling Map Ta Phut pollution problems during the tenure of the Abhisit Vejjajiva government. The panel, which was under former prime minister Anand Panyarachun, comprised all stakeholders from industries along with academics.

Sutthi led a protest in Map Ta Phut that year as the Abhisit government crushed some key recommendations made by the Anand panel in a bid to open the way for industrial expansion in the area. That was around the time he started to fade out of public view.

During my research on the Map Ta Phut issue last month, I talked with local leaders and academics who have worked on this issue.

I asked if anyone had heard from the environmentalist recently or knew how to contact him.

I would have liked to have heard his opinions about the progress (or lack of it) at this infamous industrial estate and the flaws in the public hearing of the amended Map Ta Phut city plan, which must have enormously upset Sutthi.

I would have liked to have known as well if he had any hope in the junta’s order which places the Map Ta Phut issue under the responsibility of a deputy junta head. Would that be better — or worse — than that of a civilian administration?

But all the people I talked to said they had not seen the environmentalist for a while and no one had the slightest idea how he was or what he was up to.

News of his death early yesterday was the last I heard of this local hero who, at 38, died too young. RIP.