Ousting one monk won't save the clergy
Opinion

Ousting one monk won't save the clergy

With reform being the mantra of the moment, it was no surprise when the military junta finally cast its stern eye onto a clergy that is plagued by corruption and wayward monks.

Don't bet on any real change, however.

Last week, the junta announced the setting up of a committee to identify problems in Buddhism and come up with policies and measures to tackle them. 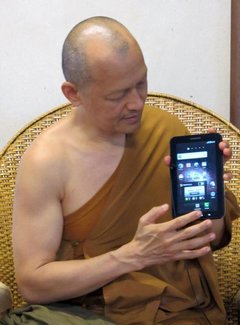 As an agency working directly on Buddhist affairs, the National Office of Buddhism has obviously felt the need to show the country's new boss that it is doing something.

Its priority, however, is not tackling monks' laxity and rife temple corruption, which has long shaken public trust in the clergy. Instead, its first self-assigned job is to get rid of a popular monk who told his followers to forgo rites and rituals and concentrate instead on the teachings of the Buddha in the Tipitaka scripture.

The proposals for Sangha reform will primarily come from this agency. Now you know why I think this whole exercise will end up being a waste of time.

The popular monk whose ostracism is being considered is Phra Kukrit Sothipalo of Wat Na Pa Pong in Pathum Thani.

A soldier by training who gave up guns to become a forest monk, Phra Kukrit has earned a big following for his no-nonsense approach to Buddhism.

He not only told his followers to give up rites, rituals and worship, he even told them to forgo the teachings of Buddhist monks and masters. They are all interpretations of the Buddha's teachings, he said.

The best way to learn Buddhism is to go directly to Buddhavacana or the Buddha's words themselves as they appeared in the Tripitaka.

His outspokenness, focus on the scriptures and simplicity appeal to a large number of urban middle-class people who are fed up with the out-of-touch clergy who cannot offer them meaningful answers.

Here's the glitch. Thai Theravada monks must subscribe to 227 training rules (Patimokkha) which are to be recited every Uposatha Day, or Wan Phra in Thai, which is marked by full and new moons. Phra Kukrit said it would be sufficient to recite only 150 of them.

He backed up his stance using some texts from the scriptures. Many Buddhist authorities cited other texts in the scriptures to back up their disagreement with him.

His original temple, the famous Wat Nong Pa Pong forest monastery, cut him off after his refusal to back down from his controversial proposal.

In short, Phra Kukrit's Patimokkha controversy is not new. Why do the Buddhist authorities want to pursue it now?

In terms of popularity, his Buddhavacana movement is now only second to the Dhammakaya movement. Now that the Dhammakaya has a strong influence on the top echelons of the clergy, many people have begun to think the motive for persecuting Phra Kukrit is political rather than religious.

Let me make clear that I am not a follower of Phra Kukrit. It doesn't matter to me how many training rules monks recite. What matters is how they behave.

Getting rid of a monk who encourages people to study the scriptures, but ignoring rogue monks, temple corruption, and the danger of right-wing Buddhist nationalism, is farcical.

To clean up the clergy and make it relevant, the elders should look inward and see how its closed, feudal system is actually the breeding ground for many of Thai Buddhism's current problems.

The Buddha teaches the path to spiritual freedom, yet the Thai Sangha is suffocated by despotism that punishes diversity and is mired in a closed system that lends itself too easily to corruption — not only of financial matters but also their souls.

The Sangha Council is scheduled to "look into" the Patimokkha controversy today. Instead of making Phra Kukrit a scapegoat for what is wrong with the clergy, the elders should realise that the emergence of new religious movements — be they Dhammakaya, Buddhavacana, or Santi Asoke — all arise from the public giving up hope on the mainstream clergy.

Forget persecuting Phra Kukrit. The real enemy of the mainstream clergy is not Phra Kukrit, it is the enemy within.