NCPO facing its toughest challenge yet

With the appointment of the prime minister and the upcoming selection of the cabinet and reform council members, the country is entering the second phase of the roadmap as set out by the National Council for Peace and Order (NCPO). This second phase is when most of the reform work and preparations for the return to democracy will be done. This phase will also be critical for the NCPO as its success or failure will ultimately rest on achievements in this period.

There is no doubt that in the first phase, the NCPO has been successful in restoring order in the country, fending off expected violent clashes and armed attacks on protesters. Resistance has been subdued without resorting to force. 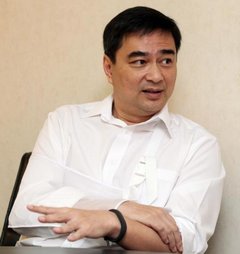 Abhisit: 'There are genuine concerns about the process and prospects of reform.'

The junta addressed many outstanding economic and social issues, most notably paying off debts owed to farmers. It also cleverly picked up issues such as cleaning up mafias, which played to its own strengths.

All this has enabled the NCPO to consolidate power. By the time the National Legislative Assembly (NLA) selected the prime minister, the choice of Gen Prayuth Chan-ocha had become inevitable. The general himself is largely viewed as sincere, decisive and on top of issues.

Yet there is little room for complacency in the second phase. The challenges facing the NCPO, the government and the reform council will be different in nature, and there are many factors at work that will make them hard to overcome. The main challenges will be the economy and the reform process.

On the economic front, the political calm and some actions taken by the NCPO have undoubtedly restored confidence and created hopes of faster growth over the next year. Yet much uncertainty remains. The continuing economic volatility and conflicts around the world mean the economy cannot depend on global markets to provide reliable engines for growth. In addition, there remain damages to the country's past policies which cannot be fixed quickly.

As far as the domestic market is concerned, despite rising confidence, purchasing power is not strong. The budget for the upcoming fiscal year is unlikely to provide much stimulus unless there are substantial amendments. The government is held back by debt obligations from past policy failures. The rice-pledging scheme alone is going to cost more than 70 billion baht in this budget (and will do so for at least the next four to five fiscal years), without a single baht going to farmers.

The government should explain these constraints and allow the NLA to trim inefficiencies from the budget (including corruption costs) and release money to stimulate the rural economy suffering from low agricultural prices (particularly rubber and rice).

The NCPO needs to accept that some subsidies may be necessary for growth and redistributive objectives and a well-designed policy needs not be corrupt, inefficient, or disruptive to the market or longer-term reforms. At the same time a medium-term financial strategy for infrastructure should be made explicit.

Other sources expected to aid recovery include increased trade as the Asean Economic Community is established and tourism. Expediting the passage of supportive legislation will help the former while a judicious timing to lift martial law will help the latter. Much work therefore remains to be done. A strong economy would contribute to political stability and allow the reform agenda to be carried out more effectively.

Turning to reform itself, the appointment for the reform council should be completed by October. The lack of confidence about how much influence the council has given the structure laid down by the constitution means we have not yet seen many high-profile people applying.

The success of reform will therefore depend on how effective the council will be in articulating concrete reform measures and convincing the public that they are what the country needs so the proposals will be taken up by the government, by the NLA and by politicians in the third phase.

For that to happen the right environment has to be in place. Reformers have long talked about a holy trinity — popular support, political will and technical expertise. Unfortunately, the current setting is not conducive to provide them. We do have popular demand for reforms, albeit without a coherent vision of what reforms entail. We have a strong leader who wants to see reforms succeed but is reluctant to spell out that vision for fear of being accused of dictating the substance of reforms. Finally, it is not clear what the role of those with expertise is in the reform process.

Gen Prayuth himself seems to be a little frustrated by the reform process already, complaining about the criticisms leveled at the NCPO. While this is understandable, it is also important to recognise why there are genuine concerns about the process and prospects of reform.

First, reforms need legitimacy if they are to extend beyond the NCPO, especially since the option of a referendum has been shunned. Second, some steps already taken have been seen to be counter to the reform spirit, particularly in the areas of decentralisation, police reform and energy reform. Third, proposals on political reform that have been presented so far are piecemeal and are often confused. Finally, it is expected that the cabinet, like the NLA, will be dominated by conservative and bureaucratic forces and therefore unlikely to be reform-friendly.

All this can still be fixed. Gen Prayuth can set a clear direction and provide a theme for reforms. Something along the line of less state power, transparency, good governance and justice is uncontroversial. He should signal a willingness to allow debate and participation, maybe even a referendum.

People are realistic enough to know that not all expectations will be met. But they do expect a sincere and determined effort from their leader. If the next year cannot deliver all reforms, at least it should allow people to glimpse what post-reform governance should be like — a regime that steers away from corruption, cronyism and nepotism. Failing at that would be unforgivable.