Thailand has set the global standard for how a country can effectively respond to Aids. And as a key member of the Association of Southeast Asian Nations (Asean) it also has initiated policies which have changed the region's approach to HIV.

From the very first time I visited, I was impressed by the country's dynamic response to the Aids epidemic. In the early 1990s, when many countries were still in denial, Thailand made HIV prevention a priority. The leadership, backed by a grassroots movement, sparked a large-scale HIV information campaign, popularised the use of condoms and showed the world what can be achieved when political commitment meets bold action. New HIV infections have fallen dramatically, from more than 140,000 in 1990 to 8,200 in 2013. As the epidemic evolves, Thailand continues to break new frontiers. 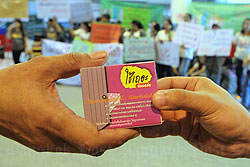 This month, through its innovative Ending Aids by 2030 strategy, Thailand became the first country in Asia to offer HIV treatment to every person living with HIV. Previously, people who were HIV-positive could only access life-saving anti-retroviral treatment after their CD4 count decreased to 350 cells/mm3. This approach is also working to prevent new HIV infections in the country, since we now know that people on treatment are less likely to pass on the virus. I am confident that this new policy will improve and extend the lives of thousands of people and will reduce the number of new HIV infections.

Thailand is an innovator in public health, investing in infrastructure and providing crucial services even in the most remote areas of the country. More than a decade ago, it began extending universal health care to its citizens and free HIV testing and treatment very soon became part of the package. Since last year, migrants — both documented and undocumented — can access a similar benefits package. The approach to inclusion and leaving no one behind in Thailand is speeding up social transformation in the country.

Nearly 90% of the funding for Aids programming in Thailand comes from domestic sources. Thailand is preparing to graduate fully from international support by 2017 — a move that will place it among a handful of middle-income countries in Asia to have moved to self-reliance in the Aids response.

However, despite immense progress, Thailand estimates that almost 21,000 people died from Aids-related diseases in 2013. Even with an Aids response as advanced as Thailand's, HIV services still do not reach some people. Key population groups, including gay men and other men who have sex with men, transgender people, people who buy and sell sex and people who take narcotics via injection, are at higher risk of acquiring HIV and need to be reached with effective prevention and treatment services.

Stigma and discrimination impede access to HIV prevention and care services. While Thailand has used its public health infrastructure effectively in delivering services, there is a need to further tailor these services to meet the needs of key populations and expand community-based testing and treatment services for key populations.

Even as the country increases its investments in the Aids response, it is clear that health financing is no longer just about money — reflections are also needed on how to reduce costs and innovate throughout the health system. And now, more than ever, limited resources must be targeted. This means more strategic approaches to spending. I am confident that Thailand, as it has shown time and again, will continue to innovate and address these issues and move towards ending the Aids epidemic.

The lessons learnt from Thailand can lead the thinking on how to re-engineer approaches around the region. Through its Asean membership the country can use its voice to highlight the potential for change. As other member states reach middle-income status, they must transform public health financing — they can no longer depend on external sources to fund their HIV programmes.

Ending the Aids epidemic as a public health threat by 2030 is possible and must be a central component of the post-2015 development agenda. We have a fragile five-year window to ensure that the world is on track to ending the epidemic.

Thailand and other Asean countries can seize this opportunity. The strengths of the region are science, speed and scale. If we add strategic investing into the mix, we have a winning combination. With Thailand showing the way, the region could become the very first to end the Aids epidemic.